In what has the measure of a Dawn Wall-esque project, Matt Segal and Will Stanhope are back in the Bugaboos in British Columbia for their latest stint trying to free-climb the Tom Egan Memorial Route on the East Face of Snowpatch Spire. 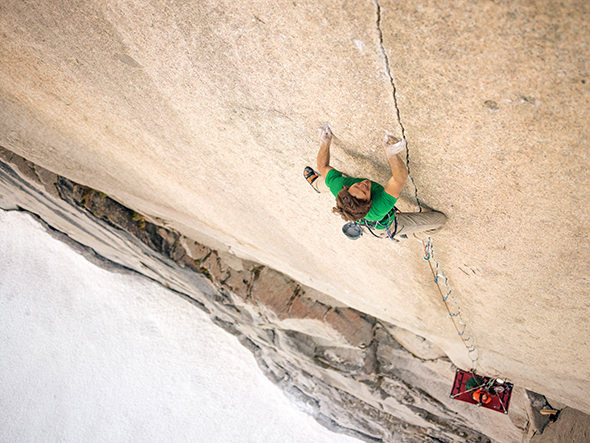 It is their fourth year trying to climb the 1500-foot splitter (thin finger) crack and they’re hoping that it’ll be their last! Their attempt last year ground to a halt by high temps in July and the constant downpours during August. Neither climber is looking to quit the project having invested so much time and effort already but their desire to free-climb the Tom Egan is starting to look like it’s got more than a passing resemblance to Tommy Caldwell and Kevin Jorgeson’s Dawn Wall Project which captured the attention of the world’s media back in January. 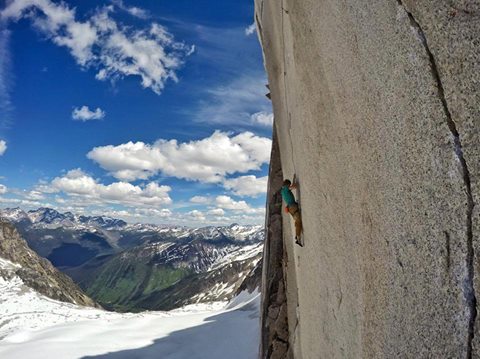 Will Stanhope working the hard opening pitch on the TEMR. Photo-Matt Segal Facebook

Segal and Stanhope have been back in the Bugaboos since June and it’s clear that whilst they’ve had some success they’re also hitting problems.  Posting on FB on July 2nd, Segal has been talking about their highs and lows:

“Big week in the Bugaboos filled with lots of ups and downs. This project is an emotional roller coaster, testing everything we've got. Progress is slow, it seems with every step forward we take two steps back.

This week in the mountains we endured some crazy electrical storms, the torment of bad conditions and the ill-fated moment of granite crumbling beneath my fingers (pitch still goes just a touch harder).

But on the bright side I made the team's best effort on the face pitch, only a few moves from sending and @willstanhope got the long awaited first ascent of the crux splitter pitch we call Blood on the Crack (5.14-). 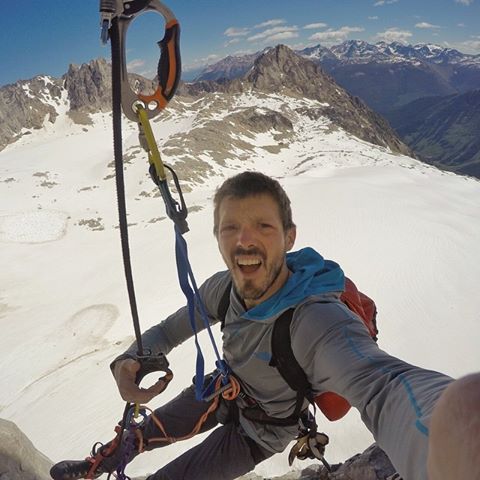 Whilst there are some similarities with Yosemite Valley, the Canadian Bugaboos are remote, wild and much more mountainous in their nature and appearance. The climbing season there is also much shorter – typically June to September. The climbing there requires commitment not only on the approaches and the routes but also against the elements as the weather in the Bugaboos can be heinous.

Segal and Stanhope have hauled their summer supplies into the base of Snowpatch Tower for the last three years running. They climb all day and then descend back to camp at night. For the last three years they’ve been working the pitches – much like Caldwell and Jorgeson did on Dawn Wall. The initial pitch of the TEMR was a massive problem – a blank wall before they could get into the crack system proper. After considerable effort and investigation Segal and Stanhope found a line of micro-edges which they eventually managed to string together and free-climb at 5.14. The first crack pitch proper is another 5.14 pitch which is followed by two 5.13 pitches up a super thin finger crack.

If Segal and Stanhope succeed it’ll be their hardest route of their climbing careers which is clearly impressive considering that both Segal and Stanhope have CV’s which include repeats on routes like Cobra Crack – Sonnie Trotter 5.14b Squamish testpiece. Both climbers have spent some time in Spain over the winter working on their fitness. Tommy Cauldwell is impressed with the effort and commitment that Segal and Stanhope are showing; “I find the fact that they stick it out up there in a tent year after year incredibly inspiring. I think it is probably the first time that someone has taken on a multi-year big wall free climbing objective that is so far from a road. It takes a incredible resolve and toughness to endure this kind of project for so long. I find that kind of commitment admirable above all else in my fellow climbers.”