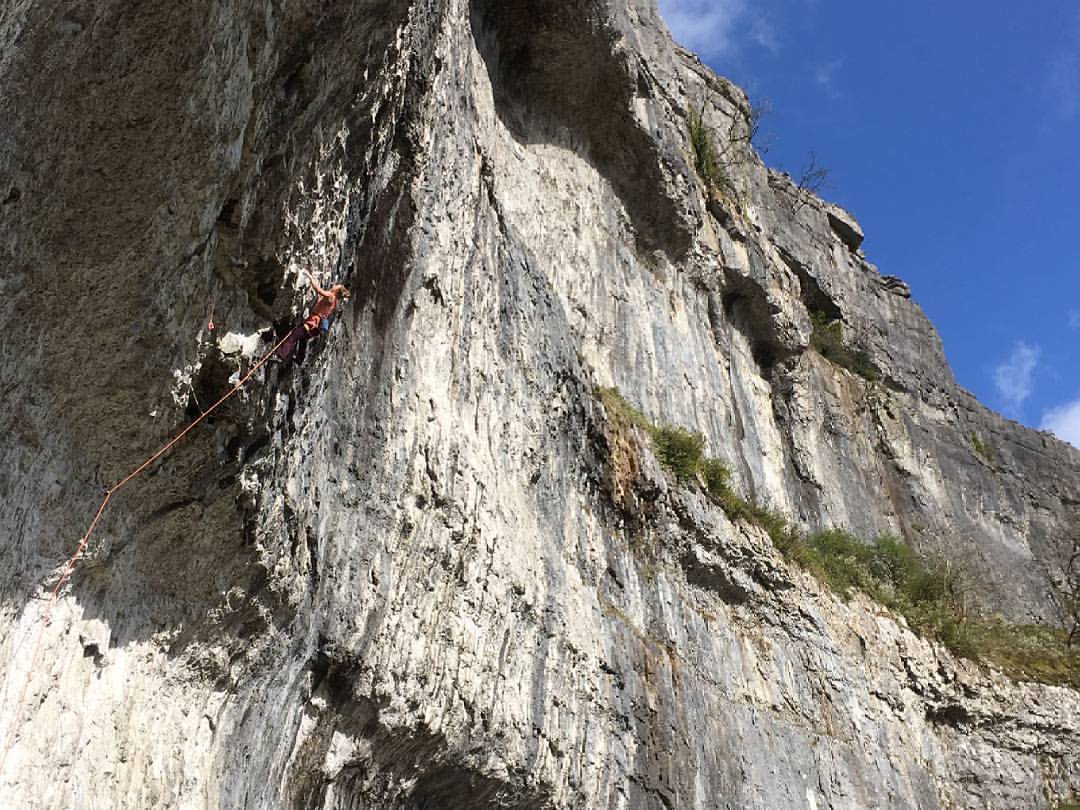 Madeleine – or Maddy as she’s better known as – has now joined the very select group of British ladies that have redpointed F8c. For the record, said group now comprises; Hazel Findley (Fish Eye and Mind Control), Mina Leslie-Wujastyk (Mecca Extension and Bat Route), Lucy Mitchell (Fish Eye) and, of course, Maddy Cope. We should also mention that Emma Twyford has done Unjustified (F8b+/c) and Katy Whittaker Mecca (F8b+). Time-wise, all these have been ticked-off since spring 2014. Previously, Lucy Creamer had redpointed Kalea Borroka (F8b+) in 2009.

Keen for the low-down, CLIMBER have been in touch with Maddy for the detail:

Great effort on Bat Route. You’ve been getting close for a while now - can you tell us how the redpoint went?

The redpoint went pretty smoothly to be honest. The conditions were good and I felt relaxed on the climbing (until the last easy bit where for some reason I got disco leg!). I had got through the boulder crux from the ground a few times before, but for some reason this time I was confident I could do it. I guess that is often how redpoints go. It was a bit surreal because the crag went totally silent the whole time I was on the headwall. There were some tourists at the bottom, who were probably a bit confused by the atmosphere!

A year ago you did Predator at Malham. You obviously like the place what appeals to you about Malham and do you think it ‘suits you’?

I really enjoy the style of climbing at Malham, it is a good mix of technical and burly climbing. The routes require patience since they can take a while to work out, but I like that, working out the sequence is my favourite part. I think it suits me, but only because I have spent quite a lot of time climbing there over the past couple of years. I think you learn to climb well at Malham by climbing at Malham. The crag itself is also a nice place to be, and there is always a good social scene on the catwalk.

Can you tell us about what you’ve been doing since you did Predator – lots of training and climbing probably?

I got a few niggles after Predator, so I didn’t climb much last summer. I had a good trip to Lundy at the beginning of September. I love climbing on sea cliffs and it was great to get back to trad climbing. I went to Yosemite in autumn with Ryan and did Freerider on El Cap, which was a great experience and something I had wanted to do for a while. When I got back I was psyched to climb at the wall (it felt like a welcome change from the early starts and hauling). There was a good training scene and I spent a couple of month’s bouldering, doing pull-ups, press-ups, or whatever I was tempted into doing with Mina or Michaela!

That’s an impressive step-up in a year – that must be incredibly satisfying to know that whatever it is you’ve been doing as worked so well. Perhaps you’d care to give us an insight into how did you prepared specifically for Bat Route – say physically and mentally?

Over the winter I bouldered at the wall, mainly on the motherboard at The Works (Sheffield). At first I could barely string two moves together, but after a couple of weeks I was managing to get to the top. This was pretty satisfying! Basic strength is probably a weakness of mine and since Bat Route has a boulder problem crux I knew bouldering would help. I also started finger boarding and doing general stuff like pull-ups and core. I enjoyed doing all this stuff in itself, and didn't feel particularly focused on whether it was going to get me up the route or not. I think this was good for me physically and mentally, because I felt like I had gotten stronger, which made me feel confident about trying the route. When I was getting close to the route I started to struggle a bit with my head. It felt like it took a lot of mental energy to keep trying to get through the boulder from the ground, and I felt like resting for the route when I wasn’t at Malham put pressure on the two days climbing I got in a week. I started to feel like I wasn’t actually doing much climbing! So on Friday I decided not to rest and went to the climbing wall. This took the pressure off and on Saturday I did the route!

We hear you’re off to Greenland soon? What’s the plan for there?

I would like to plan a trip to Greenland next year, but this year I am going to Morocco in October. I haven’t climbed much in the way of limestone multipitch routes, so I am looking forward to this. Generally, I would like to do more bigwall climbing trips.