Maddy Cope and Caff both send Once Upon a Timeâ€¦

The Dyer’s Lookout send-train was full steam ahead again today – this time it was James McHaffie and Maddy Cope doing the business on Once upon a Time in the South-West (E9 6c).

In doing both The Walk of Life and Once Upon a Time Caff becomes the third person to do both routes after Dave Birkett and Charlie Woodburn. “Yeah it’s been a top couple of days” Caff told CLIMBER, “these two routes have got to be the best two hard slab pitches in Britain.” 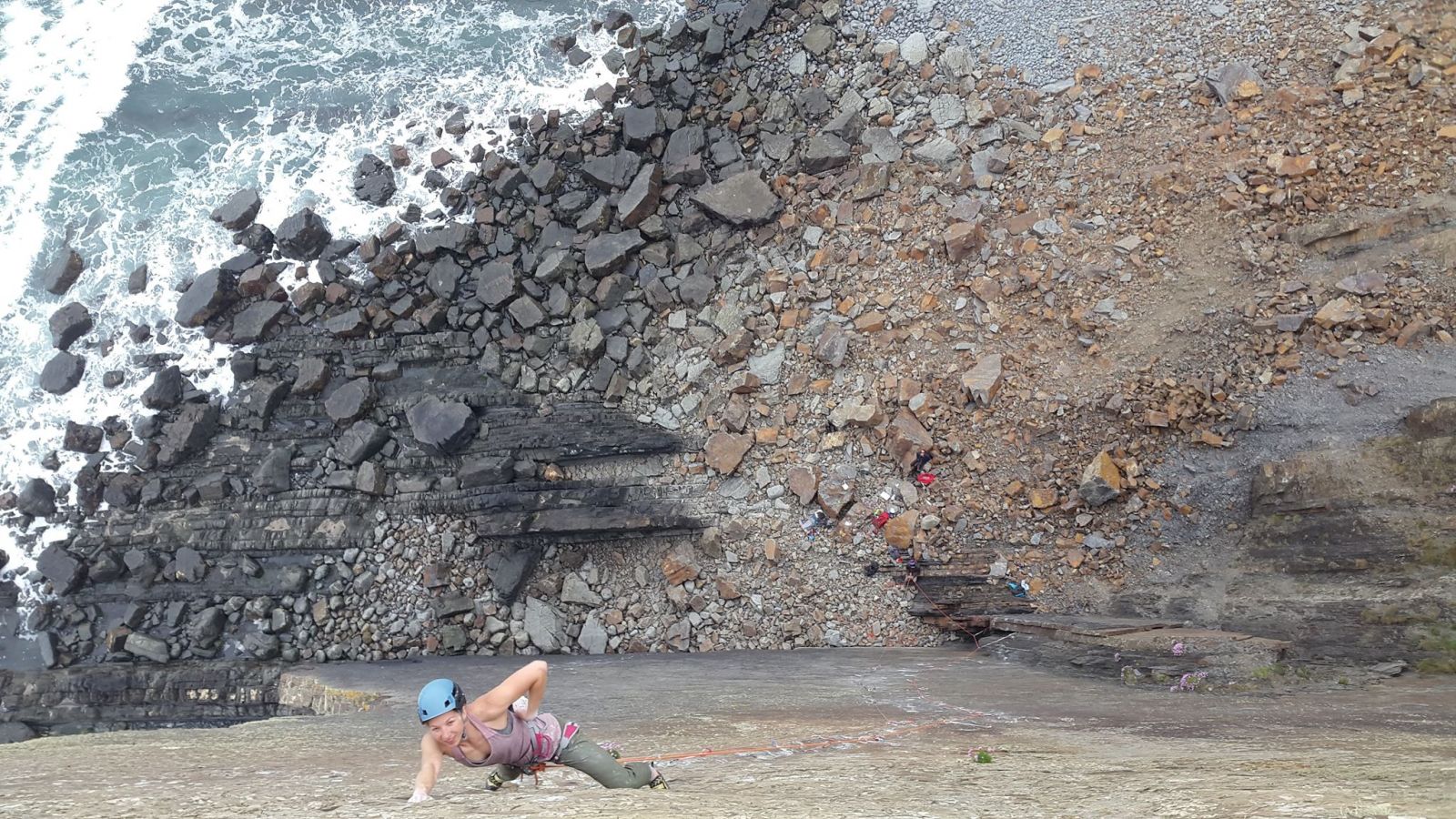 Maddy Cope repeating Once Upon a Time and adding her name to the select group of women to have lead E9 in the UK. Photo James McHaffie

Whilst Once upon a Time was Caff’s umpteenth E9 it was Maddy’s first. Maddy now joins a select group of British female climbers to have done E9 here in the UK; apologies if we’ve over-looked anyone but we reckon that group contains Hazel Findlay, Emma Twyford, Eve Lancashire and now Maddy.

Earlier in the week Caff had watched Ryan trying to flash Once Upon a Time ground-up. He’d tried it after Ryan as well. Caff told CLIMBER what happened: “I'd watched Ryan try and flash it and it looked hard. Low and behold I got to the same place and it was hard! Really knacky and blind. We got a 3rd of the way but I couldn't face a siege so looked at The Walk of Life instead.” Having ticked off The Walk of Life Caff turned his attention back to Once Upon a Time; “The day I did that [The Walk of Life] I rapped Once Upon a Time to check moves and kit. I rapped it once today to check the crux and some other gear then I led it. It’s just incredible, sustained slab climbing with a precarious crux and intimidating runnel to finish up. It felt like linking two E7 6c’s together; both sections are tiring on the toes.” Caff added that his ascent didn’t quite go according to plan: “I nearly blew the end of the runout above the pegs as I didn't hit it well and was a bit baked.”

Caff explained for CLIMBER how the two routes stacked up: “The Walk of Life is a bit more serious because of the start. But Once Upon a Time would be 8a if you had bolts in it I think. Both routes are outstanding.”

CLIMBER have also spoken to Maddy to get her take on her trip to Dyer’s and not least on joining the E9 team:. Typically, her rather understated answer was: “Yeah I guess it should be a buzz, but feels more like a calm happiness to be in one piece.  The route definitely felt a bit precarious but I think I made it as safe as possible!”

We asked how she prepared for her first E9 lead? “I didn't actually feel that prepared. I was excited to come down the Devon and have a look at Dyer’s Lookout - it's such a beautiful crag. My finger has still been niggling so I didn't even pack my good rock boots, thinking I wouldn't be leading anything hard. But I was surprised to feel OK on the climbing on top rope and I was inspired by the wall and the climbing. There seemed to be a lot of reasons not to try for the lead; old shoes, sore finger, bad skin, and Caff didn't make it look that easy, but I knew I would regret it if I didn't. So I just thought I would try and get as far as I could, no pressure really.”

So, was belaying Emma an inspiration or was it intimidating. “Belaying Emma was inspiring, though maybe her finger strength is intimidating! It was cool to work the route together and share the load of finding so many pieces of marginal gear.”

And should we expect to see Maddy doing more trad? “I always have a taste for trad, I love the style of climbing and the cliffs it takes you to. Because of my finger I have missed out on the classic spring sport climbing season, which is nice for building fitness and confidence. So it was nice to challenge myself, it feels like it has been a while. I'm looking forward to some more trad this summer.”

Finally, and as the weather breaks in the south-west, Maddy and Ryan are driving back to Sheffield. We couldn’t help but wonder if Ryan felt he’d missed out on the send-fest by trying Once Upon a Time ground-up. Maddy again: “I think it's a hard one to ground-up. The gear is really specific and the climbing is technical. In short, he will have to go back!”