British climber and adventurer Leo Houlding is currently attempting to make a first ascent on an enormous big wall in Arctic Greenland.  After a dramatic helicopter drop off, Houlding and crew have spent the last few days establishing a comfortable base camp and finding a safe approach through a complex glacier to the base of the Mirror Wall, a massive 1,200m high granite cliff (four times the height of the Shard in London). 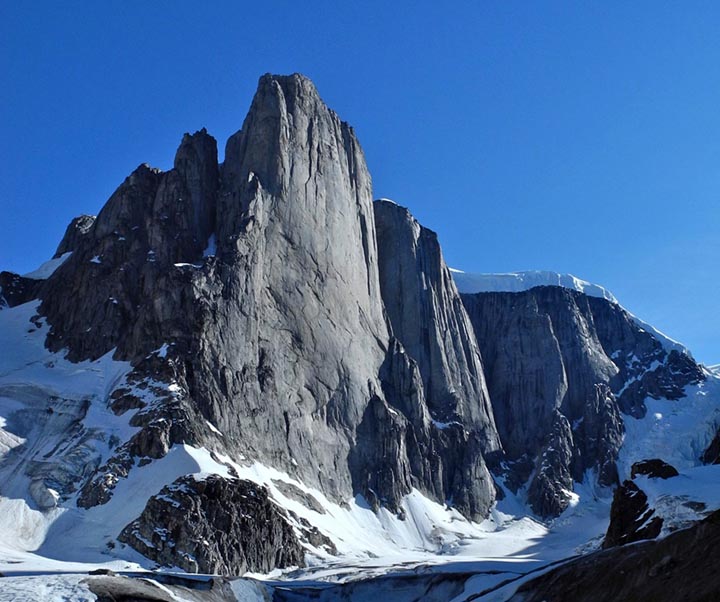 In a Berghaus sponsored expedition, he is leading a small team that hopes to be the first to complete a line on the wall’s north west face.  Situated in the rarely visited area of Renland, in north east Greenland, the Mirror Wall is huge, imposing and extremely remote.

Leo Houlding, 34, has assembled a team of ambitious young adventurers to join him on the trip.  He will share lead climbing duties with experienced South African climber Joe Möhle, 30, and 28 year old Matt Pickles, a talented sport climber from Todmorden, described as the “less manly cousin of well-known climber Jason Pickles”.  At 26, Sheffield’s Matt Pycroft is one of the rising stars of British adventure film making.  Pycroft, working with experienced climber and rigging expert Waldo Etherington, 27, from Dorset, will capture the expedition on camera for a series of short films.

The expedition comes after months of planning and logistical preparation.  Supplies were shipped to Iceland, flown by light aircraft to Greenland and then snowmobiled to an uninhabited hunting outpost deep in the Scoresby Sund fjord in early May, before the seasonal break-up of the sea ice.

During the melt period access to the region is only possible by helicopter.  The team left the UK in late June and after a stop off in Iceland, made their way by air to Greenland before helicoptering in to basecamp in the wilderness of Renland, not far from the wall. 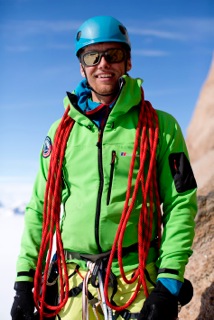 They have experienced stable high pressure systems with rising temperatures, resulting in great rock climbing conditions but poor and hazardous snow conditions on the glacial approach.  The team anticipates spending up to 15 days living on the wall in an attempt to free climb to the summit, hauling all their equipment and supplies, including hundreds of kilogrammes of ice, up behind them.

Leo Houlding comments: “There are precious few cliffs in the world that exceed 1,000m in vertical height, but right in front of us, in this little explored corner of Greenland, lies one such beauty.  The Mirror Wall is immaculate, a beautiful tombstone of glass smooth granite, taller than El Capitan’s Dawn Wall and set in this pristine but harsh Arctic wilderness.

“I’m a bit concerned about the snow conditions and serac bands guarding the approach.  Once we’re on the wall it looks pretty safe but properly hard!  We have spied a devious line right up the centre of the tallest, steepest part of the face and are all really motivated to get up there to see if it goes.

“None of the crew have been on this kind of trip before, but everybody has gelled really well and we’re working safely and steadily towards our goal.  I can’t wait to get established in a port-a-ledge camp high on the wall with this bunch.  It’s really an inspiring wilderness and if this stable weather sticks around, we’re in for a treat”.

Paul Walker of Tangent Expeditions, the world’s leading operator of mountaineering and ski touring expeditions to Arctic Greenland, adds: “After spending a lifetime climbing in the Arctic, I believe that the main face of Mirror Wall is the single most impressive unclimbed wall in the whole of Greenland.  It’s an extreme objective of the highest calibre in every sense - just getting there is a major logistical challenge.”

Houlding and his team have been equipped with the latest kit from Berghaus’ Extrem range, including prototypes of new developments scheduled to be launched in autumn/winter 2016.  Contact with the Mirror Wall team during the climb will be intermittent due to the limited signal, but updates will be shared as often as possible via @TheRealBerghaus and @LeoHoulding on Twitter and in a special section on the Berghaus website built for the expedition.