Late November means the Kendal Mountain Festival for many folk and as usual, duvet-wearing was totally de-rigour! Known colloquially as KMF, the Kendal Mountain Festival is one of the biggest photo and film, and literature festivals in the UK and it regularly attracts more than 15thousand avid fans. Said to generate some £2.5m income for the area, the KMF has been running since the 1980s. 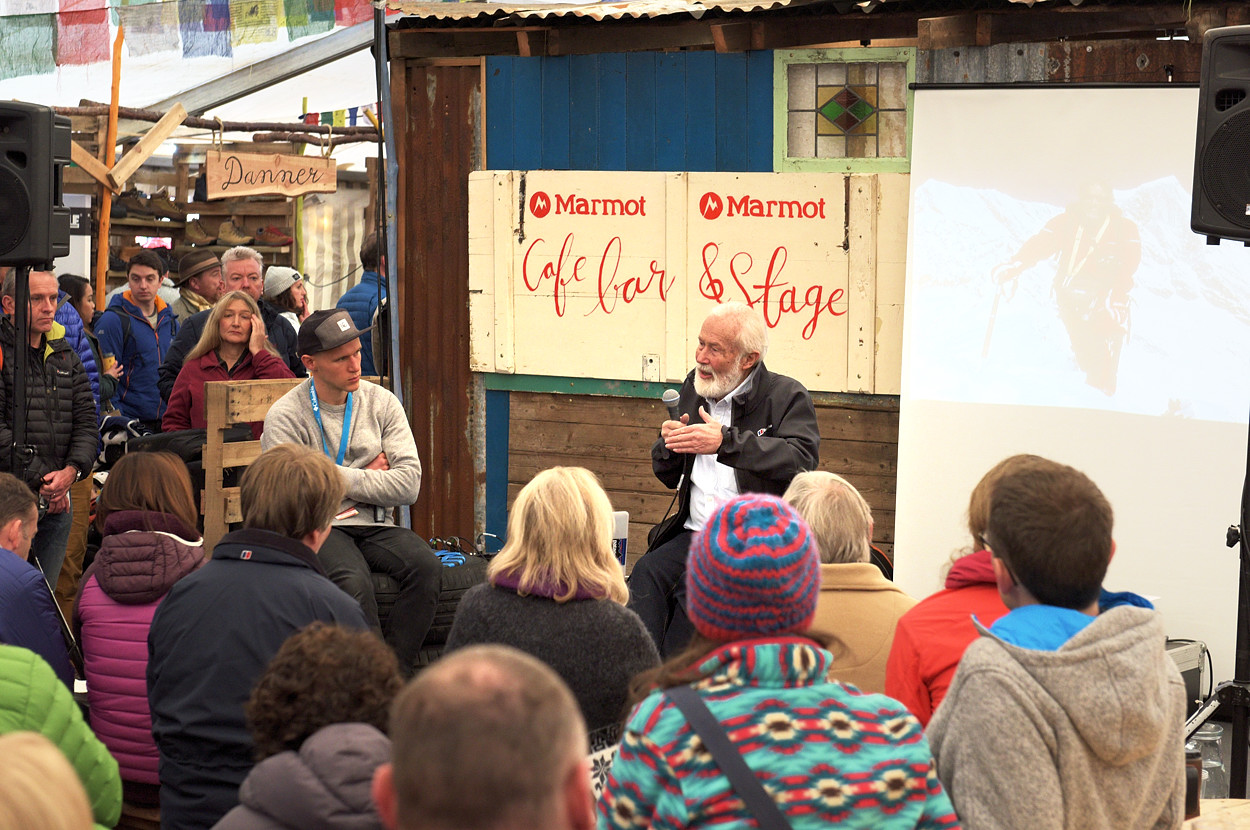 Sir Chris spilling the beans on the trials and tribulation of high altitude mountaineering on the Marmot Stage at the ever-popular Basecamp with Liam Lonsdale. Photo Keith Sharples

For 2017, and with more than a nod towards sustainability, KMF had drafted-in Seonaid Lafferty, a PhD student from the University of Cumbria to assist with reducing waste, including plastics, and increasing recycling. Patagonia, with their free repair service, once again helped push the re-use/repair message home. 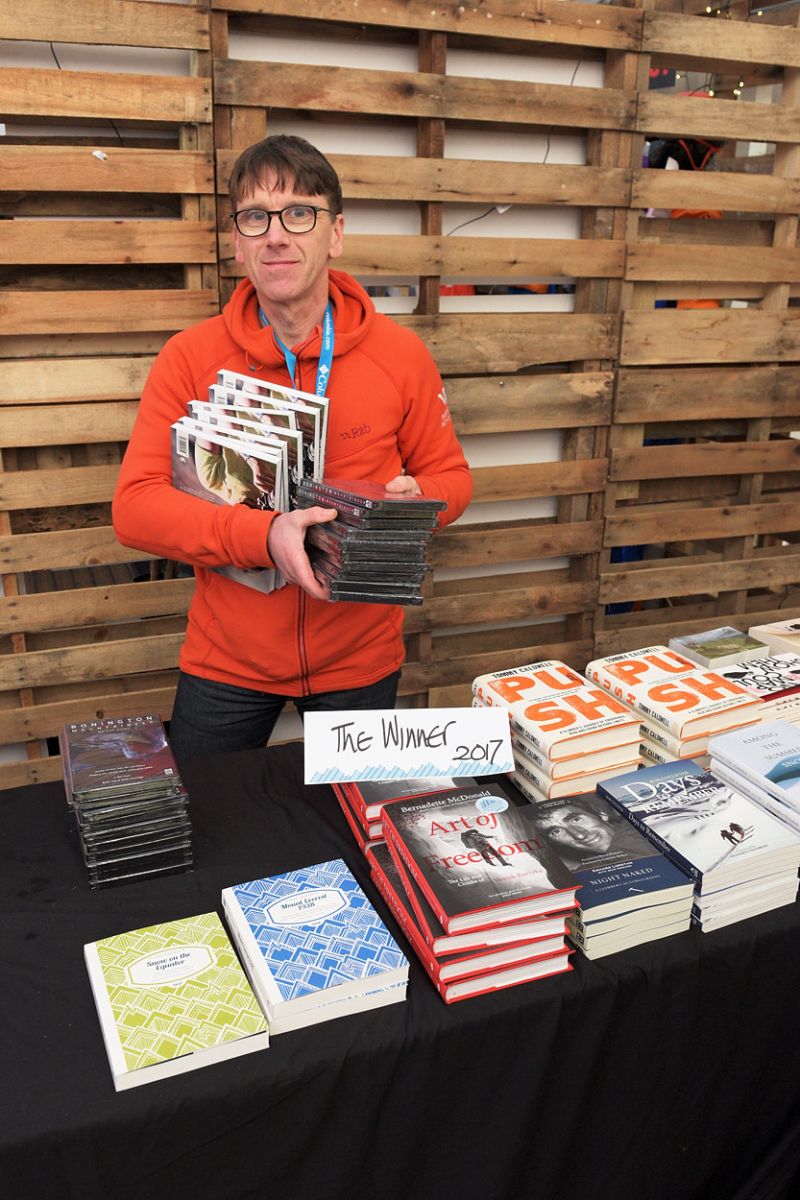 Jon Barton, MD of Vertebrate Publishing, with his hands full – as usual – of books on the official KMF Literature Bookstall. Photo Keith Sharples

Whilst kicking-off officially on the Thursday evening, the main events run Friday through to Sunday. One of the biggest festival events on Friday afternoon was – as usual – the Boardman Tasker Award. It’s reckoned to be the biggest mountain literature award world-wide and not understandably it attracts considerable interest. This year’s winner, Art of Freedom by Bernadette McDonald, was a biography of Voytek Kurtyka, said to be one of the world’s most complex and reclusive mountaineers. 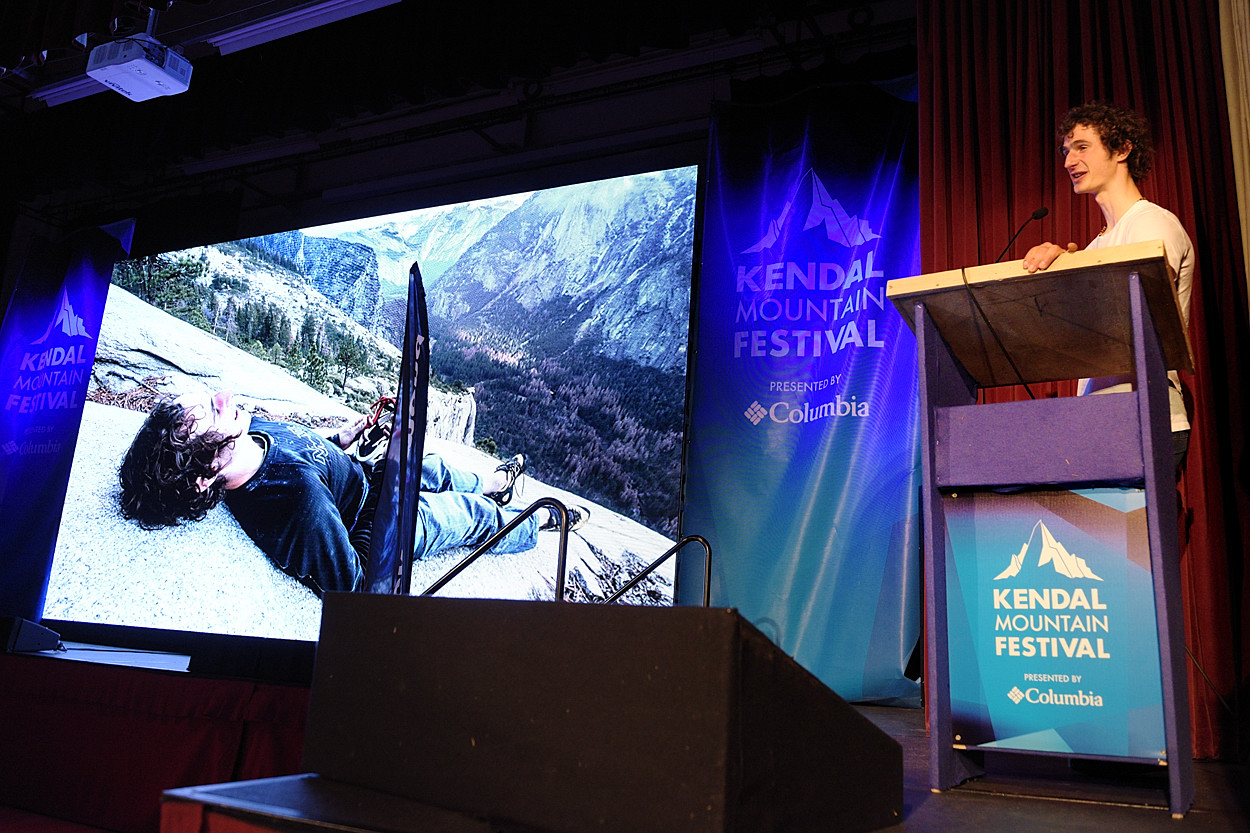 Adam Ondra keeping a packed audience at the Town Hall fully engaged with his account of the second ascent of The Dawn Wall. Photo Keith Sharples

With so much going on at the festival it’s impossible to see everything so picking festival highlights is very difficult. One of Friday’s big ticket items was undoubtedly the world-leading climber Adam Ondra. Fresh from his recent ascent of Silence – the world’s first acclaimed F9c – Adam captivated a packed Town Hall with his adventures repeating The Dawn Wall and doing the first ascent of Silence. Both are incredible performances done by an athlete at the top of his game. Opening the Q&A after Adam’s lecture Tommy Caldwell asked “why did you make it look so easy!” 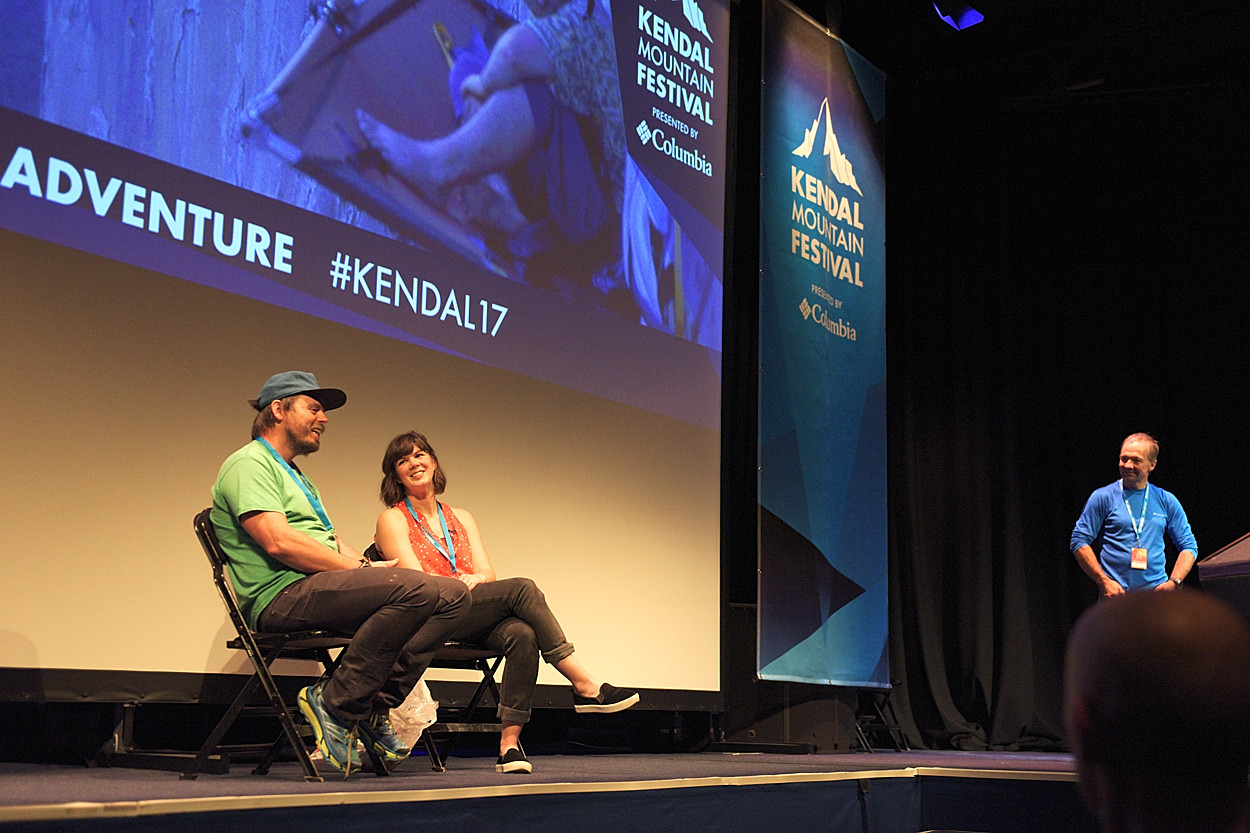 Andy Kirkpatrick and Jen Randall during the Q&A after the premiere of Psycho Vertical. Photo Keith Sharples

Also on Friday evening was the premier of Psycho Vertical – a.k.a. the Andy Kirkpatrick story as told by the award-winning film-maker Jen Randall. A haunting film, without a doubt, it’s a in-depth look into a highly complex character. 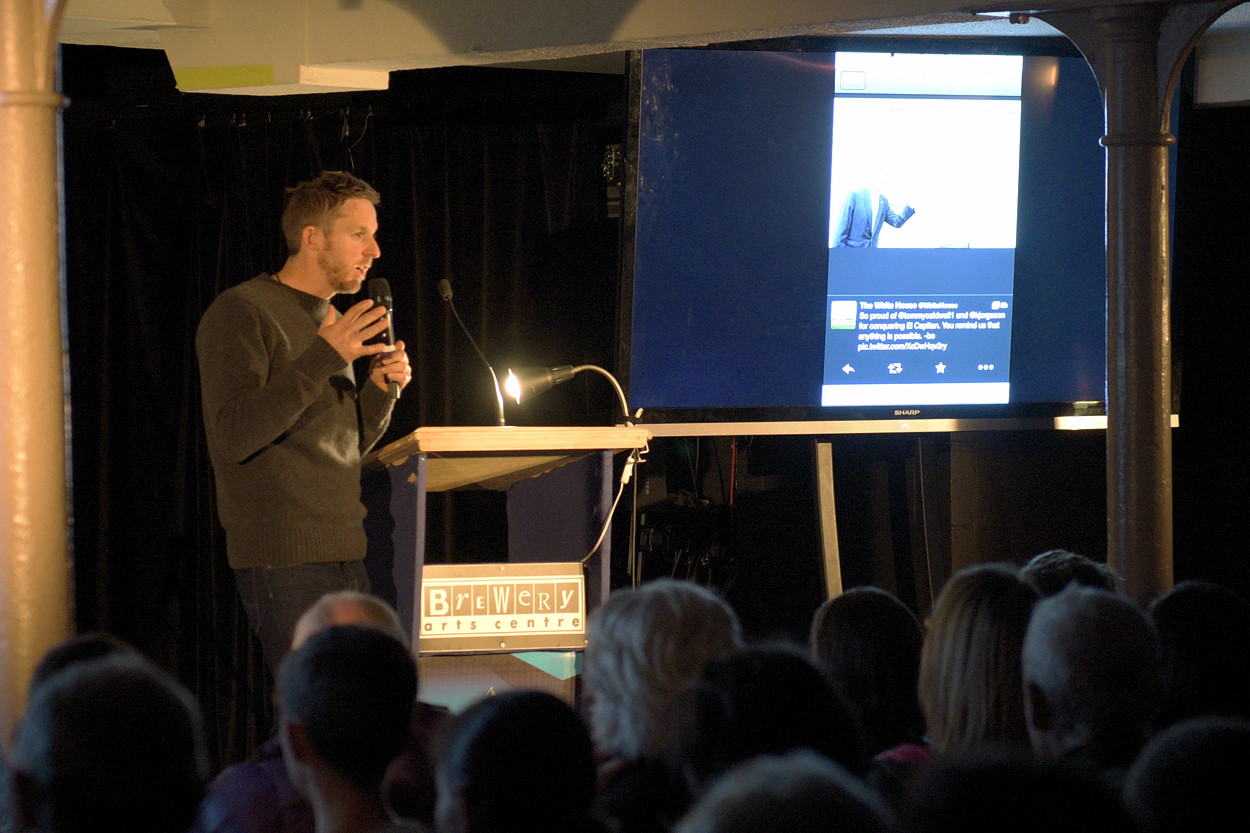 Amongst the plethora of films and talks on Saturday the nation’s stand-out mountaineer, Sir Chris Bonnington was back on stage to introduce his latest memoir, Ascent. Further fascinating stories from both mountaineering and climbing were given by Bernadette McDonald and then later on by Tommy Caldwell. However, going down in the world was award-winning film-maker, Paul Diffy – the premier of his latest film, The Orio Dream, the winner of the Peoples’ Choice. And for once Saturday was dry for the traditional 10k run! 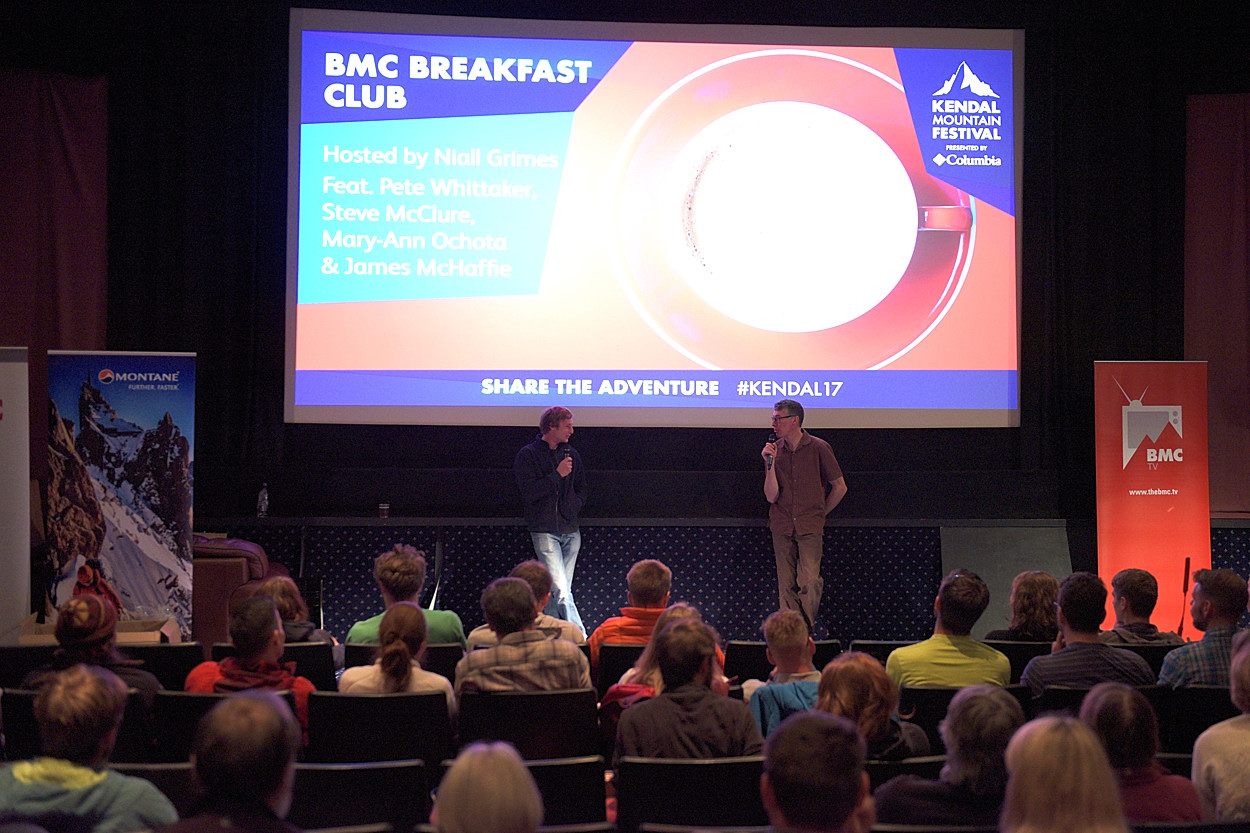 Sunday morning is BMC Breakfast Club – but not for the faint-hearted. Photo Keith Sharples

Those not seriously suffering from Saturday night’s party managed to get along to the BMC’s Breakfast Club on Sunday morning to hear tales from special guests including James McHaffie, Pete Whittaker and Steve McClure carefully served up by head chef, Niall Grimes.

Elsewhere Mammut-sponsored athlete, Dani Arnold was regaling an audience with accounts of his speed climbs on the Matterhorn and the Eiger; definitely not for the faint hearted! Watch out for a forthcoming interview with Dani in CLIMBER Magazine in the New Year.

The beating heart of KMF is, of course, the international film competition which this year attracted over 300 films across the range of categories. This year’s expert panel of judges comprised Channel 4 news anchor and reporter - Keme Nzerem, GB Bouldering team member Michaela Tracy, film director and activist David Holbrooke, James Woodroffe – executive Producer for North One Television and Emma Brennand – documentary filmmaker working at the BBC. A total of 93 films made it through the pre-selection process and were screened over the three day viewing programme.

The film awards and winner were:

Best Culture – Becoming Who I Was, Chang-yong Moon, Jin Jeon

The Basecamp run over the entire weekend with Liam Longsdale interviewing numerous presenters – not least Steve McClure and Sir Chris Bonington.  KMF also incorporates the annual Photography Competition. The winners were displayed in the Basecamp area for all to see. 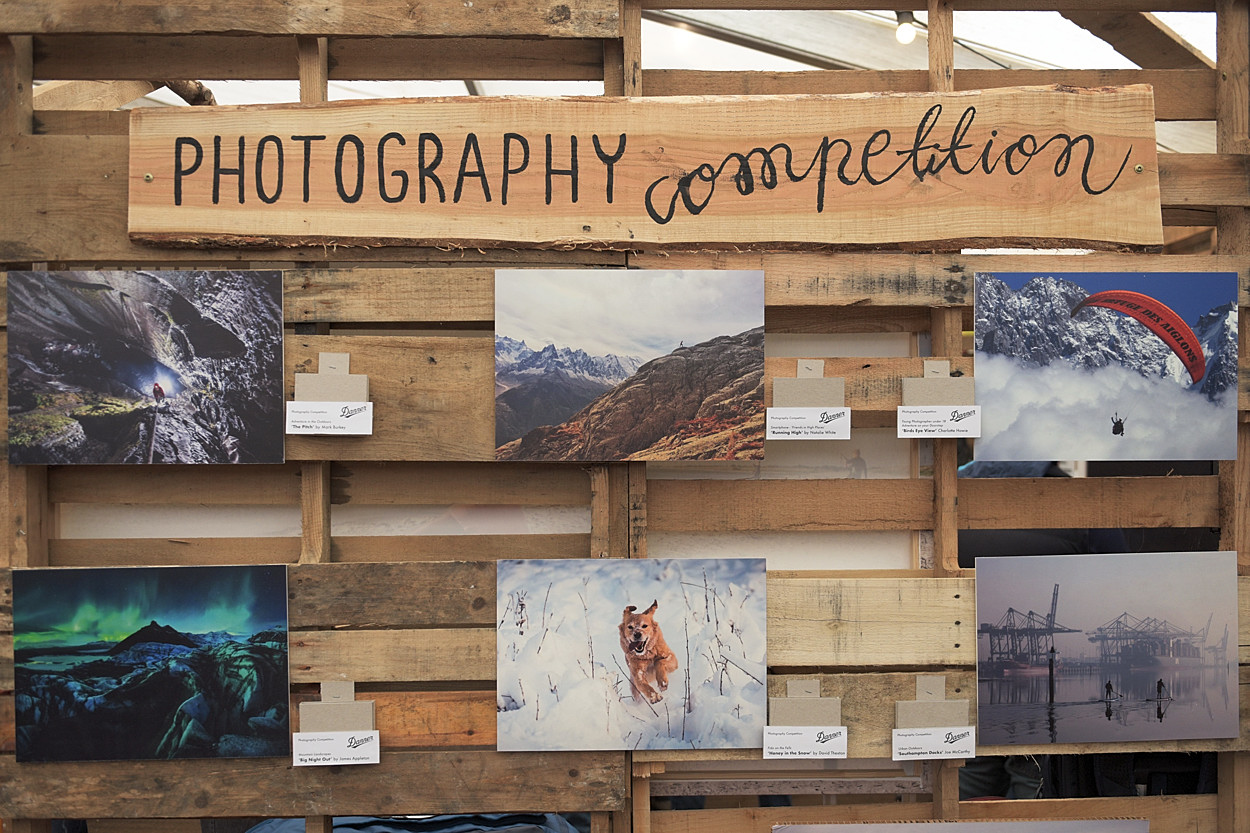 The wining photographs in the Basecamp. Photo Keith Sharples

Presented by Danner, this year’s judging panel was headed by US photographer Jim Herrington.

The photo awards and winners were:

6) Urban Outdoors was won by Joe McCarthy with Southampton Docks