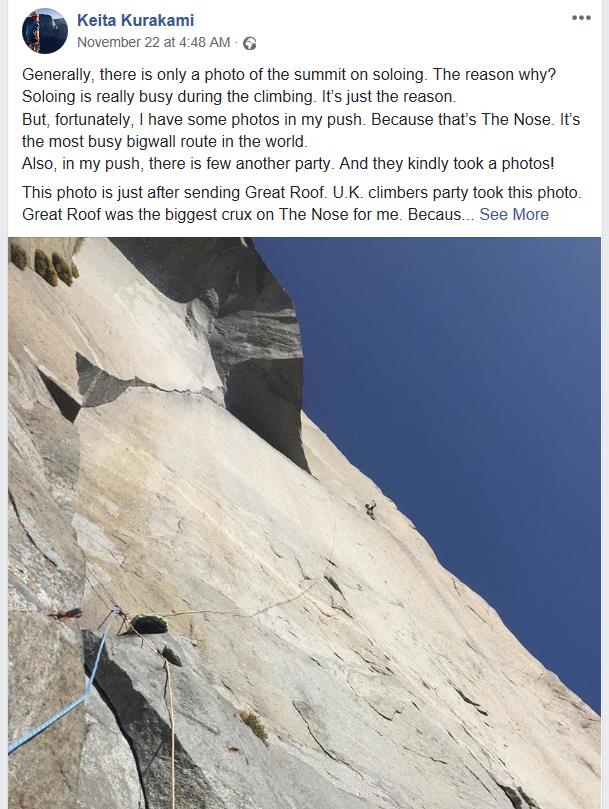 Keita Kurakami is developing quite a name for his hard ascents world-wide. Here in the UK, Kurakami notched up The Walk of Life (E9 6c) whilst back in Japan he did the first ascents of Senjitsu-no Ruri (5.14a R/X), Mt. Mizugaki and The Votive Light (5.13d/14a R), Ukawa. By all accounts Kurakami work on The Nose began three years ago when he worked the two crux pitches, the Great Roof and Changing Corners. In 2017 Kurakami returned to Yosemite and freed every pitch on The Nose over three days. However, as he returned to the valley floor at night his ascent was not a continuous push hence for his 2018 trip he did it all free in a continuous push doing it roped-solo just to add a degree of additional interest! It is believed that only three climbers have previous free climbed El Cap roped-solo, Stéphane Perron, Jorg Verhoeven and Pete Whittaker all of whom did Freerider (5.13a). Keita Kurakami has added his name to a list of world-class climbers to free The Nose; Lynne Hill, Tommy Caldwell, Beth Rodden and latterly Jorg Verhoeven. 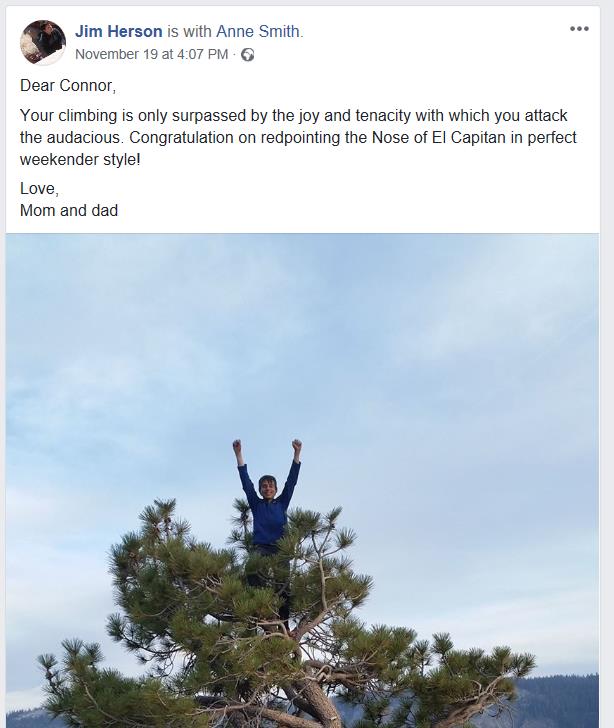 Jim Herson’s FB post announcing to the world that his 15year old son had just ticked off The Nose free.

If Valley pundits thought that Keita Kurakami’s ascent was it for 2018 then they must have been ecstatic when 15 year old Californian Connor Herson promptly did the sixth ascent of The Nose free with his dad, Jim over last weekend! Talking three days for his ascent Connor is now the youngest person by a considerable margin to free The Nose; Beth Rodden was 25 when she did it with Tommy Caldwell in 2005. Herson’s ascent might have been completed in just two days were it not for time lost on the Changing Corner’s pitch when Herson Senior had to clear the pitch from fixed ropes. Whilst Connor has spent many of his formative years climbing in the Valley with his parents he’s also found time to make headlines elsewhere with a second-go ascent of Southern Smoke (5.14c) in the Red River Gorge where he’s also repeated Lucifer (5.14c).

Finally, Nina Camprez has also been working The Nose free. Caprez has been climbing with a range of partners in including Lynne Hill and Hazel Findlay. Whilst it looked like The Nose might get three free ascents this year, Caprez posted in the last few days that her time in The Valley has come to an end and that she wasn’t able to complete The Nose free on this trip. Doubtless she’ll be back!