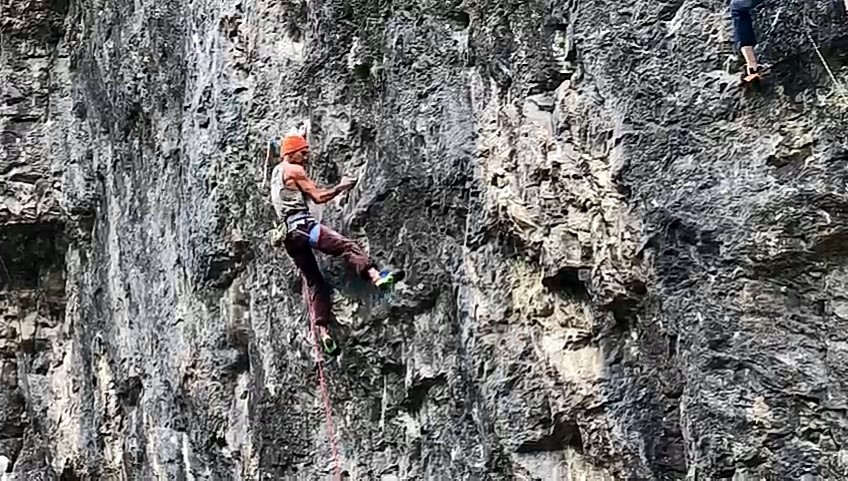 Originally climbed in 1995, Progress was Jerry Moffatt’s final new route; thereafter he concentrated on bouldering. Taking a stunning line left of centre of North Buttress, Kilnsey, the initial wall on Progress is the crucial section whilst the capping roof provides a typically spectacular and pumpy finish.

Since its original ascent nearly 25 years ago, Progress has lost holds making it harder hence the upgrade to F8c+. The fastest ascent to date, as well as one of most recent ascents, was done by Alex Megos in the spring of 2016. The on-form Megos dispatched Progress on his second attempt during the same trip that he did the second ascent of Northern Lights.

A number of climbers have been working Progress recently. However, taking full advantage of the unusually dry spring Jordan turned his attention to a dry North Buttress and got stuck-in to working Progress. He finally got the redpoint in last Tuesday having got very close the day before. CLIMBER have been in touch with Jordan for his thoughts…

Thanks, yes it only really sunk in the next day at work when I realised how exhausted I felt. I'd gotten a significant highpoint on Monday on my third redpoint of the day, and had decided to come back the next day to try again as I really wanted to finish the saga of my siege. I'd underestimated how hard I'd tried over those two days as I felt exhausted afterwards. I'm chuffed to have done it and given it everything as I now feel wiped out.

Progress has lost a few holds and is now harder than when Jerry did it back in 1995.Can you talk us through the route now please.

Straight away the hard climbing starts, I thought something like font 7C+ to 5th bolt where I could get a goodish shake out and then it's maybe an 8b route to the top?

It's my complete anti style, found it pretty sustained with quite stretched out moves that required perfect precision.

It’s probably had less than a dozen ascents since Jerry did it nearly 25years ago. Why do you think that is?

Well its hard, I know it's not a soft touch and it is a massive step up from True North, the benchmark 8c on North Buttress.

I wholeheartedly recommend this route for anyone operating at that level of difficulty as it's super climbing, solid at the grade and a good benchmark for 8c+.

You’ve been training since Xmas at Boulder UK; that’s obviously been going well – what the main things you’ve been doing?

Well I've embraced climbing on the woodies which I'm definitely not a natural on, it's forced me to climb front on and improve my ability to dig deep and use raw power. I didn't bother with any endurance training this winter as it had not helped me previous springs. But I have been continuing to climb outside throughout the winter, on trips abroad and also UK limestone bouldering. I think this is important for 'keeping my hand in' on rock.

It’s pretty unusual for North Buttress to be so dry so early. Do you have more projects planned for there this year?

It's just brilliant isn't it; I could not have timed my peak better, a dry crag and east winds! I'll be keen to put some effort into Northern Lights, I had a brief play in 2013 after Rainshadow and again on Tuesday after I did Progress. I think I enjoyed it more this time as Ben was belaying so I got all the beta. It's proper hard but I do like a challenge and I do love North Buttress. Then there’s a few routes left of Mandela I've not been on....