James Pearson has just redpointed his second F9a, Condé de Choc at Entraygues, Briancon – with a little help from a breeze and his son Arthur. 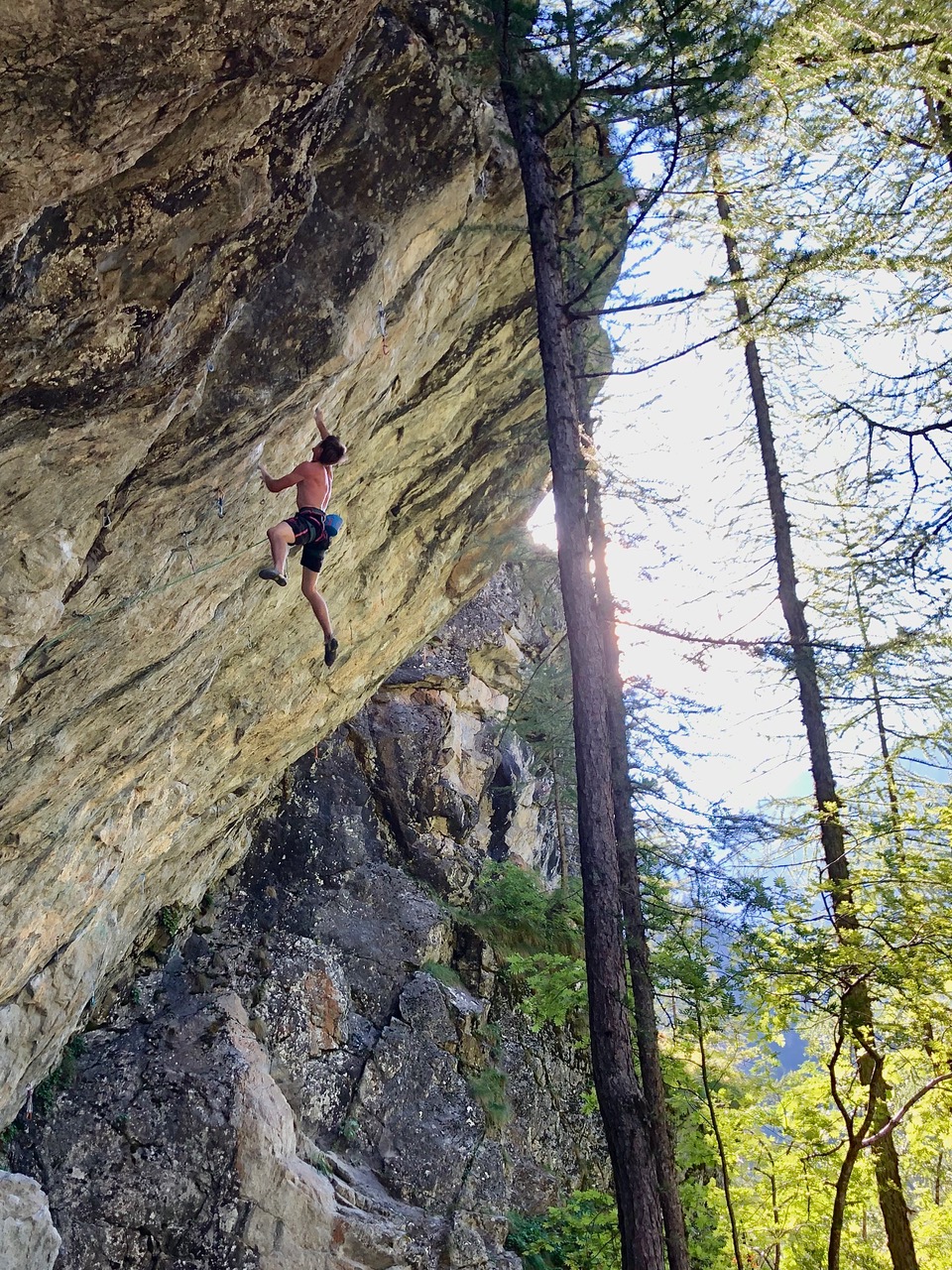 James, a Climber magazine columnist, climbed his first F9a, Escalamasters, eight years ago back in 2012. As they say, a lot of water has flowed under the bridge since then. Specifically, James and his wife Caroline Ciavaldini now have a third member in their team – little Arthur. That changes not only the climbing dynamics, including the mental game, as well as crag selection.

Entraygues in the Haut Val Durance south of Briancon is a perfect summer climbing venue for hard climbing – especially for those looking for easy access. Not only is it north-facing, hence all-day shade, but it’s situated a short distance across a river from a lovely Alpine meadow accessible by car. Although it’s only a small crag, Entraygues is very overhanging and offers a dozen or so savage testpieces – many of which have hard bouldery cruxes.

Condé de Choc is a route of two halves. Condé de Choc (F8c+) takes a hard direct line up the initial wall in the centre of the crag and then finishes up the overhanging right to left rising traverse line which splits the wall and is taken by La Cour des Grands (F7c). Deltaplane man Directe (F8c+), having started up Deltaplane man (F8b), provides a hard boulder finish above the traverse line of La Cour des Grands.  Condé de Choc, a link-up of two bouldery F8c+’s, is a popular testpiece having been repeated by several climbers including the likes of Adam Ondra and Stephano Ghisolfi.

James and Caro weren’t in the area long but James was keen to try Condé de Choc to see if it was something to come back for on a subsequent trip. Their trip didn’t start well however when James pulled his neck on a warm-up route forcing a few days rest!

James told Climber how the first section went when he was able to climb again:

‘The first boulder worked surprisingly well for me. I climbed the iconic jump move on my first try and figured out the first awkward moves to get into the jump. The upper boulder, however, was a different story, and despite its supposed easier difficulty, at the end of day one I still hadn’t managed to get to the chains! I decided to try just the first part of the route on day 2, known as Corde de Choc F8c+. I managed it after a couple of tries so I decided that the next day I’d get back on the upper section and try to figure that out, crossing my fingers I might have enough time to climb it before we had to leave.’

As is often the way on a short trip, tactics became critical. On his next visit James had the benefit of a “bon con” wind as he explains:

‘With the help of a breeze, I figured out a method that worked for me – a very cool, but very droppable dyno, and set to work trying to link the whole thing. I tried to make the most of the couple of days I had left, and was lucky that I could climb the first boulder almost every try. I got close on my first day of redpoints, but couldn’t hold the strange dyno, and gave myself a few little cuts in the process. Instead of trying one last time that day, I cut my losses and took a rest day, hoping that my skin would heal and conditions would be on my side for the last day of the trip.’

Having Arthur along at the crag further nuanced James’s climbing as he explains:

‘In the past, I think I’d have probably felt a lot of pressure in a similar situation, but one of the most unexpected bonuses of becoming a father is that climbing performance doesn’t really bother me anymore. Don’t get me wrong, I still love the idea of climbing hard routes and boulders, but the thought of 'failing' doesn't stress me like it once did. If I climb a route or not, Arthur is still going to be waiting for me at the bottom, and he doesn’t see me any differently. All he wants to do is to play with me in the river, or for me to help him scramble around the boulders or trees. Having a child really helps me put things into perspective, and realise that, at the end of the day, we only go climbing because it's good fun. In addition to the lack of stress, when you have a small child at the crag with you, you’re forced to be pretty damn efficient. When Arthur is up and about we’ve got to be following him every second, because turn your head for even a few moments and he’s soloed up to the first quickdraw! When he decided he’s ready for a snooze, then its go time for redpoints. You make the most of whatever time you have, when you have it – avoiding all the questions of “is it the right time”, “how do I feel”, and “maybe I should wait a little more”!’

‘My first try on the last day was good! I passed the bottom boulder without too much trouble, climbed well into the upper crux, and nearly stuck the strange dyno, sadly only catching the edge with two fingers. I played with Arthur in the river, helped him build some little cairns, and then just as I was thinking about how long to wait before my next try, he grabbed his teddy and dummy and pointed at his bed. A few years ago I would have definitely been waiting and worrying at this point, but now I’m tying on, happy to have a little time for myself. I climb the bottom boulder, but it’s a battle on each move, and get to the rest feeling noticeably more tired than the try before. Arthur hasn’t quite gone to sleep and he’s starting to wriggle around, I can’t hang around here forever! The few 'easy' moves after the rest feel harder than normal, but that doesn’t matter. I try hard, set up for the dyno, try really hard and WOW! I’m still on the rock! The last moves pass perfectly, and I clip the chain on my 2nd 9a, eight years after my first! I lower off, Arthur is already in Caro’s arms. We give him a snack, pack up, and start driving home.’