James Pearson has been in touch with Climber to say he’s climbed his project at Sunset Rock above Chattanooga Tennessee in the USA to give Power Ranger (5.14 R).

It takes a clean sandstone face starting with bold but easier lower wall to a rest before starting the difficulties of the headwall above. Intense unforgiving moves and powerful reaches lead into an intricate crux, followed by a run-out power endurance sequence to the top. 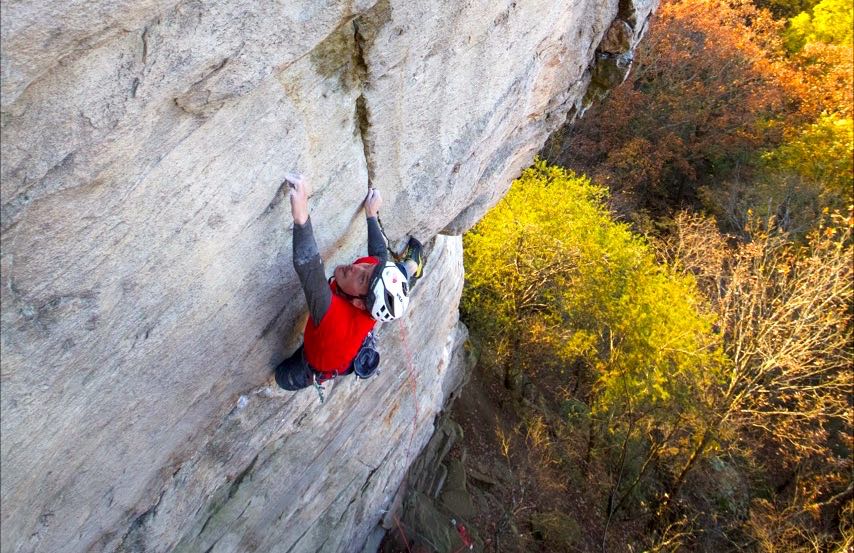 He had this to say about the process leading up to climbing the route:

“I’ve been on a quest to find my 'ultimate’ trad route for almost as long as I can remember. From the Alpine granite of central Europe, to the endless quartzite of South Africa’s Cederberg Mountains, little known Annot in the south of France, and currently the impeccable sandstone of the south eastern USA.

In all honesty this adventure began a long time before on my childhood cliffs of the Peak District, as every day out when I was 20 I kept my eyes open for my next extreme project, a little piece of unclimbed grit… Was I running after grades? Did I dream of ‘grandeur’? Maybe a little bit, but mostly, I wanted challenge.

I didn’t know it at the time, but I was a 'one trick pony’, pretty good on the short and balancy gritstone, but nearly not a qualified climber on other types of rocks. It took me a while to understand my flaws, and I took a break on my quest after I realized my climbing style at the time was so one dimensional.

Between 2009 and 2012 I spent most of my time sport climbing – working on my most obvious weakness – and saw huge gains in my trad as a direct result. Suddenly I could look at a steep trad route and feel excited, instead of afraid. I knew I would have the time to search for gear placements without every second being a count down to disaster. Yet as I began to climb more varied routes, at different crags all around the world, I realized you can never be great at everything. We Brits say 'Jack of all trades, master of none!’ We all have our natural strengths and weaknesses, and whilst it is important to balance them out, you’ll never see better results than if you project a route in 'your’ style. I was, I am at my best on balancy, bold, grit of sandstone, because this is where I started, how my body grew up. I am good at it because I love it, and I love it because I am good at it.

I had worked on my weaknesses, and even if I would never say I became an endurance master, I could play on varied styles. And soon, maybe even before this levelling was completed, I could feel the tickling of my obsession return. It has only been a few years that I can put words on what I am searching for, but I know it has always been there, every single day of my climbing life. I crave for my dream route, I run after the perfect piece of rock. Beautiful, pure, uncompromising and hard, the very hardest that I could ever climb. It is out there, I just have to find it.

It’s been a tough, sometimes frustrating process, but along the way I’ve been lucky enough to find some gems, and climb some really awesome new trad routes. Every new project starts with the question: is this the one? Have I found it? I first get overwhelmed, I worry that I won’t be able to do it, then I play, and as I get closer and closer to success, my heart sinks a little as I realise it isn’t my dream route yet. Success is bitter sweet.” 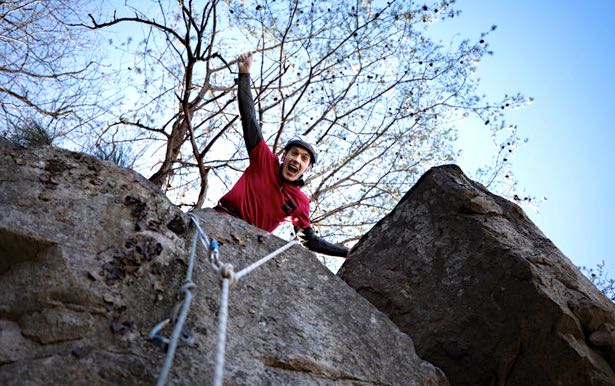 James continues and talks about the route itself:

“I write all this with that taste in my mouth, as I just completed my latest project. Power Ranger (5.14 R) climbs an incredible clean face at Sunset Rock above Chattanooga Tennessee. After a bold but easier lower wall, you make the most of a great rest before starting the difficulties of the headwall above. From this point on, the moves become intense and unforgiving, with long powerful reaches leading into an intricate and delicate crux, and onwards to a run-out power endurance sequence to the top. It’s a beautiful flowing sequence up almost perfect sandstone, and for the last year since I put my hands on it, I have been obsessed with returning to this line.

Finishing this route might seem like the end of the adventure, but my memories of this time will live on. It was all so worth it, because this is all that climbing is about. I could now continue and focus on the grade, go big and tell you that it is my hardest route ever, but the truth is, I don’t know how hard it is. It’s somewhere close to my latest ticks for sure, yet instead of the 1000th story of 'hard ascent of the year’, can’t we focus on something else?”

He explains why he liked the line so much:

“This route is beautiful – a single line of holds up an otherwise blank wall. No way around, no way to cheat, you get only what nature has given. The moves are powerful, yet delicate, with an obvious crux but also the chance to fall on any move. The gear is good, the run-out quite big, and provided you fall in a controlled way you should be ok, yet the climbing is awkward, the rope runs behind your legs, and falling off the upper moves would send you exactly in the direction you don’t want to be. I never fell off the last few moves so I can’t say for sure. Perhaps it is safe, perhaps not… only time will tell.

I wanted to make a film about this route as I feel like it deserves to be shown, not for my ascent, but for just how cool it genuinely is. I had the chance to be close to a creative video maker, Pietro Porro, and to have the unconditional support of La Sportiva to unleash our darkest thoughts… Influenced by the insta-consumption of today’s modern world, the film looks at our relationship with climbing and how, if at all it has changed over the years. As always these things should be taken with a pinch of salt. Pietro’s in the editing suite as we speak, but he’s an artist and these things take time. It will be ready when it is ready, so in the meantime, (this bit’s best said in a deep, somewhat over the top American accent) get ready for Beyond the Mostest, coming soon…”