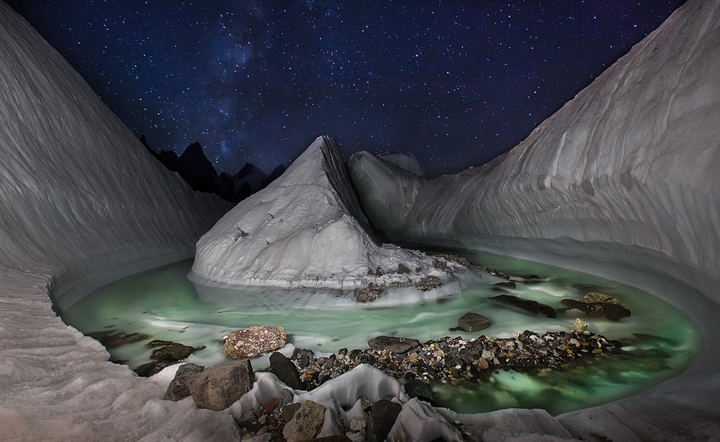 David Kaszlikowski won the 2014 IMS with his photograph of a glacier river taken on the famous Baltoro-glacier close to the famous Concordia Square. This square is known as the heart of the Karakorum.is one of the most famous nature and adventure photographers worldwide. David Kaszlikowski’s pictures have appeared on the covers numerous magazines including the Polish edition of National Geographic, Desnivel, Climbing and Vertical.

The IMS photo competition, this year in its fifth year, is likely to be massive if the 2014 competition is anything to go by given that c. 26,00 photographers from c. 100 countries submitted their best shots. This year’s theme is ‘Mountain Faces’ which aims to get pictures that represent individual perspectives of the mountain with all its facets as well as photos of those who have conquered it or of its inhabitants.

Mountain.Faces: Mountain massives, steep rock faces and unique rock formations reveal impressive stories about themselves, about climbers that scale rock faces and about mountaineers who expose themselves to extreme hazards. In the mountains one sees the faces of people who live among rocks and fight against natural forces. One may also come across some animals that have adapted perfectly to almost unreal circumstances in the mountains. It's not only about the faces of climbers, mountaineers or mountain people which depict the  innate difficulties of the mountain and the hardships one must face in the quest to conquer a peak, but also about the tears of joy and the pain-distorted mouth corners once that goal has been achieved.

Show us with your photo the multitude of mountain faces, regardless of whether they are shaped by rock, flesh and blood or animal hides. In the end, what counts is the uniqueness of the moment immortalized for eternity in the photo.

Thanks to cooperation with the world-wide drone producer DJI, a new category has opened up, dedicated entirely to drone photography. Photos that have been taken with the aid of a drone can be submitted. The “DJI Aerial Photo Award” prize to be awarded will be one of their latest generation drones.

In addition, there also another very special award is awaiting some photographers. Their photo could become part of the photo book “Atem der Berge”, which will be presented by Kiku. International Mountain Summit, in cooperation with the renowned editor Bruckmann Verlag, at the Frankfurt Book Fair in October.

To see our full report for last year's competition click through here.

Click through here to find further Information regarding the competition.