News from Antarctica is that Leo Houlding, Jean Burgun and Mark Sedon have summited the Spectre in the Gothic Mountains in Antarctica.

Houlding, Burgun and Sedon on the Spectre summit.

Although the original intention had been to climb the Spectre via a new route on the south face the team switched their attention to the ‘route of least resistance’ given the variable weather conditions and their shortage of time to complete the climbing element of the expedition.

After a partial circumnavigation of the Spectre to check descent and ascent options we formulated a plan. Basically, everything looks pretty hard, long and seriously committing. After much consideration, we decided the wisest course of action was for all three of us to attempt to summit the Spectre by the route of least resistance.

That would be to repeat the Mugs and Edmund Stump route on the north side of the Spectre. Though the north side is still a very formidable peak, it lacks the aesthetic perfection of the south side. It is a complex maze of snow ramps, chimneys and steep buttress steps that do not form an obvious line to the summit.

Yesterday morning (07/12/17), we left camp in sunny, calm conditions at 8:00am with light loads and fairly minimal kit. We nipped over the col we had inspected previously and were at the foot of the north side of the Spectre by 10:00am. A steep snow couloir offers easy access to the col that forms the left saddle of the Spectre when viewed from the spectacular south side. 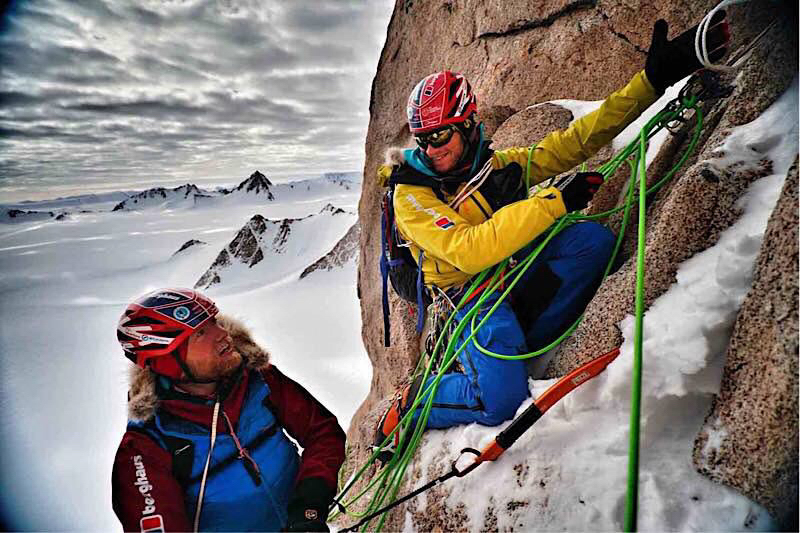 Jean and Leo climbing towards the summit.

In the sun, without wind and on the move the temperature was balmy. But then we hit about 50m of shade in the couloir, and as Mark described it, “panic cold” - 20C colder than in the sun, fingers froze and muscles tightened within seconds. Thankfully, we soon skipped back into the sun to survey the route and wait for its warming rays to rotate around on to the face we were about to climb.

Jean and I played the customary paper, scissors, stone hand game to decide who would lead the first block. He won. We entered the maze without too much anxiety as the weather was good and we figured even though we couldn’t see an obvious line, there were so many features and options that surely we would find an easy way?

That was our first mistake. We forgot - nothing is easy out here! Very quickly, route finding became an issue. Jean was faced with four ladders to climb leading in four very different directions, three of which led to snakes to slide back down. In situations like this, the best course of action is for the leader to try to have a decent look at every option before committing to one, as once committed if it turns out to be a dead end it is very time consuming to descend and try another. It is impractical to traverse 20m left, 20m right, then go up a bit, to try to see further. Often there is no clear correct choice.

You must simply try your hardest to find a way that you can climb without too much risk, and this we did for many hours. Jean led a particularly tough, scary pitch, quite low down. We convinced ourselves that this was not the way Mugs and Ed would have gone, but for a few rope lengths above, the terrain looked okay, so we continued.

We stumbled across an old piton and sling abseil station from the Stumps. We zigged and zagged our way across the face, covering a fair amount of distance, over a great deal of time, without gaining that much altitude. Gradually the cloud built up and the light flattened, and with it the intimidation increased and the mood subdued.

Never did we discuss retreat, but I know we were all thinking: “If the wind picks up, this is a survival situation and we’re out of here.”

With the constant dead-ends and slow progress, we were being drawn into a very committing game of grown-up snakes and ladders. All the while with the cloud thickening, and not knowing whether it was the front of a storm or just a band of moist air in the atmosphere.

It took hours and hours to progress towards false summit, before another false summit. When we thought we must be nearing the summit we hit a 25m cliff band that we had traversed two full rope lengths of snow ramps to reach. Proper climbing, but short enough that I was sure I could get up it quickly. But it was wide, loose, and hard. By the time we got to the top of the rock band, which was still some hours from the summit, we were all starting to feel pretty strung out.

The level of commitment of being high on a steep, complex face out here at the end of the Earth is impossible to overstate. Away from the sanctuary of our camp, we are so very isolated, and so very exposed. If Antarctica snarls, it is very quickly a survival situation. It was with more anxiety than pleasure that we pushed on to the summit, ready to turn and run at the first whiff of wind.

Antarctica smiled upon us, and eventually we could go no higher – the summit.

It was close to midnight already, and in truth, it wasn’t a very joyous summit experience as we were all so anxious for the long complex decent. Seeing our camp so tiny and so far below didn’t help matters.

We began the return journey. Jean led the descent fastidiously and efficiently and to our great relief the weather did not deteriorate any more. Our fears were for naught and we were back in the approach couloir within three hours. We breathed a deep sigh of relief. Stumbling back into camp at 4:20am was a wonderful feeling. Security, safety, survival - It really feels like home. So quickly our anxieties are forgotten as we revel in our triumph and pass off all those fears as “type two” fun!

And almost immediately the wind began to blow and as we laid down to sleep after a 24-hour session it gusted over 30 knots. The gods of these Gothic Mountains had been kind to us.

The team will soon have to begin the 1,700 km journey home man hauling and kite skiing. Before they leave the area however they are looking  to attempt a secondary objective – a skyline traverse of the Organ Pipe Peaks. Watch this space for updates when they come in.

Click through here for our earlier report on the whole expedition including the kit skiing plans or here to go to the expedition website for updates.