The first major comp of the season, the European Bouldering Championship in Insbruck, saw a German double with Jans Hojer and Juliane Wurm taking the male and female titles respectively.

With so many capable climbers in the comp it was always going to be a super-tough competition. Clearly the setters were going to have to invent some tasty blocs to separete the field and judging by Dave Barren’s comments “Brutal set of boulders didn't feel I could get into a flow”, it was clear that the semis were nails. Jan Hojer too struggled in the semis finishing in fourth place and were it not for a characteristic power-house flash of one the blocs he might have had an early bath and missed the finals altogether! 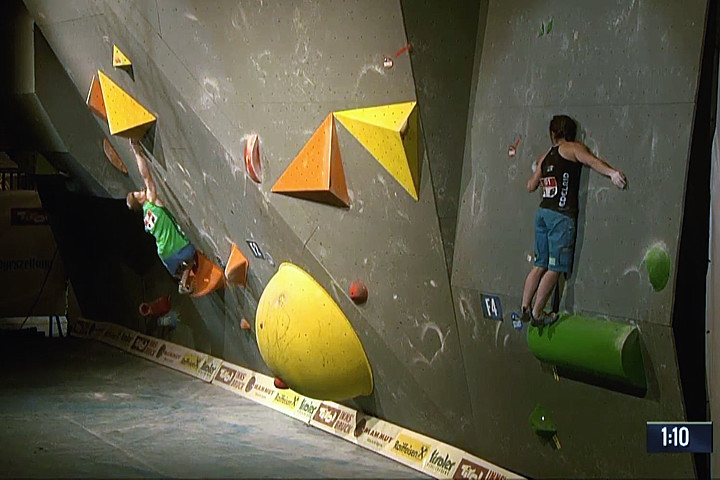 Unusually the competition was held over three rather than two days. The women’s final was really a head-to-head between the young pretender, Juliane Wurm and the experienced multi-comp winner, Anna Stohr. In the end both Wurm and Stohr had the same number of bonus holds (four) and tops (three) but Wurm scooped hers in half the attempts to edge Stohr out of the frame and become the clear winner.  Austrian, Katharina Saurwein, placed third with three bonus holds and a single top. The forth bloc for the women was a heart-breaker slab which involved tip-toeing along a half-log volume to get to a shockingly small hand hold and a super-sloping foot hold from which they clearly had to jump to two opposition gastons high above. None of the women cracked that particular bloc – but only Wurm, who had already won the comp by the time she came to F4 – was smiling as she tried in vain to hit the two opposition gastons. 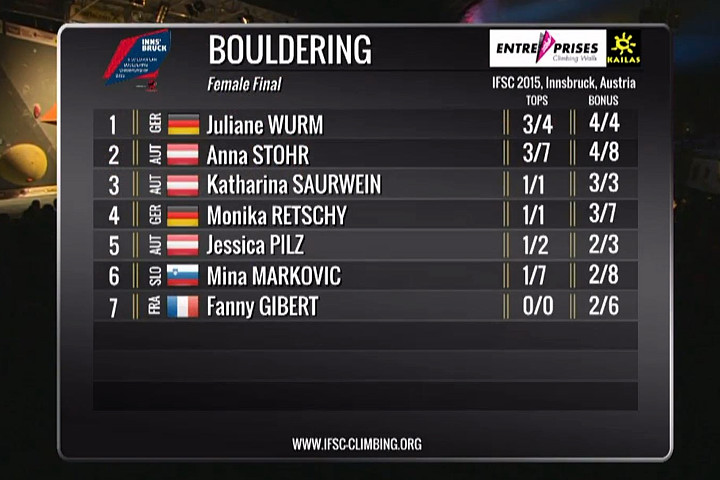 The women’s final placings show just how far the top two women were ahead of the rest of the field. Screen shot from live stream IFSC

The men’s title race promised much but in the end it too became something of a two-man head-to-head between Adam Ondra and Jan Hojer. The refreshed Hojer was very much back to his normal self after his near wobble in the semi-finals the day before. Joining him in the virtual head-to-head for the top slot was the irrepressible Adam Ondra. Who would bet against Ondra from doing the business? Sadly though, Ondra was not having the best of days although not as bad as Jakob Schubert who having finished the semis in top slot had to watch his placing drop in near free-fall as the final round progressed. The final male bloc was virtually a volume-only bloc involving a double dyno off two (low) volumes to two high pyramid volumes. Hojer read it well and pretty quickly got the measure of the double-handed, double-gaston moves quickly and went on to top-out quickly. Ondra also topped-out in the end but Hojer had already crossed the finishing line having posted two tops (from three tries) and four bonuses (from five tries) to Ondra’s two tops (from six tries) and three bonuses (from ten tries). Italia, Stefan Scarperi picked up third place with a single top (from five tries) and two bonus holds (from six tries). 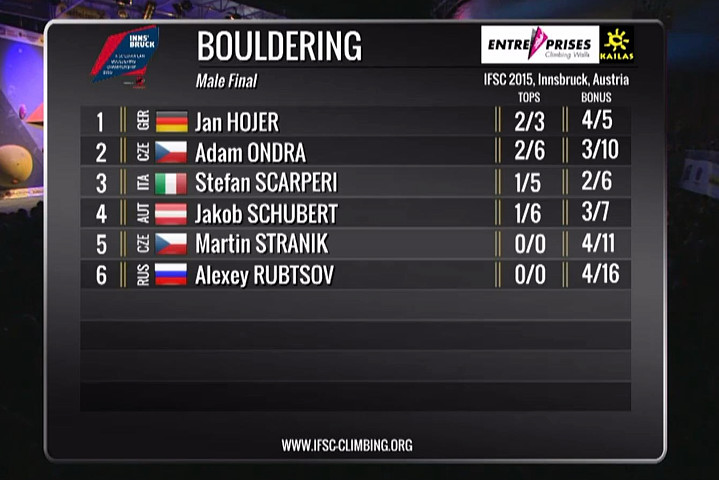 Bristish interest was somewhat dented when Shauna Coxsey withdrew from the comp just days before qualification on account of an injury sustained during training. Swoping her chalk-bag for a mic, Shauna joined the comentary team; her insightful comments proving she could well have a future behind the mic long after she’s finished competing! Dave Barrens, one of the oldest competitors on the circuit, was the highest placed Brit finishing in 18th place after the semi’s. Nathan Phillips, Matthew Cousins and Orrin Coley placed 47th, 55th and 57th respectively. Leah Crane, the only female from Team GB placed a respectable 20th after the semi’s.