Hamish Potokar talks about The Voyager

On Sunday Jan 4th, Hamish Potokar made what is thought to be the tenth ascent of The Voyager (Font 8b), Ben Moon’s Burbage North testpiece.

Hamish, a member of the GB Junior Bouldering Team, climbed The Voyager on just his second session on a gloriously sunny, yet cold crsip day. Hamish had previously worked The Voyager last week when much of the Peak was in the grip of a wintery blast. 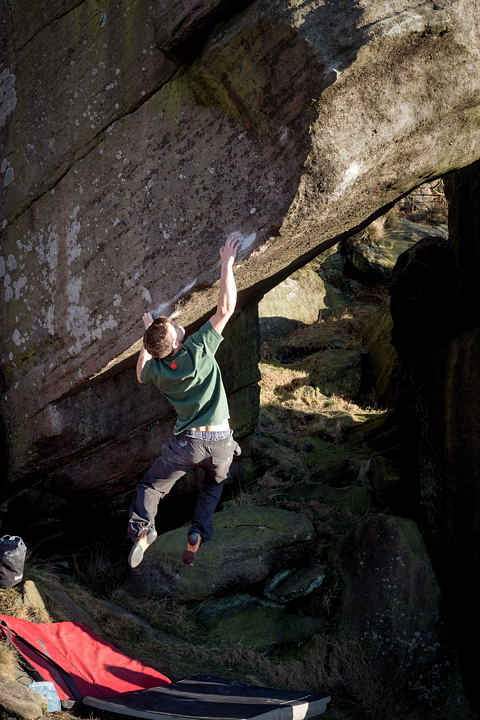 We’ve been in touch with Hamish for the low-down…

The Voyager in 2 sessions - some result! Has it sunk in yet?

I think it just about has now, that's not to say it was completely unexpected though. After having a play on it last week I surprised myself with how well I got on with it, managing all the moves apart from the top few. Driving back to Bristol my mind was racing; physically it felt like it might be possible, but mentally it felt totally out of reach. It’s one of those lines you look at and think, 'if only I was good enough to climb that', and so the concept of actually doing it was both exiting and daunting. Within the week James and I had returned, this time with the addition of a stepladder! After doing the top section, I pulled on and did it second go. I was so shocked getting to the last move I nearly blew it.

What was your previous hardest problem and what have you been doing to step-up to The Voyager?

I climbed a couple of 8A+'s in Magic Wood back in the summer, but everyone knows the stuff there can be a little on the soft side. It’s nice to get a proper grit 8B under my belt, especially as it’s such a classic. Being honest though this doesn't feel like the hardest thing I’ve ever done, there's stuff in Font for example which have taken way more work than this. As with everything I guess it comes down to how much the climb suits your strengths and I think this one suited me pretty well! The funny thing is that over the past couple of months I haven't been training at all, just taking it easy and trying to give my body a bit of a break. There’s definitely something to be said for having some time off from the hard work and relaxing for a bit, I definitely feel better for it!

What do you have your eyes on next? Maybe the sit start to The Voyager?

The Ace is definitely next on the cards (no pun intended), I’ve spent so much time on it over the past year so it would be good to get that finished. May check out Voyager sit as well, though I suspect that may be more of a long term ordeal! The problem with just getting on hard stuff, especially on gritstone, is that it’s very easily to trash yourself in a few attempts. It’s nice to get some actual climbing done when you've driven three hours from Bristol, rather than returning with a flapper and just a couple of punts at an 8B under your belt! Even so it’s nice to get out whatever the case. I'm also looking forward to competing in Europe in the summer, this year being my final year as a junior, so that's the big one I’m going to be training for! 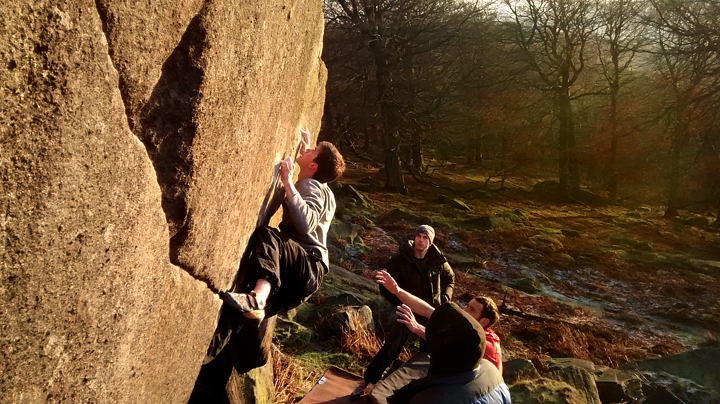 James Squire and Nathan Phillips were also trying The Voyager on Sunday with Hamish and getting close so watch this space as there may be more repeats soon. Finally, Hamish went over to The Plantation for another session on The Ace but, as they say, no cigar!

Click through here to watch a short film of Hamish on The Voyager by Archie Cameron-Blackie.

Thanks Archie and Alex for the photos of Hamish. Click through here to go to Archie Cameron-Blackie's website to see more of Hamish in action on the grit.

Hamish is sponsored by Scarpa, Banana Finger and The Climbing Academy.