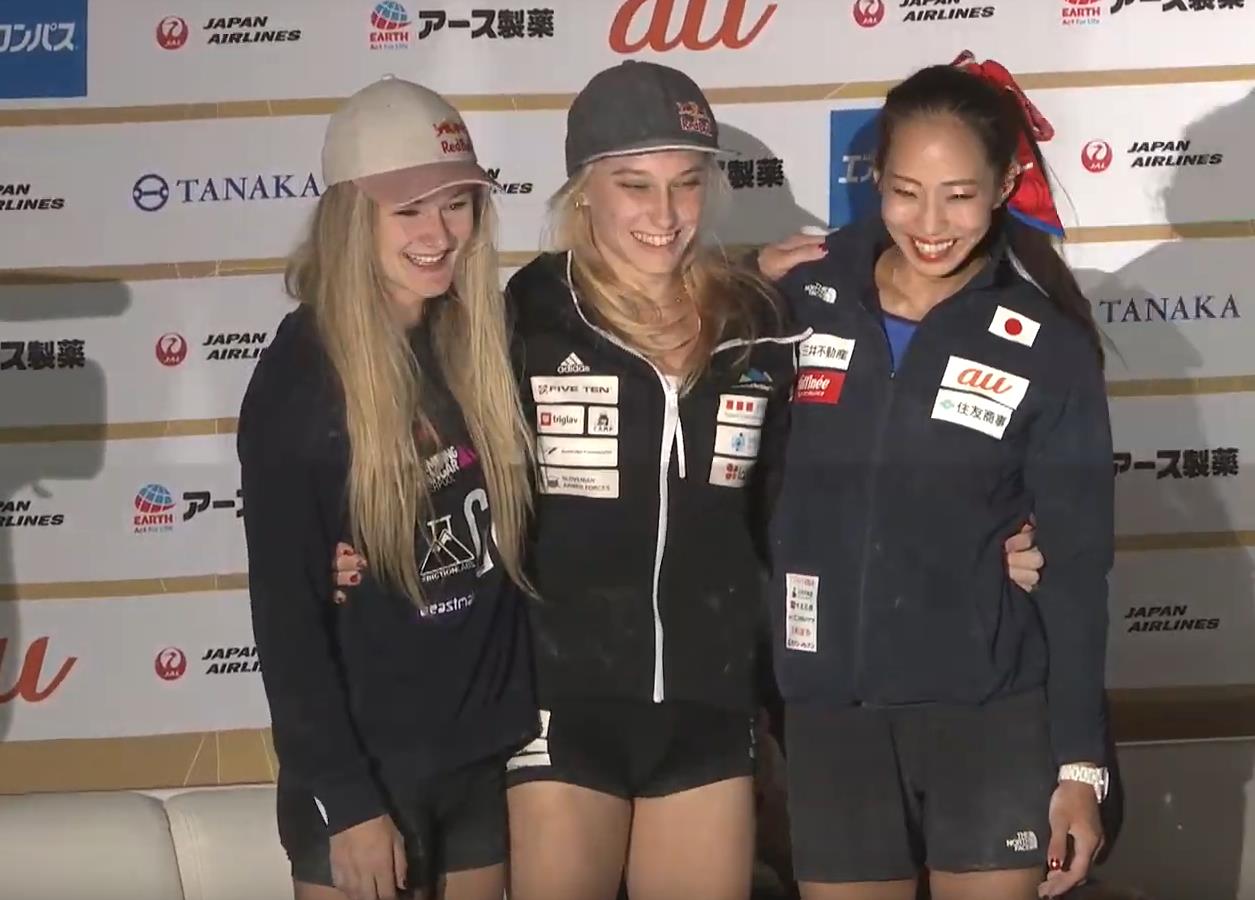 So let’s start this round up of the Women’s Combined World Championships and the race for Olympic selection by looking at the position at the end of the three individual World Championships  and the rankings of the athletes in the respective disciplines. Taking each of the athletes in turn, their overall ranking point scores were calculated by multiplying each of their relative ranking positions in each of the three individual events. Athletes not competing in the Combined were eliminated from the rankings prior to this calculation. Janja Garnbret, widely considered as one of the hot favourite for the Women’s event at the Tokyo Games, finished the three individual World Championships in overall top position with just 15 ranking points - the lowest ranking points of any athlete having won the lead and bouldering events and finished in 15th (once the none Combined athletes were eliminated) in the speed (ie 1x1x15 = 15). Medal contenders, Akiyo Noguchi and Shauna Cosxey, finished in second and third behind Janja Garnbret with 260 and 1435.50 points respectively.

The following IFSC table shows ranking points for all 20 of the highest ranking athletes who qualified to go forward and compete in the Combined World Championships. 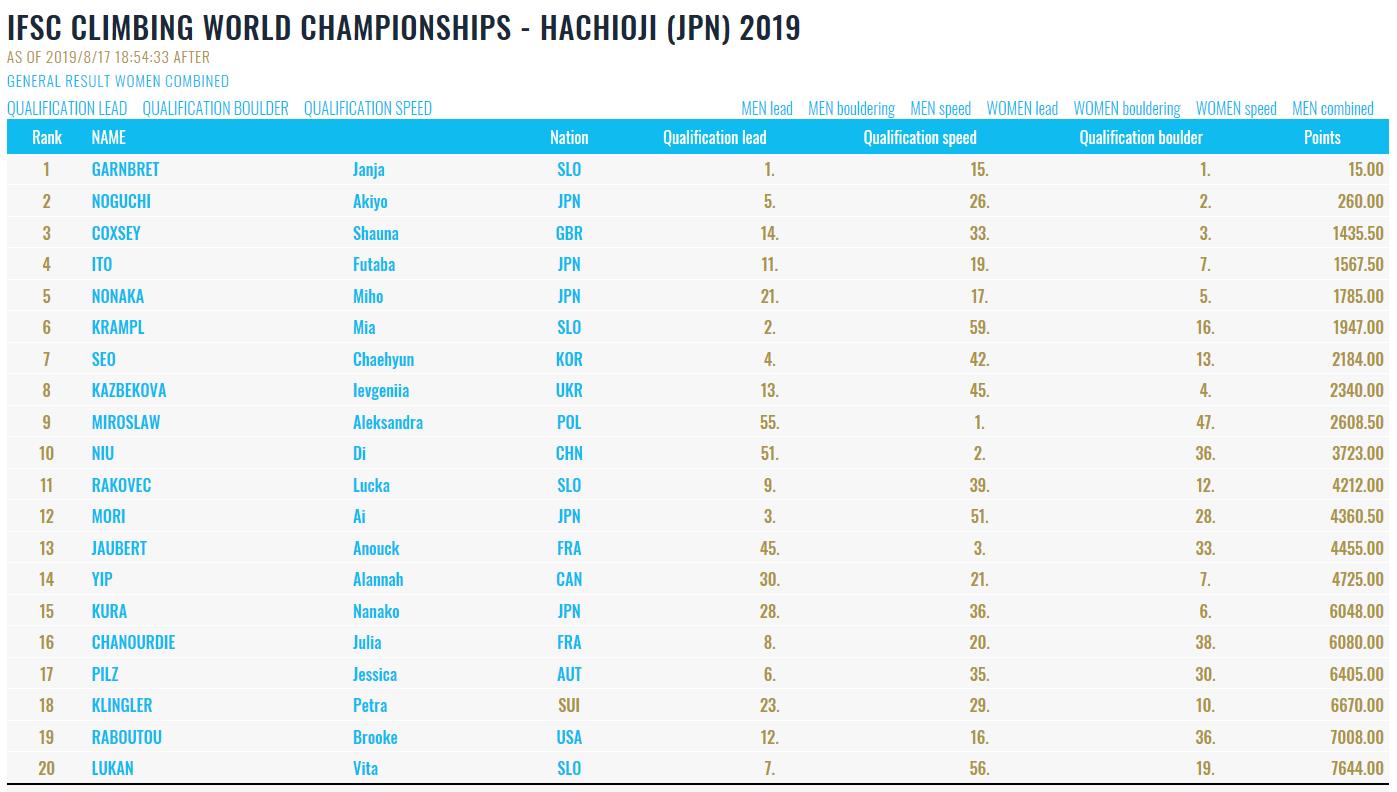 The top 20 athletes qualified for the Combined World Championships

Sunday saw the Women’s qualification day for the Combined World Championship with all 20 athletes competing in a one day event covering speed, bouldering and lead disciplines.

The bouldering element was next to the contested and Shaua Coxsey absolutely bossed the event flashing all four blocs to take a very well deserved first place in the bouldering. Coxsey’s strong performance piled the pressure on Janja Garnbret who – despite topping all four boulders - didn’t manage to flash them as Shauna had done so she finished the bouldering in 2nd. Akiyo Noguchi finished in 3rd.

Finally, the 20 athletes had to face the lead route; a 42move endurance monster cooked up by the setters. Despite looking somewhat jaded, Ai Mori alone managed to find a top and whilst both Akiyo Noguchi and Shauna Coxsey punched out quality performances they finished 2nd and 3rd respectively. Uncharacteristically, Janja Garnbret finished down in 8th place.

Once the resulted had been totted up, and having battled the three events in a day, Shauna Coxsey emerged from the demanding Women’s Combined qualification round in first place ahead of Akiyo Noguchi in 2nd and Janja Garnbret in 3rd. As well as Coxsey, Noguchi and Garnbret, Petra Klingler, Ai Mori, Futabu Ito, Aleksandra Miroslaw and finally Miho Nonaka also qualified for the Combined final.

Finally, the eagerly awaited Women’s Combined Final kicked off earlier today, the penultimate day of the Hachioji event, with the Speed element. Although Aleksandra Miroslaw was the clear favourite to win the speed element as the recently crowned 2019 Speed World Champion given the high risk nature of speed competitions it wasn’t a certainty that she’d win a fact emphasised when she slipped in her first run in the speed today albeit before going on to win that leg in a ‘slow’ time. The other ‘first run’ winners were Petra Klingler, Shauna Coxsey and Miho Nonaka. These four athletes then contested the top four positions whilst Janja Garnbret, Ai Mori, Futabo Ito, Petra Klingler and Akiyo Nogguchi contested 5th through to 8th. During her 2nd run against Miho Nonako Shauna Cosxey put in a wicked semi-final run recording not only a PB time but a new GB Women’s speed record time of 9.141secs as well. That set Coxsey up in the speed final to climb against Miroslaw, and although that was an encounter which Miroslaw won with a time of 7.75secs Coxsey took a well-desrved 2nd place finish as well as demonstrating her developing and a solid speed game. Petra Klingler finished in 3rd and Miho Nonaka in 4th. 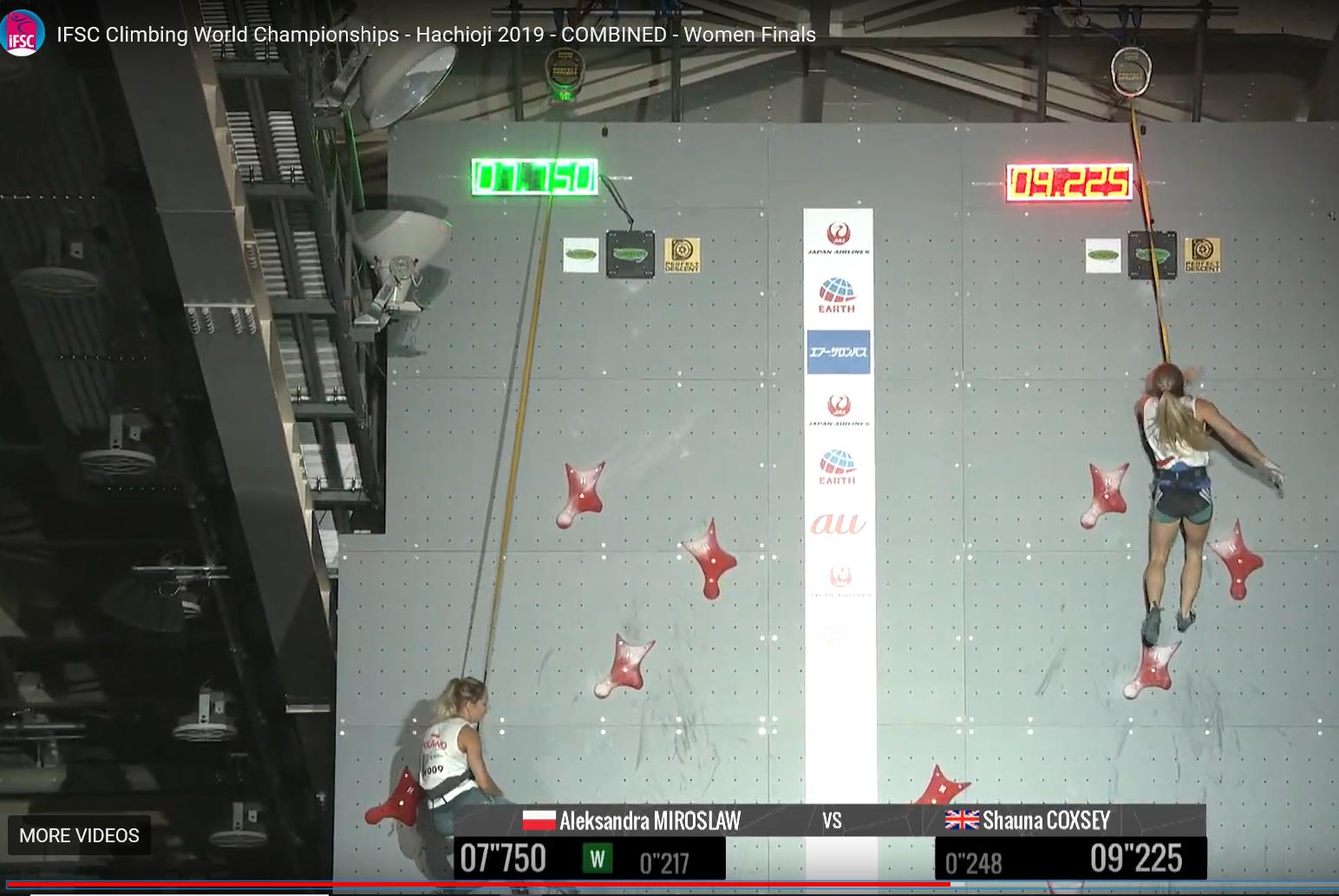 With about 30 minutes rest after the speed element the eight climbers were soon head-to-head again on the three boulders in the bouldering element. Akiyo Noguchi came out all guns blazing and flashed W1; Shauna Coxsey couldn’t quite match that however but topped on her second attempt. Ai Mori also topped on her 3rd attempt but all the other women, remarkably including Janja Garnbret, all failed to top. As often happens the second boulder, W2, saw a change of fortunes. Miho Nonako topped on her 3rd attempt, Akiyo Noguchi on her 2nd go and Janja Garnbret found the top on her flash go. Shauna Coxsey secured the zone but failed to top making what looked like a rare route reading error when she lashed out for the top having missed the final hold out. Sadly W3 had been ever so slightly over-cooked by the setters and it proved to stop all the contestants dead in their tracks. The shortened bouldering final was therefore won by Akiyo Nonaka with Janja Garnbret coming in 2nd ahead of Shauna Coxsey in 3rd. 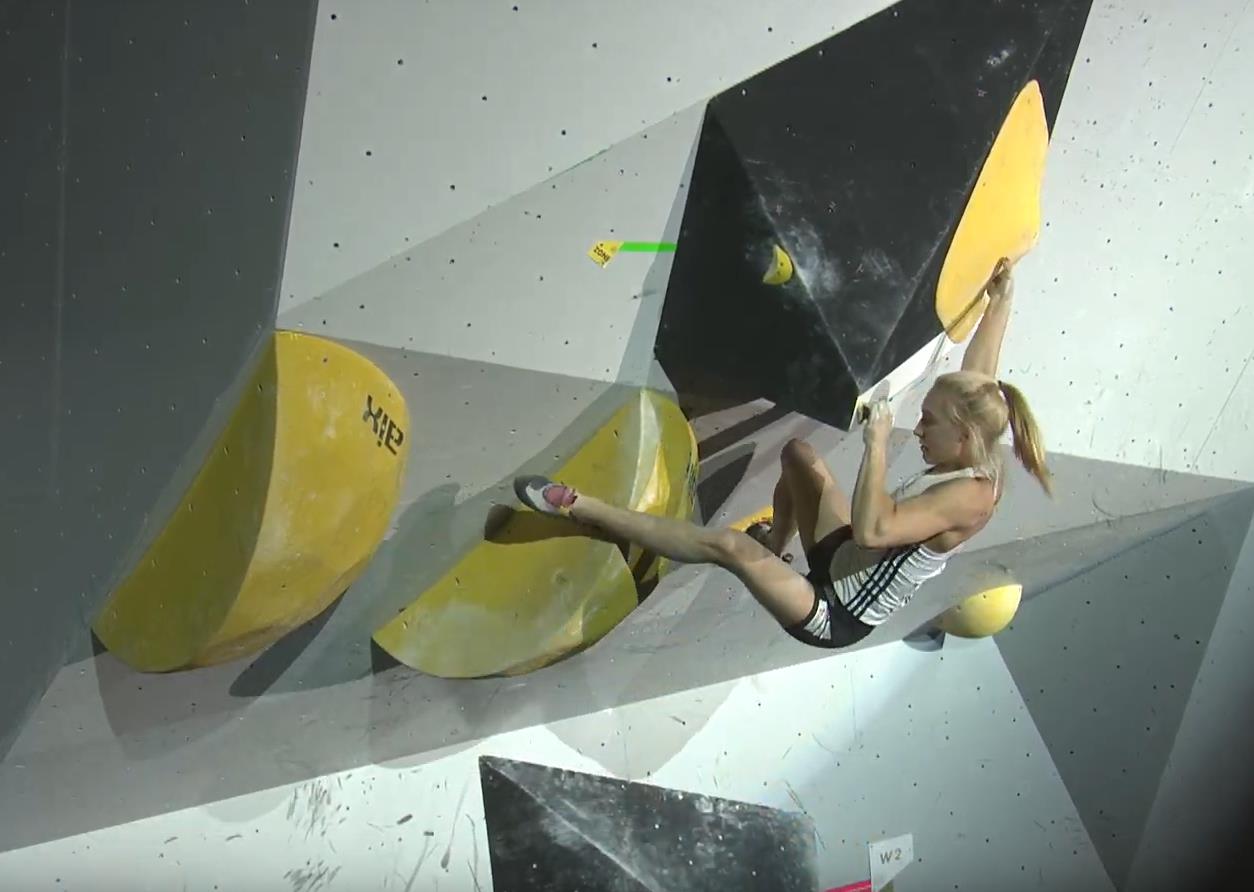 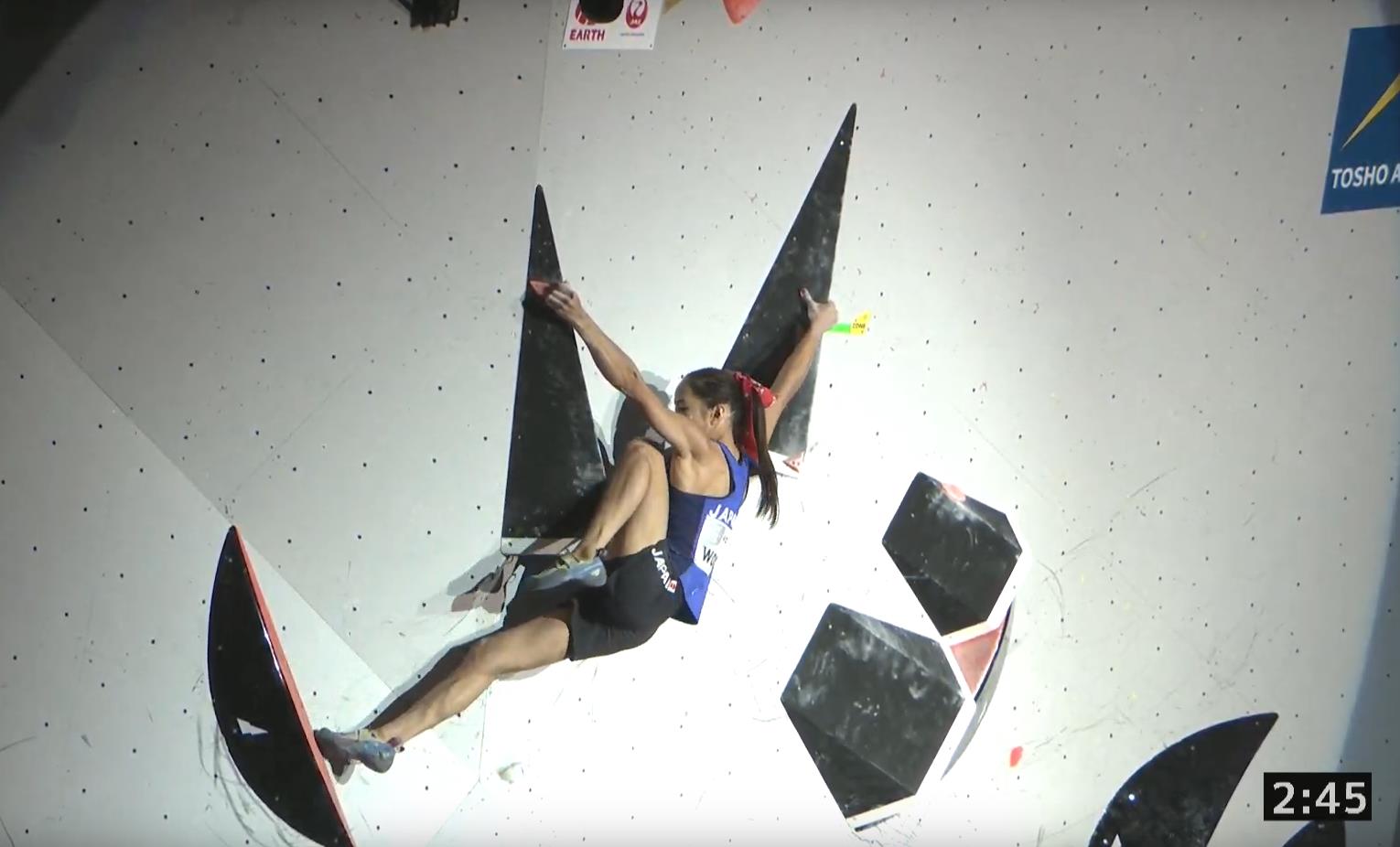 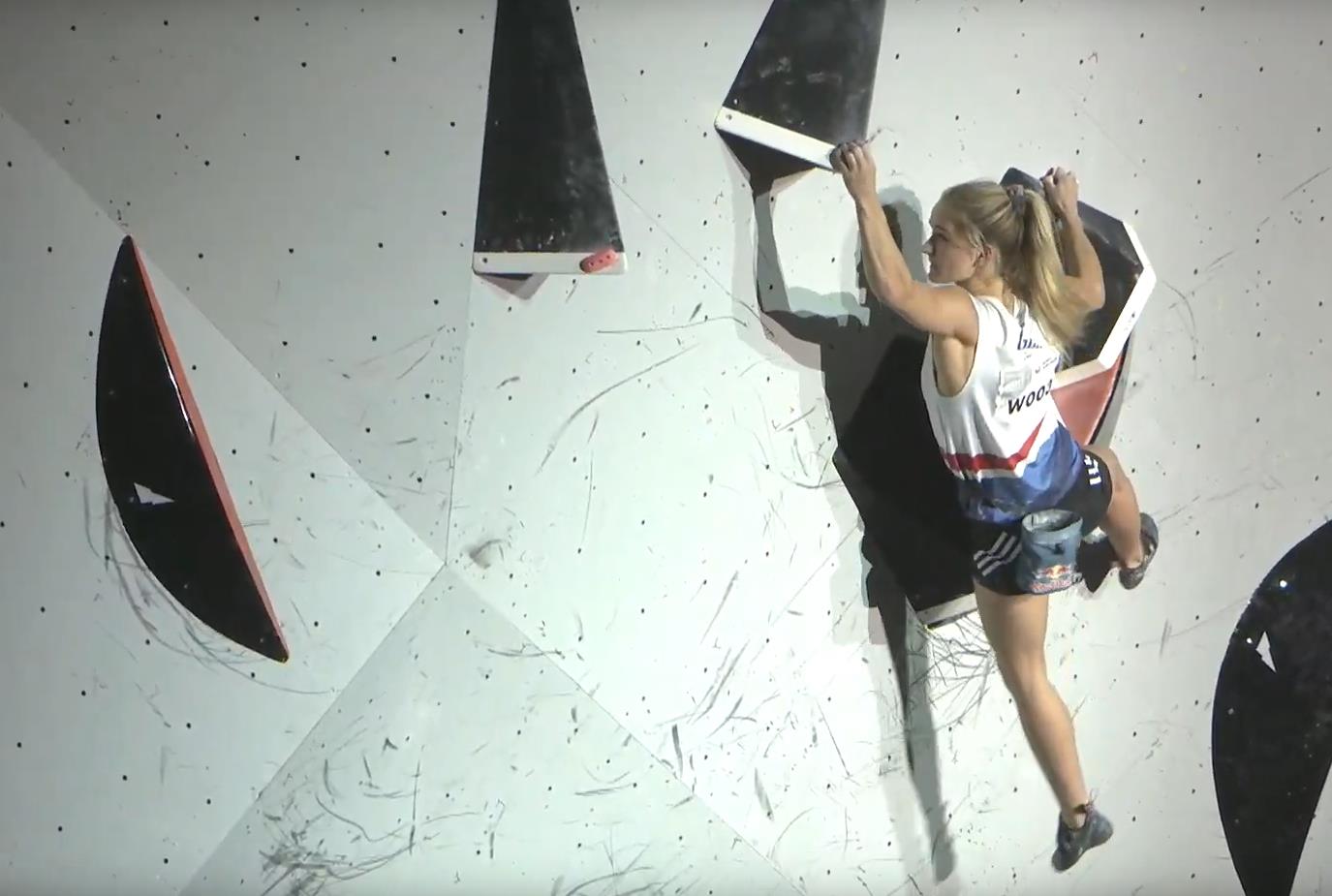 Finally, then the eight finalists emerged for the lead element; Coxsey was in first place, Noguchi in 2nd and speed specialist Miroslaw – yes, you read that correct - hanging onto her 3rd place forcing Garnbret down into 4th. Climbing first Ai Mori battled like a trooper and was able to hang on by the skin of her teeth through a low crux before she ploughed on and ultimately topped out in a(nother) remarkable lead performance; remember she’s still only 15 years old! 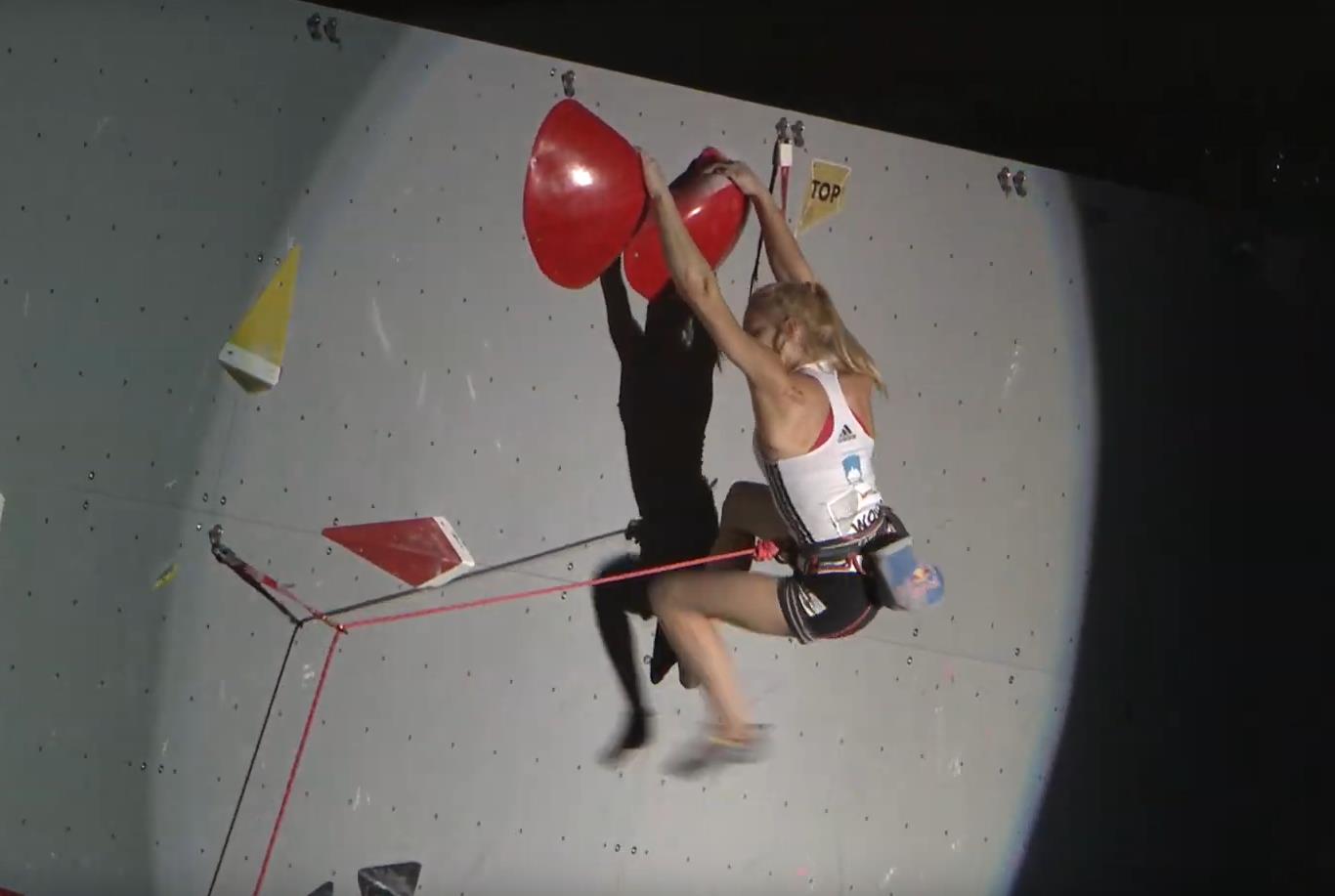 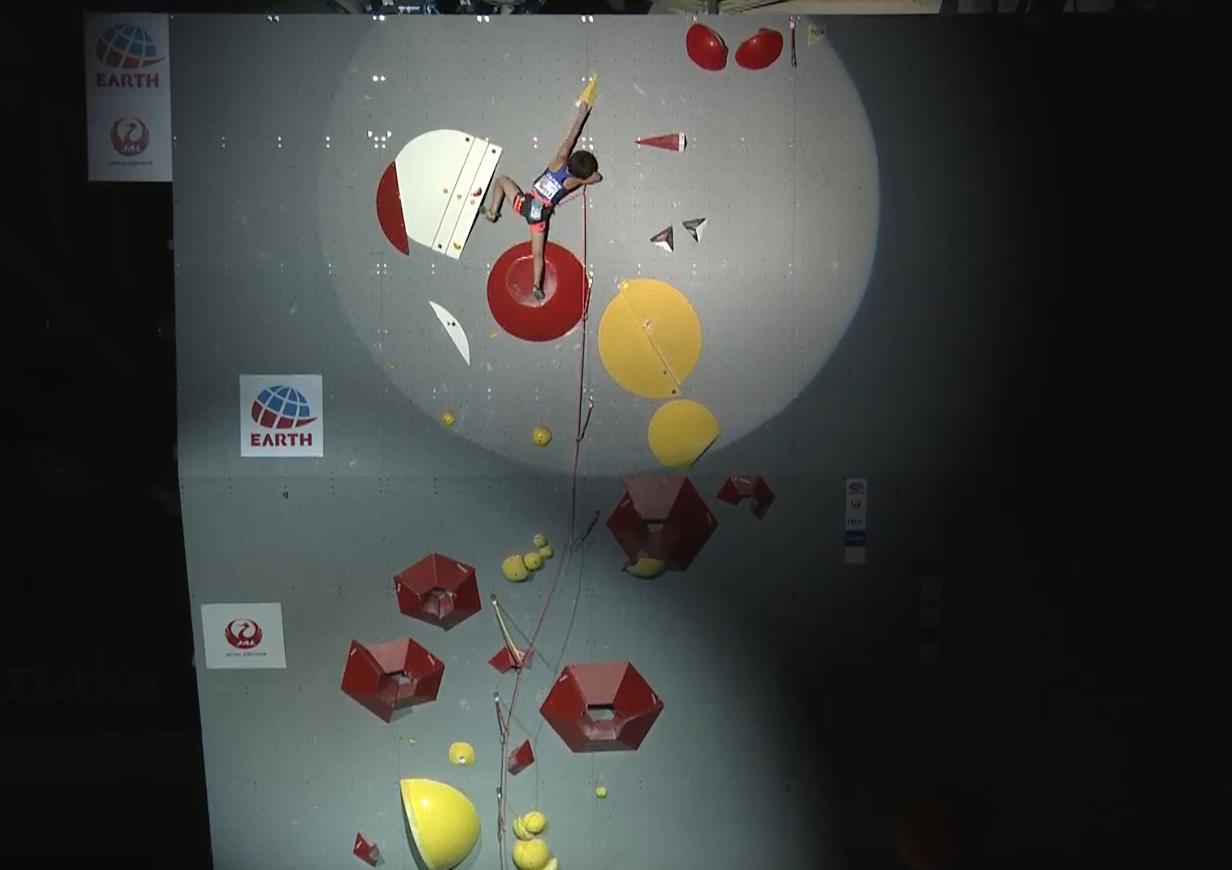 Janja Garbret, climbing fifth put in a typically business-like performance and also topped having survived a slight wobble on the headwall.  That left Akiyo Noguchi to climb next to last and she switched up a gear and climbed very quickly to the top before finally falling off on the very final move. When Shauna Coxsey emerged last to climb the pressure was really on. Despite climbing steadily she made very good progress before falling off pulling onto the headwall.However, following the event Shauna Coxsey was deemed to have touched a bolt and was dropped down from what was initially 4th place to 7th place in the Lead in a similar incident to what happened to Adam Ondra. As disappointing as that was it didnt however affect her overall placing as even with the revised Lead placement and increased points she still finished ahead of Aleksandra Miroslaw and so maintained her overall 3rd place in the Combined results.

Computing the scores Janja Garnbret had won the Combined event to secure yet another World Championship victory - her third at the Hachioji event; Akiyo Noguchi came 2nd and Shauna Coxsey finished in 3rd both athletes adding further to their World Champioship medal tally.

Finally then, and looking forward to the Tokyo 2020 Games Janja Garnbret, Akiyo Noguchi and Shauna Coxsey have now all qualified as well as Aleksandra Miroslaw, Miho Nonaka, Ai Mori and Futaba Ito. However, because of the two per gender per country maximium quota, 8th and 9th placed athletes, Petra Klingler and Brooke Raboutou, have also qualified for the Olympics. Assuming that Japan will accept the two allocation places within the required timescales they have until June 6th next year to actually decide which two athletes they will actually send to Tokyo Games.

Watch the Women’s Combined Final below…