In a high drama event at the World Championships Tomoa Narasaki, Jakob Schubert and speed climbing specialist Rishat Khaibullin respectively took the Gold, Silver and Bronze medals in the Men’s Combined at Hachioji after Alex Megos retired with a finger injury and Adam Ondra fail to qualify. 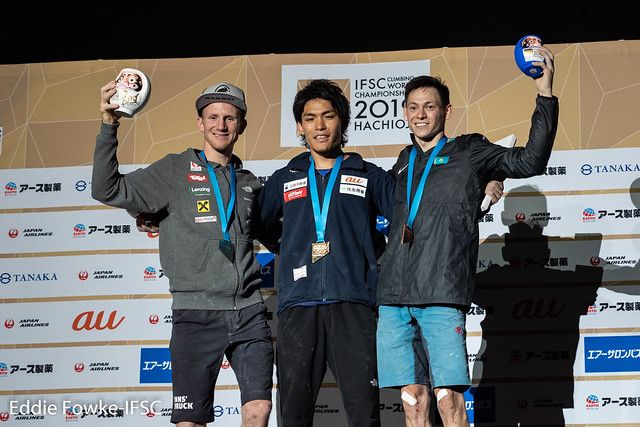 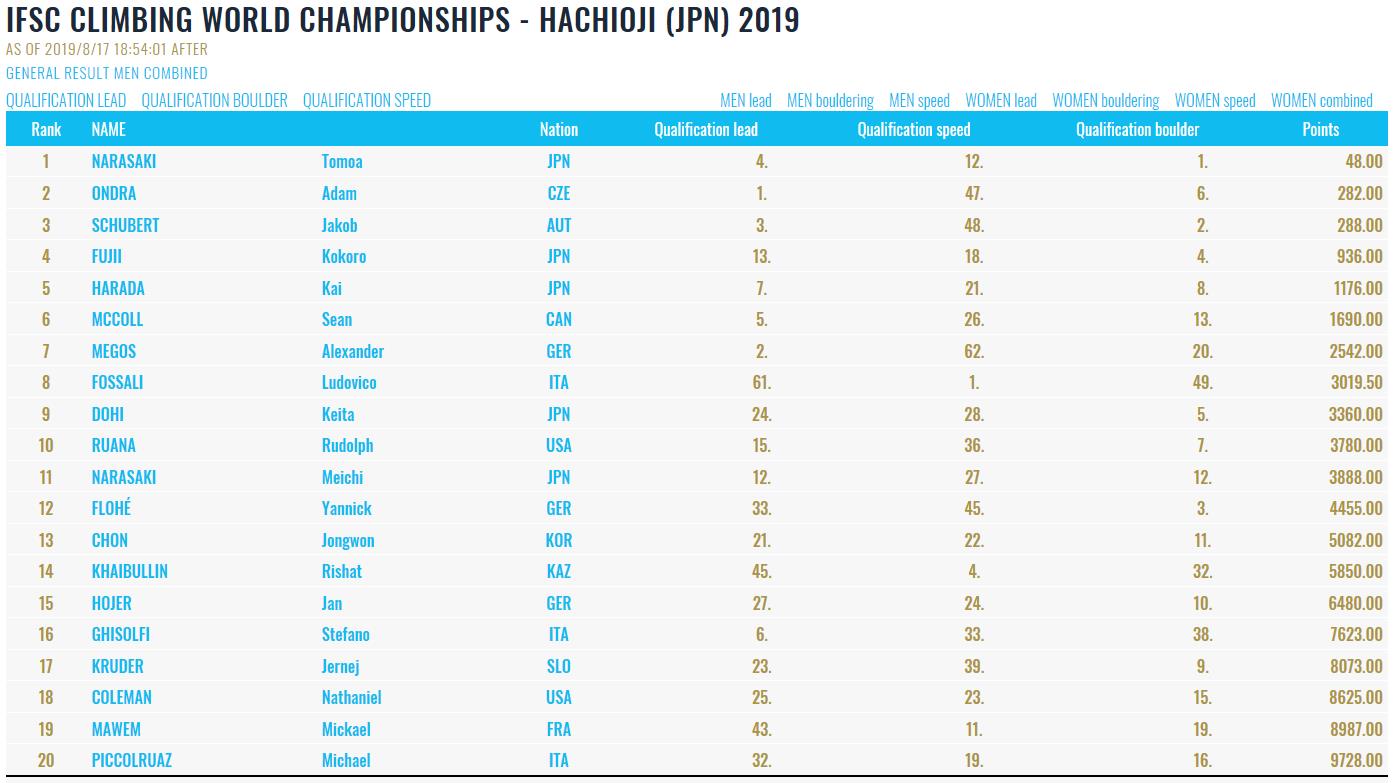 The Men’s Combined qualification round held last Sunday was nothing if not a high drama event!

Alex Megos however was absolutely on fire in the bouldering element and topped all four blocs to finish in top position giving him a combined ranking of 17 (1x17) after 2 events.

By comparison Adam Ondra had another shaky and unsettled round in the bouldering. Having looked under pressure from the get go Ondra took multiple attempts to top the first 3 blocs and then failed completely to make any impression on M4 getting sucked into a wrong method and ultimately finished in 6th in bouldering giving him a combined score of 120 (20x6).

Tomoa Narasaki, having won the Boulder World Championship earlier in the week finished in 6th.

The lead element was also full of high drama not least because of a number of appeals. Sean McColl ‘z-clipped’ but corrected and ultimately went high on the route. Jakob Schubert looked tired but doggedly fought like a warrior to come second. Megos looked very determined and crimped hard to take the lead but with Adam Ondra still to climb the Combined qualification was clearly going down to the wire. When Adam Ondra came out to climb he looked determined and climbing quickly it looked like he had a point to make. However a missed foot move deposited Ondra on the rope and has he lowered to the ground he looked as though he’d been robbed. However, that’s when the real drama kicked in as his problems got worse when he was judged to have stood on a bolt early on the route as a result of which he was marked down from hold 34+ to hold 10 which meant he finished the lead element in 18th and having slumped down the overall rankings failing to make the cut into the Combined Final. Ondra’s dream to qualify for the Olympics at Hachioji had crashed!

By comparison speed climbing specialists Rishat Khaibullin and Mickael Mawem did well and both qualified for the Final.

Watch the Men’s Combined Qualification below…

The Men’s Combined Final kicked off with a superb Speed element with many of the individual runs containing some very tight head-to-head competitions. Rishat Khaibullin was clearly the favourite to win the Speed and he progressed steadily through the event slowly decreasing his times as the pressure from other competitors increased. His win however never looked in doubt and he won the Final run with a time of 5.915secs against Tomoa Narasaki who unfortunately stumbled. Narasaki had however recorded some spectacularly quick runs earlier in the speed event even beating Mickael Mawem with a time of 6.159secs in the semi-final run. Interestingly, as times for non-speed specialists continue to reduce it looks as though climbers like Narasaki will be recording sub 6secs runs in the near future. 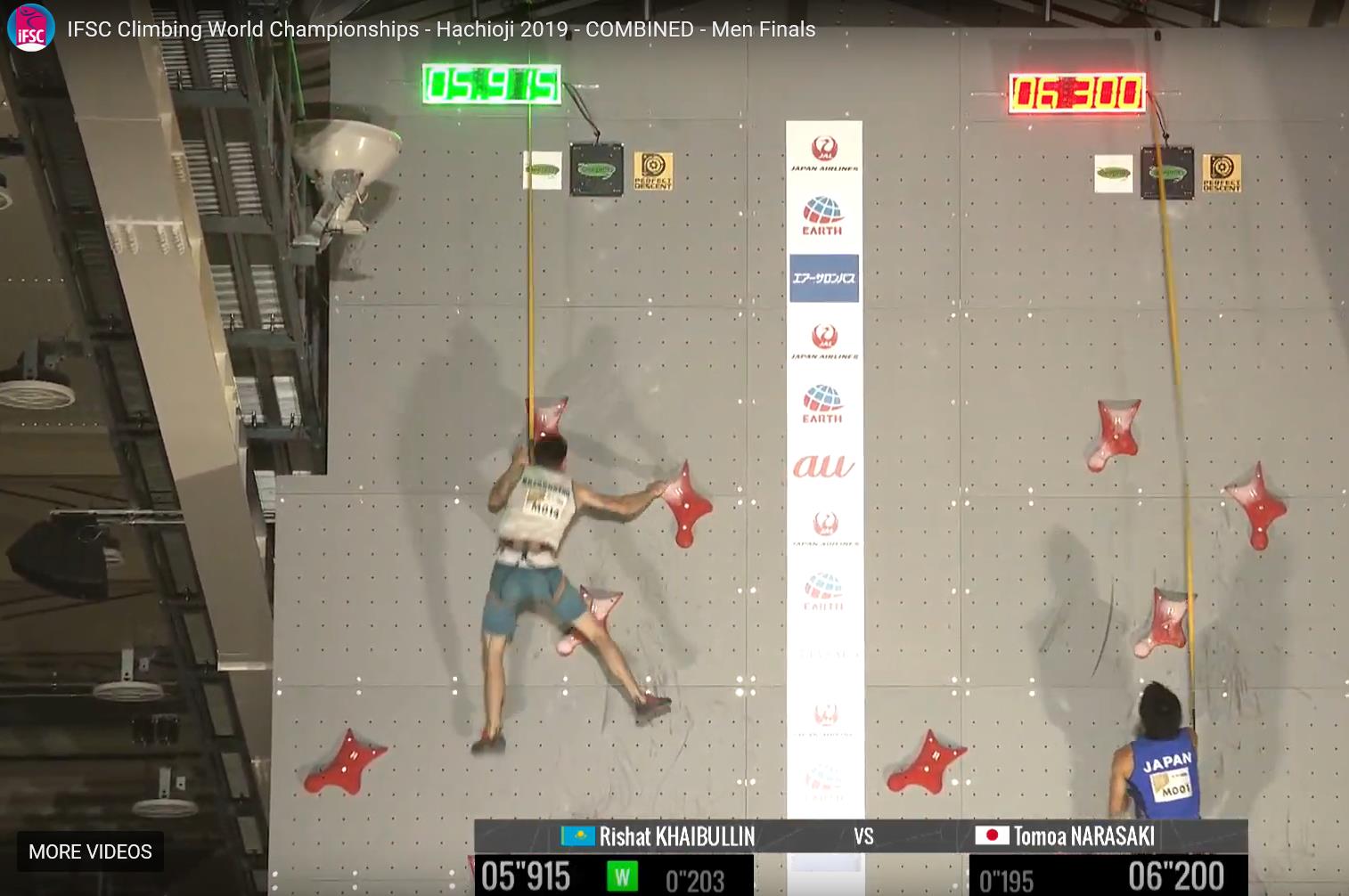 In the small final Kai Harada (6.348secs) beat Mickael Mawem (6.716secs); Harada taking 3rd and nudging Mawem into 4th. Farther down the Speed rankings, Kokoro Fujii recorded 6.895secs and Jakob Schubert stopped the clock with a 7.002secs. Alex Megos did a succession of faster and faster time and although he finished the Speed in 8th he recorded 7.570secs to the delight of the crowd.

Alex Megos, having finished last after the Speed element, emerged first in the Boulder round. Immediately he pulled on and secured the zone on M1 but then fell off. His second attempt was similar but then he realised he’d pulled a finger and to the shock and horror of everyone watching he withdrew from the Combined Final! As disappointing as it was to loose Alex Megos when the event was perhaps ‘ripe’ for him to do well and podium it was by far the most sensible decision especially having secured Olympic qualification.

M1 continued to wreak havoc with the other Combined Finalists none of them getting much beyond the zone. Tomoa Narasaki however emerged and promptly utterly demolished the bloc flashing it comfortably on his first attempt.

It was quickly evident that M2 was another stern bloc when all the favoured boulderers were taking several attempts to even get to the zone. Meichi Narasaki, stepped up the pressure on his older brother by getting the zone on his second attempt and almost topped out. Tomoa however, continued his bouldering rampage securing the zone on his first attempt and then getting the top by an astonishing double handed flying dyno on his second attempt.

Ominously, M3 was on the same section of the bouldering wall as W3 in the Women’s Combined yesterday. When Schubert have used nearly half his allotted 4 minutes before falling off several moves into the bloc it was starting to look that the setters had over-cooked it again. Kokoro Fujii however blew that out of the water when he unlocked the sequence and found a top on his second attempt. Meichi Narasaki however went one better and got the top on his flash go; Mickael Mawem got the top on his 4th go and then it was Tomoa Narasaki’s go. What, everyone thought, could Narasaki do? The answer wasn’t long in coming and he too flashed M3 remarkably having recovered from a slip down when he didn’t quite latch the final move!

Tomoa Narasaki was simply on another level in the bouldering to the other competitors and he took the very well deserved win with three tops; Meichi Narasaki finished in 2nd and Koroka Fujii finished in 3rd to complete the Japanese clean sweep in the Combined Boulder element. 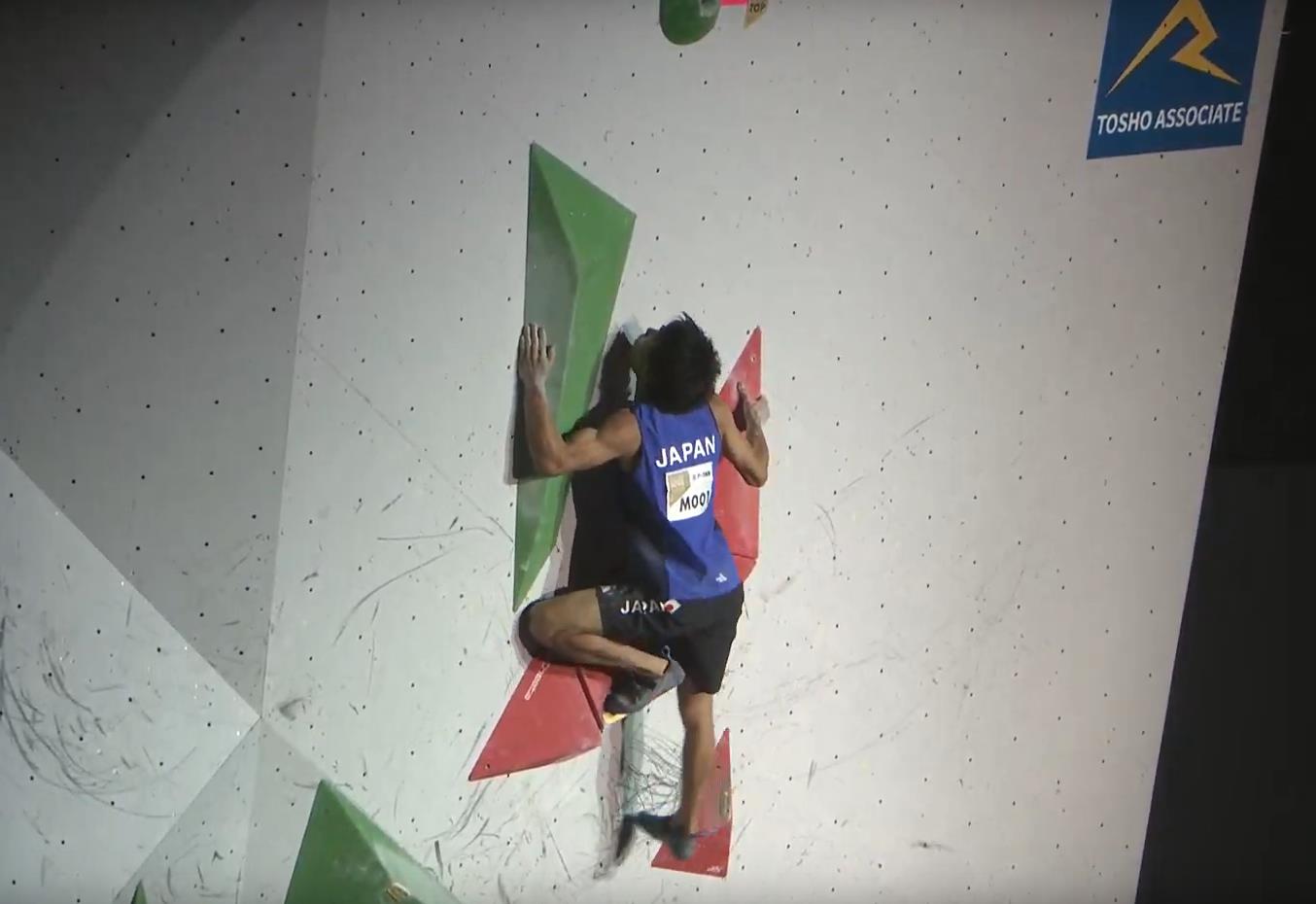 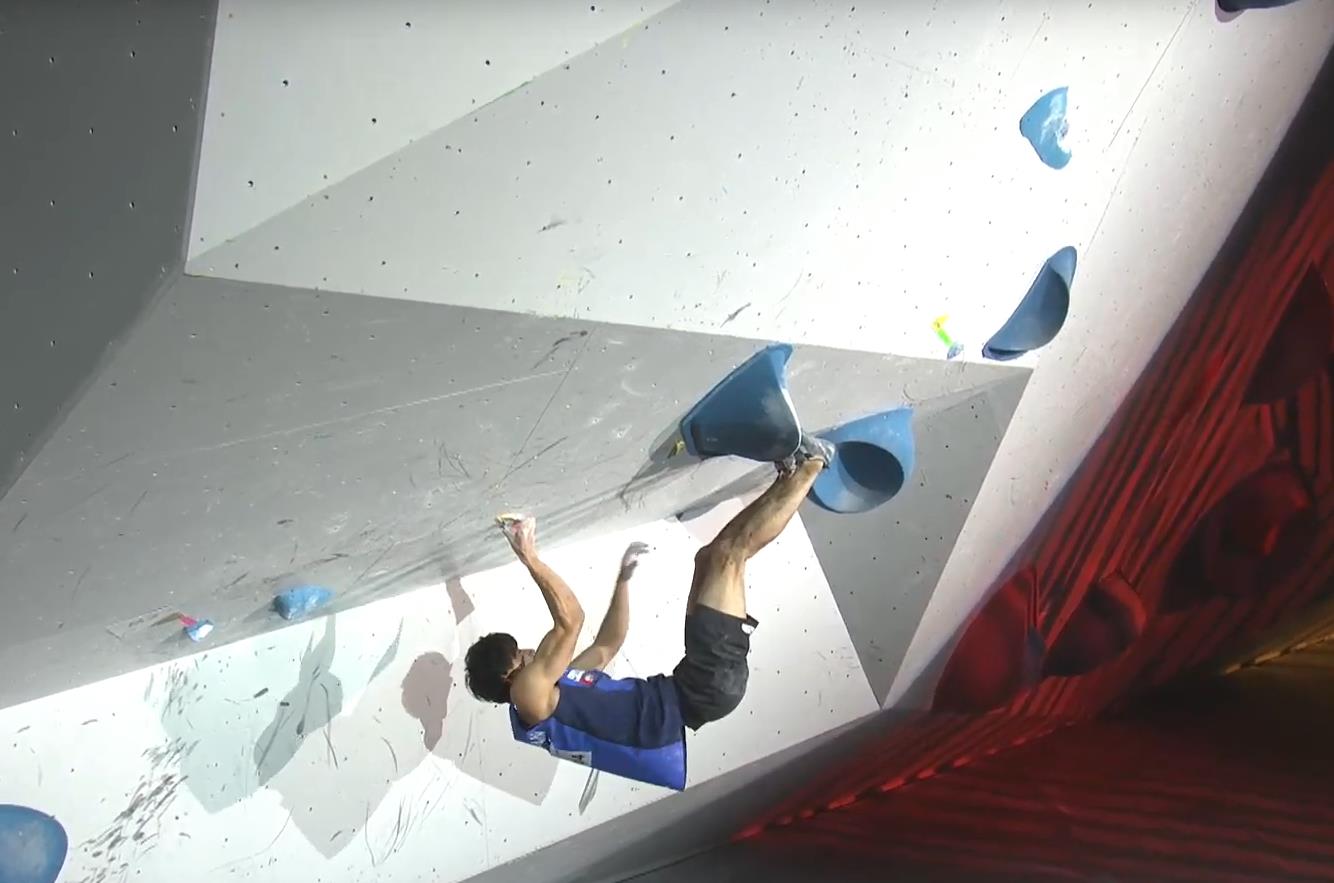 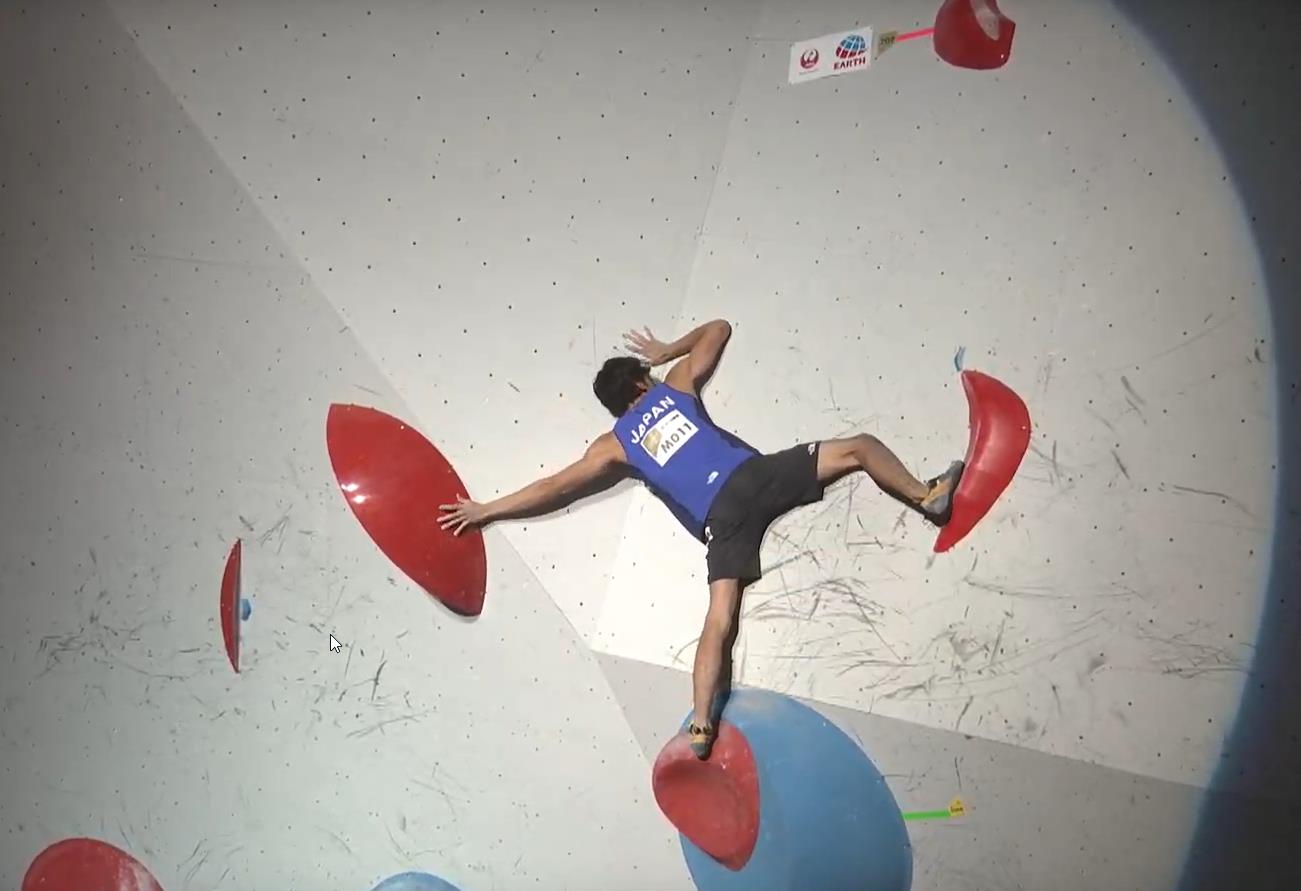 With Alex Megos now missing for the lead the way was open for Jakob Schubert to stamp his authority on the final element of the Combined and he did exactly that when, climbing first, he cruised to the top in what was a pretty quick time. Kai Harada came out to climb second and he too put the gas down and climbed quickly before falling off to move 31 on the headwall. Kokora Fujii was next out and he too was determined to show the Japanese selectors what he was capable of delivering on the lead wall and he climbed well but tired suddenly just before Harada’s high point.

Next out onto the lead route were Mickael Mawem and Meichi Narasaki. Both climbed quickly and although they looked like they had some gas left in their respective tanks they fell relatively low on the route having made errors. Rishat Khaibullin was next out and as the so-called speed specialist it seemed that the stage was set for him to deliver an upset. Not surprising he climbed reasonably quickly and fairly efficiently and soon inched beyond both Harada and Mawem’s high points before quickly gassed out and falling when got himself into difficulty having virtually climbed past two clips and started to reverse to clip. Notwithstanding Khaibullin’s errors he’d climbed superbly and had done enough to finish the lead in 5th place which really was an excellent performance; once again confounding the commonly held view amongst many that dismiss speed as a none climbing event and believe that speed climbers wont feature in the overall standings in a Combined event. Finally, Tomoa Narasaki emerged as the final climber on the lead wall. Climbing in his familiar quick and confident style he was soon on the headwall but fell having ‘lost’ his feet. Nevertheless he finished 2nd in the Lead behind Schubert whilst Kai Harada finished in 3rd. 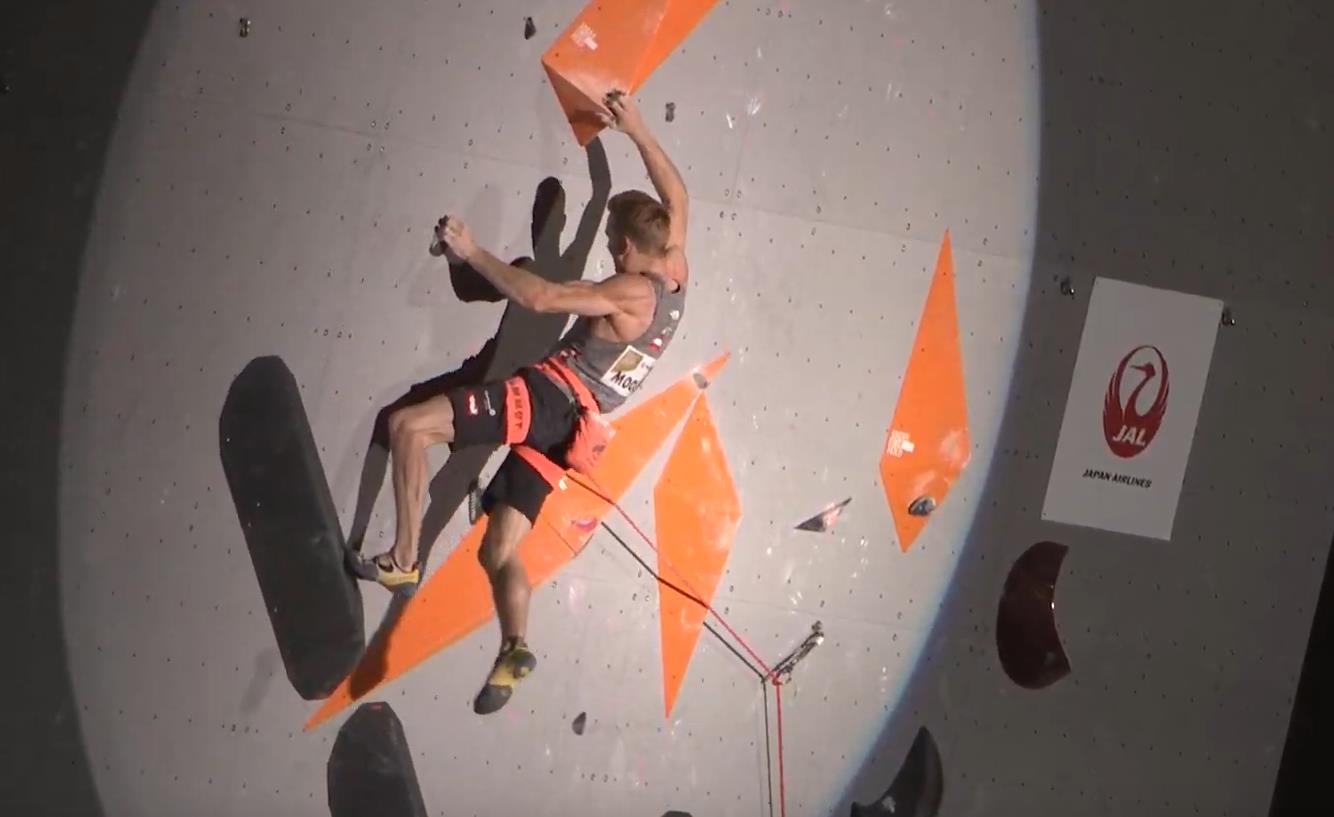 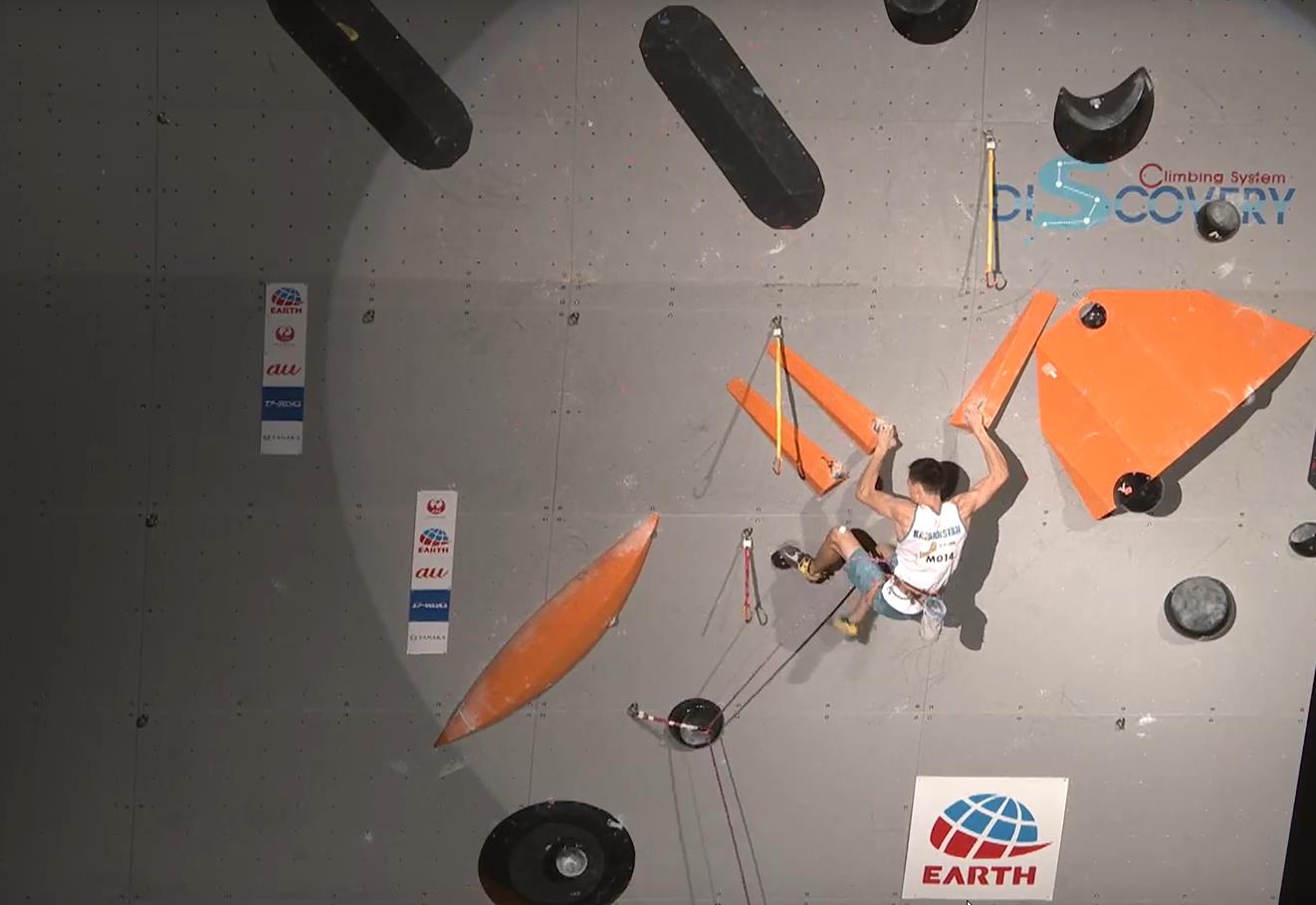 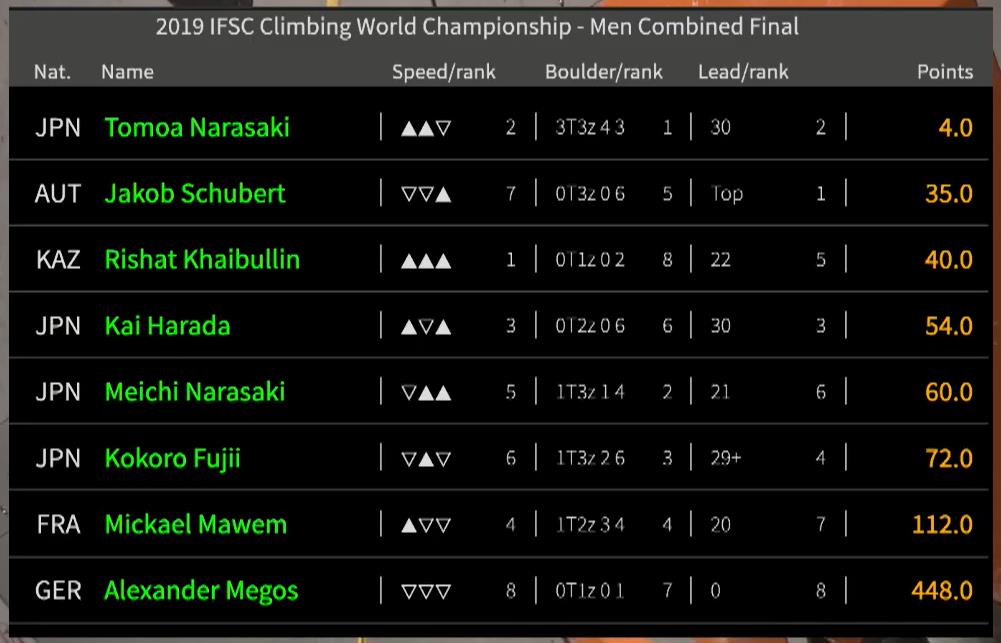 Watch the Men’s Combined Final below…