In a mammoth three hour plus lead last Saturday, Greg Boswell got the third winter ascent, ground-up, of Anubis XII/12 on The Ben. The day after it was his birthday; some birthday gift! 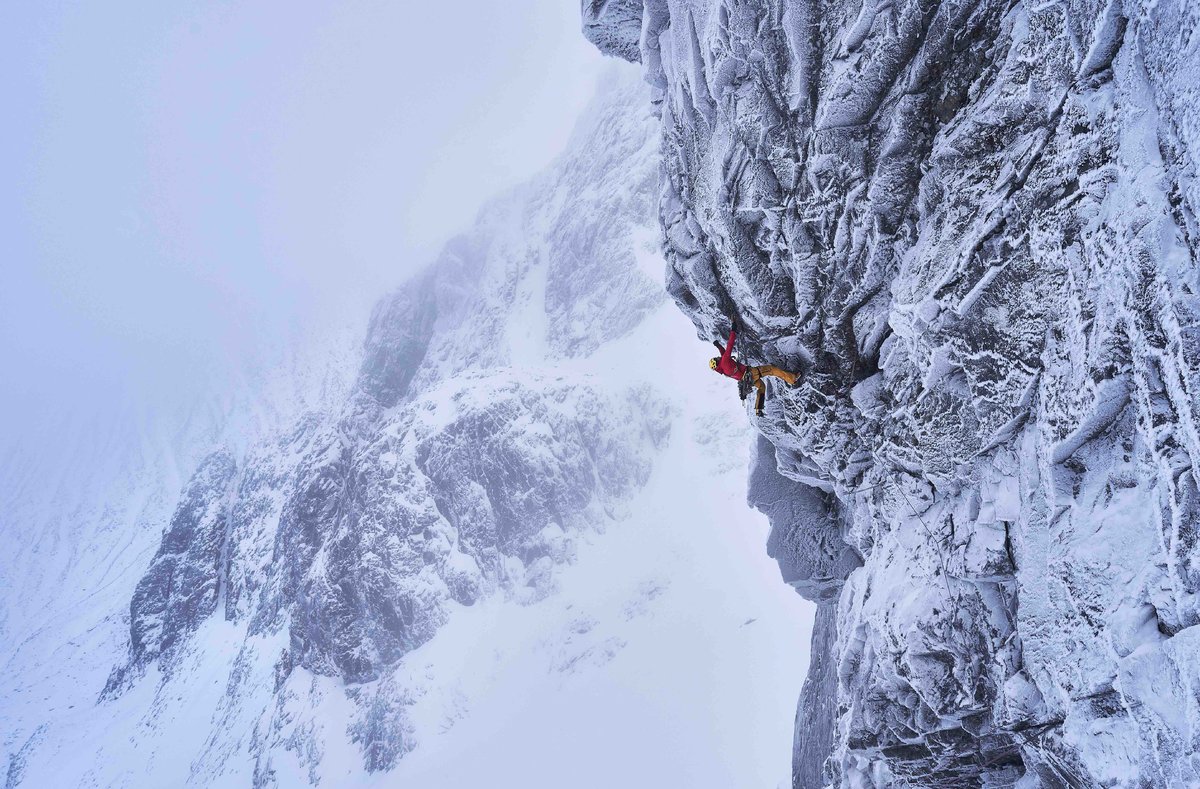 Anubis was originally climbed as an E8 summer route by Dave MacLeod back in July 2015. Five years later Dave was back for the first winter ascent. Graded XII/12, it was the hardest route in the country and one of the hardest of its type worldwide. Two years ago Swiss ace, Dani Arnold, made the second winter ascent although not without considerable effort. Click here for that report.

The same winter that MacLeod shattered the winter ceiling with his ascent of Anubis, the young Greg Boswell was cutting his teeth with such routes as Never Mind IX/9, Corrie an Lochain, To Those who Wait IX/9, The Ben and Mammoth IX/9, The Brack. In February 2011 Greg did an early repeat of The Hurting XI. Grade X outings – often new routes as well – were being ticked off with considerable regularity. By February 2015, Greg did the first ascent of Banana Wall XII – his first XII route. Click here for that report.

But another route, Anubis, was occupying his mind. In early December 2018 Greg did The Forge X/10; finally, winter 2018/19 had kicked off! Last Wednesday, the time had come; Greg tied into the rope below Anubis for his ground-up, on-sight attempt. He made it past the roof but fell, not once but twice, off the wall beyond. Exhausted, Greg lowered off stripping the gear out as he went; Anubis 1: Boswell 0.

On Saturday he was back again however. In a marathon that lasted three and a half hours Greg finally topped out; Anubis was in the bag; his goal achieved!

Posting on-line Greg described the route and the climbing; “The climbing on Anubis is not just outrageously steep and pumpy, it’s also home to some of the thinnest and most technical climbing I’ve done. Along with trying to find adequate protection and searching for the minuscule hooks, you have to keep your head together as the pitch is 40+meters long. Anubis is up there as one of the hardest winter routes I’ve done, worldwide!”

Two days after his ascent CLIMBER have been in touch with Greg. Still exhausted, here are Greg’s caffeine-fuelled thoughts…

Congrats on repeating Anubis; how does it feel to be the third person to have lead what is one of the hardest mixed routes in the world?

Thanks! Well, it feels…tiring, but also very fulfilling! Not only am I super psyched to have achieved this personal goal, but I’m also really happy that a route with this status is in my home country and on my favourite mountain in the world!

It was obviously a major mental challenge – not least going ground-up! What was the toughest aspect of getting ready to try Anubis?

One of the hardest parts was trying to get mentally ready. You can be the fittest climber on the planet, which I’m very much not, but if you loose your head and rip an axe well above you gear, you can get very hurt. Making sure I knew I could keep a cool head was one of the biggest parts of my preparation. Sometimes sacrificing an on-sight ascent to hang around and be safe is the much better option! I’m not into getting hurt or putting myself in situations that are miles out of my control, although it does sometime happen, but minimising it is a big part of my climbing style.

On your first day of trying it you took two falls above the roof section. Did that calm you down or just heighten your tension?

Yeah I think this definitely helped a bit on the mental ‘fear’ front, but when you fail on a route due to fatigue and you’re only a third of the way up it and still mid crux, it does have an impact on your thoughts of success. I was no longer scared of the roof section, but I was now not sure if I had it in my arms and body to succeed. These are the joys of climbing things close to your limit ground-up, you don’t know what is above or if you can do it at all.

And you stripped the gear out as you lowered off on Wednesday?

I lowered off a wobbly nut I placed on lead. I had to leave something in to lower off and strip the route unfortunately. Scarily when Robbie seconded it on Saturday he flicked it out with easy.....gulp.

What is the protection like on Anubis; is there much in situ gear for example?

The protection on Anubis is there if you can hang around to figure it out and place it. The problem is it’s either crazy steep or the hooks are so bad you can hardly breath without fear of blowing off them, so searching through your rack to find the right sized nut or placing a pecker can be a bit challenging! There was an in situ nut after all the hard climbing; you’re in a no hands rest at this point, and an obvious rappel point at the top. None of that added any ease of climbing the route, but Robbie and I left nothing on Anubis and returned it to its original state!

The in situ nut is after all the hard climbing and had obviously been used as a rebelay to back strip the route. Probably on Dani’s ascent.

How do you keep your mental and physical game together on a 3.5 hour lead like that?

It’s a tricky one, as it really doesn’t feel like that long when you’re on the route. You’re so absorbed by the climbing and figuring out the moves that time flies by really quickly. I was thinking at one point though that I needed to get a move on whilst on the steep section, as not to pump out and blow my energy stores. There’s a fine line between not rushing it and stepping on the gas!

Your second on the day, Robbie Phillips, seems to relishing the winter action?

Yeah it was awesome to have Helen Rennard and then Robbie Phillips out with me whilst trying Anubis. Robbie has just taken to focusing a good section of time towards winter climbing and it’s cool to see him progressing and learning along the way. Obviously he is super fit and capable in the mountains, but it’s really good to see him happy to sit back and second routes, not just hard ones like Anubis, eager to learn the skills he needs to progress. I think this will have a massive impact on his future progression through the grades. There’s no room for egos in the mountains in winter, that’s how people get hurt!

Having done Anubis, what are your next goals? Something even harder on The Ben perhaps?

I have lots of other projects in Scotland and abroad. I have things I’ve seen that will equal Anubis in difficultly and things I’ve tried that I need to go back for that are also hard. But I doubt I’ll be on anything as full on as Anubis any time soon. Then again, you never know.

So having heard the story from Greg’s perspective we couldn’t help but wonder what it was like from Robbie’s eerie perch? We really couldn’t resist asking him, not least because Robbie is only just starting out on this winter climbing game! His answers don’t disappoint…

You appear to have jumped into winter action at the extremely deep end but seem to be loving it?

I’m really loving it! I’ve dabbled in winter over the years, but never given it a good run. I’ve got some pretty big projects planned over the next few years that will require me to have more winter skills, in particular be able to get an axe out and climb, so I decided that now was the time to officially begin my winter career. It’s funny though, because I never did much winter, going out always felt like a big deal, but when you get out a lot, it just feels normal. I definitely think that the more you go out, the more fun you begin to have.

Tell us about the day with Greg from your perspective; firstly, what was going through your mind belaying Greg and then how did it feel seconding Anubis?

Greg asked me if I’d be keen to climb with him that day and I jumped at the opportunity. Firstly, I was psyched to be able to witness something like this. Anubis is one of those routes that has a big reputation, but for myself I wanted to learn, and who better to learn from than Bozza!

I wasn’t nervous belaying Greg, he was pretty chilled about the whole thing, but after 3.5 hours belaying my feet were a bit more than chilled... More like frozen solid!

Greg’s approach was the most interesting thing for me. He has a great ethic, purely ground up, very little knowledge of the climb other than what he found out himself whilst climbing it. He likes to retain that adventurous element for his ascents, something which is really admirable, as it shows he’s not hunting for the big numbers, he’s going for the greatest experience! When he got through the crux (he fell off just above the other day) he was onsighting again, and this was where he took the longest. Marginal hooks, bad feet, hard to find/place gear and runout. You can’t quite understand until you get on it and that’s what I got to do next!

Is a lead attempt on Anubis on your bucket list now?

Seconding Anubis was an eye opener. It’s hard to describe, but for me in my early stages of winter climbing it felt akin to seconding Sharma on La Dura Dura! I was like “Wow, ok.... this is what 9b is like!”. The thing that still hits me now is that Greg did it ground up and was on the climb for 3.5 hours... I scraped my way up it on a top rope with about as much elegance as a giraffe wearing roller skates. I could do the moves, yes, but finding all the gear, and spending that much time on my arms on those terrible hooks and keeping everything tense for that long would be impossible for me at this stage. It’s certainly on my bucket list and I’d like to think that one day, maybe I could lead it in winter, but I’d need to learn a lot more about winter climbing movement skills and the subtleties of pick placement. As for summer, I think I’ll do it this year and get Greg to belay me for 3.5hours - haha it’ll probably be the first time anyone’s done a winter route to check it out for summer!

Greg was right, I was strong enough to second him on this... but leading it ground up is masterful.