Janja Garnbret and Manuel Cornu took the golds at the third IFSC WC Bouldering event of the season in Chongqing over the weekend. 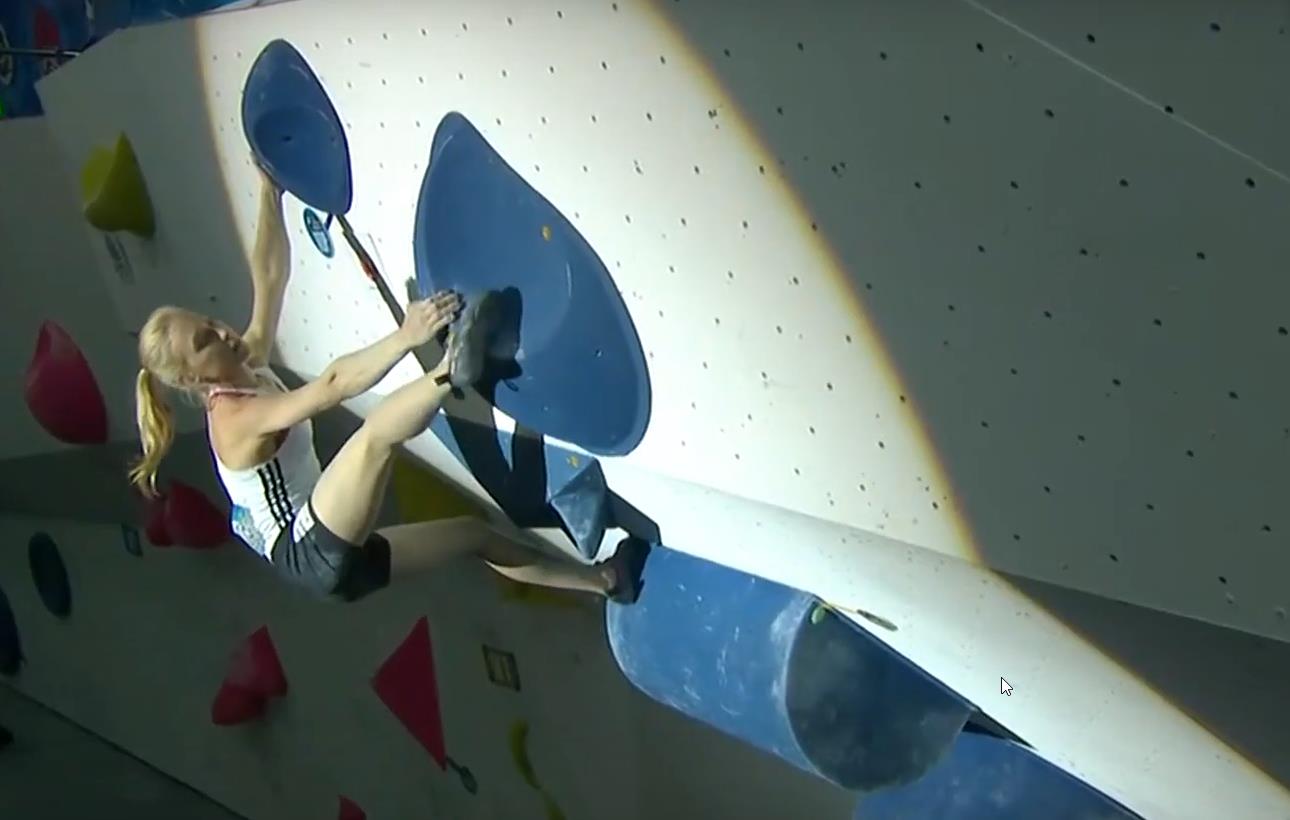 Following an exciting record breaking and PB-laden speed comp on Friday – click here for our separate report on that – qualification for the bouldering took place on Saturday in Chongqing. Janja Garnbret started, as she so often does, clearly meaning business and determined to take her third WC bouldering gold of the season home. Lucka Rakovec and Jessica Pilz, stayed in contention however; all three athletes getting five tops so were only separated by their attempts on the zones and tops. Chloe Caulier also competed in Group B and also collected five tops. Katja Kadic topped Group A closely followed by Akiyo Nuguchi, Petra Klingler and Jain Kim. No less than four Slovenian athletes qualified for the semis whilst Team’s USA and Japan both with had three athletes each through to the semi’s as well. Sadly, neither Shauna Coxsey nor Miho Nonacha travelled to Chongqing to compete; both are due to be back in the game however for Munich. Jennifer Wood, Jo Neame, Emily Phillips, Tara Hayes and Molly Thompson-Smith from Team GB finished in 23rd, 27th, 39th 49th and 61st respectively; Molly valiantly battling yet another finger injury.

The men’s qualifiers saw a raft of athletes with five tops. Amongst them was Dave ‘The Don’ Barrans going through to his first semi-final since 2016. As well as the usual semi-finalists, Jan Hojer and Sean McColl also qualified. Athletes not qualifying however were Alex Megos, Jernej Kruder and Stefano Ghisolfi – further evidence of the fluctuating fortunes in the men’s game. Team GB athletes Will Bosi, Nathan Phillips, Jim Pope and Billy Ridal finished in 25th, 26th 41st and 47th respectively. Adam Ondra, have picked up a sickness bug after the last comp in Moscow, was forced to withdraw but plans to return for the second Chinese leg next weekend.

The Sunday morning semi’s were the usual brutal affairs. Janja Garnbret and fellow Slovenian, Katja Kadic, were alone at the top with four tops apiece. The men’s semi seemingly re-defining brutal; only three athletes, Kokora Fujii, Anze Peharc and Tomoa Narasaki, managed two tops each and only seven other athletes collected one top each! In the rarefied air surround the top flight it’s never an easy calculation to get the blocs just right; it seems however on this occasion that the setters over-egged the difficult somewhat. 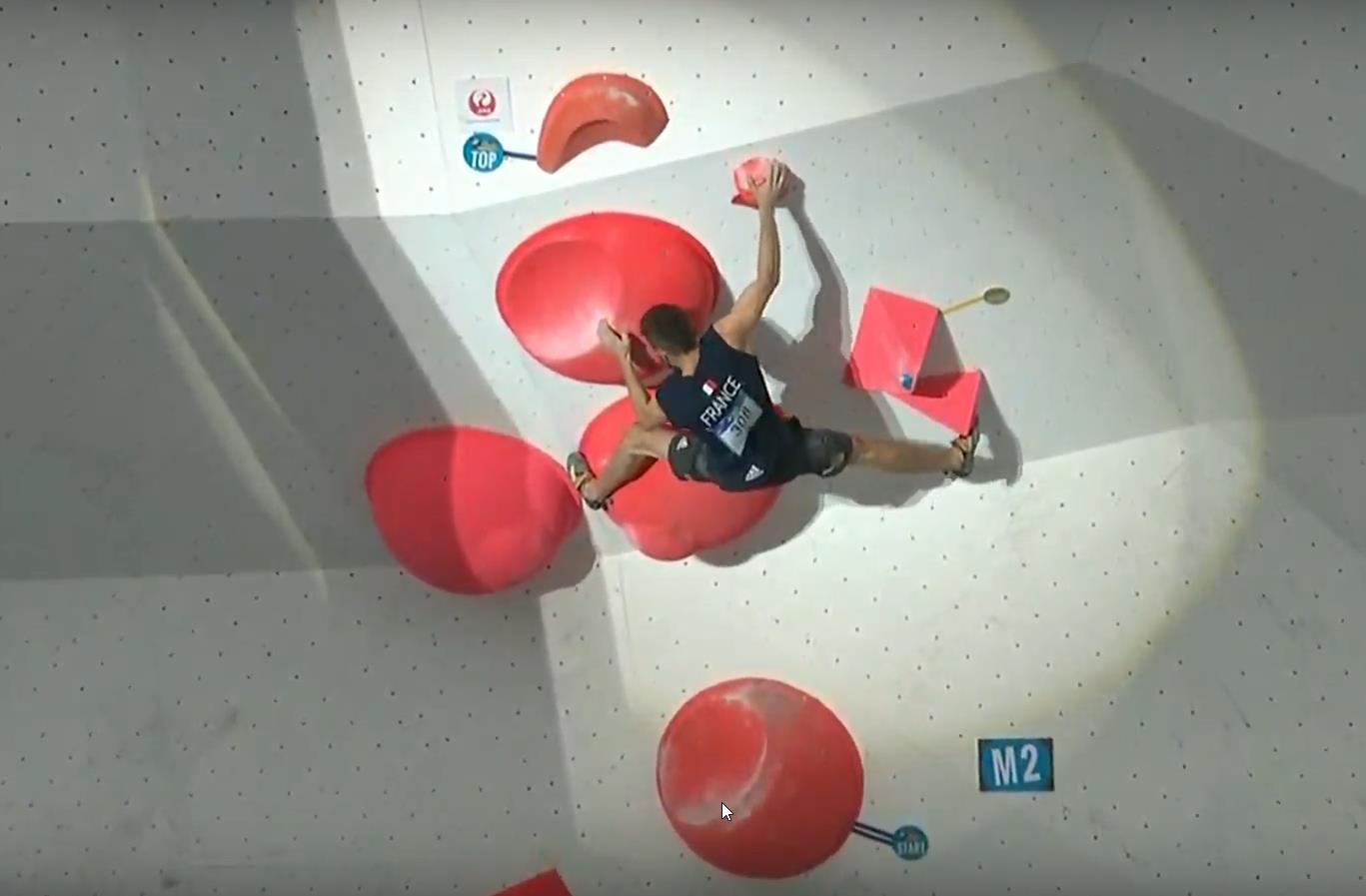 The finals kicked off with the men’s event. Tomoa Narasaki and Manuel Cornu got their game-faces on straight way both topping the first two blocs although Anze Peharc, Sascha Lehmann and Aleksey Rubtsov were fighting hard with one top apiece from the first two blocs - all flashed as well. M3 was the regulation ‘slab’ whilst Manuel Cornu alone flashed. Sadly, Tomoa Narasaki failed to ‘control’ both starting footholds so had to settle for a second go top. Ultimately this error was to haunt him. 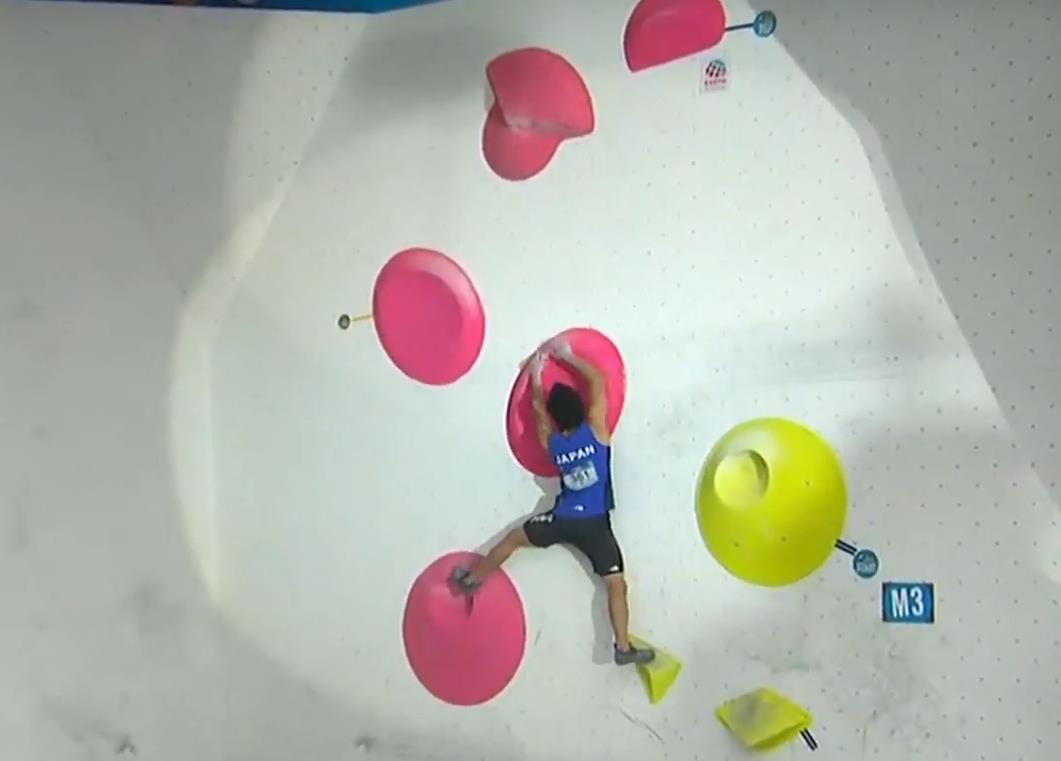 So with the slimmest of margins, Manuel Cornu emerged on the stage for M4. He fought his heart out but failed to top leaving the way open for Tomoa Narasaki to take gold. However, the top of M4 not only eluded Tomoa Narasaki but every other athlete with the exception of Anze Peharc. Peharc’s last minute, last bloc efforts not only earned him the appreciation of the crowd but elevated him from a sixth place finish to third somewhat unceremoniously dumping Sascha Lehmann off the podium and down into fourth. Tomoa Narasaki finished in second leaving Frenchman Manuel Cornu to collect his first ever WC bouldering win. Narasaki and Cornu are now second and third respectively behind Adam Ondra in the 2019 WC Bouldering standings with only 38 points separating all three athletes. 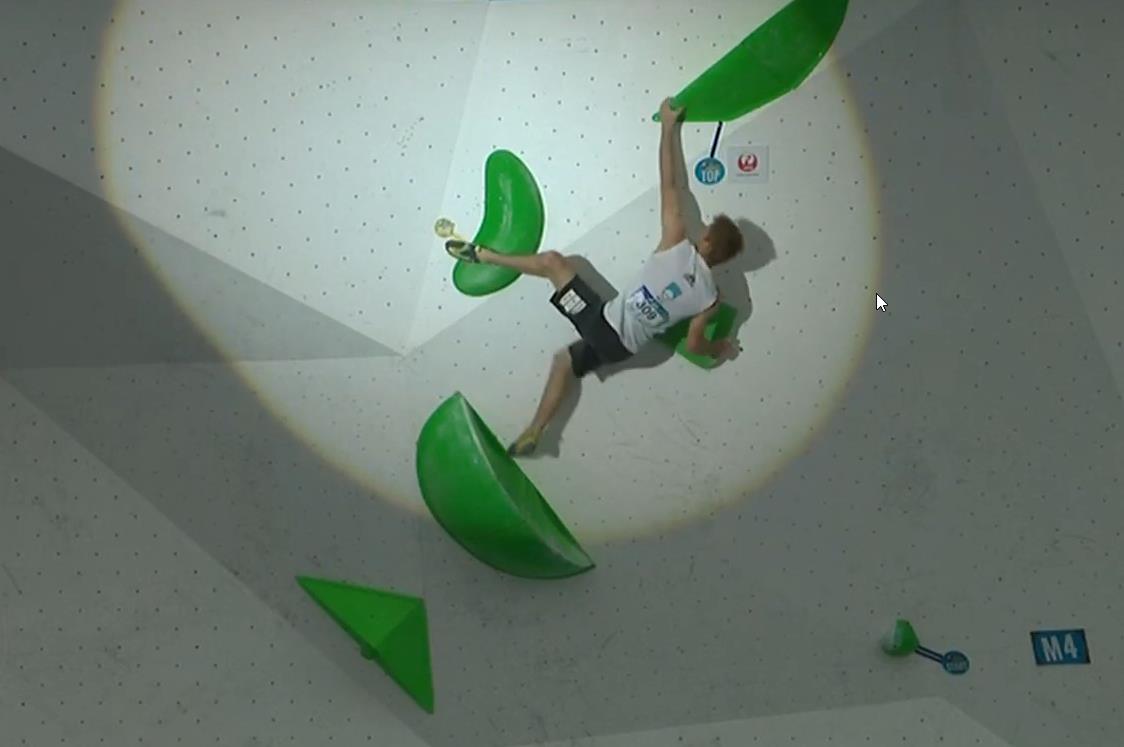 The women’s final errumpted with a flurry of flashes on W1 from Fataba Ito, Jessica Pilz, Akiyo Noguchi and Janja Garnbret; the later two absolutely hiking it and making it look like a warm-up rather than a bloc in a WC bouldering final! 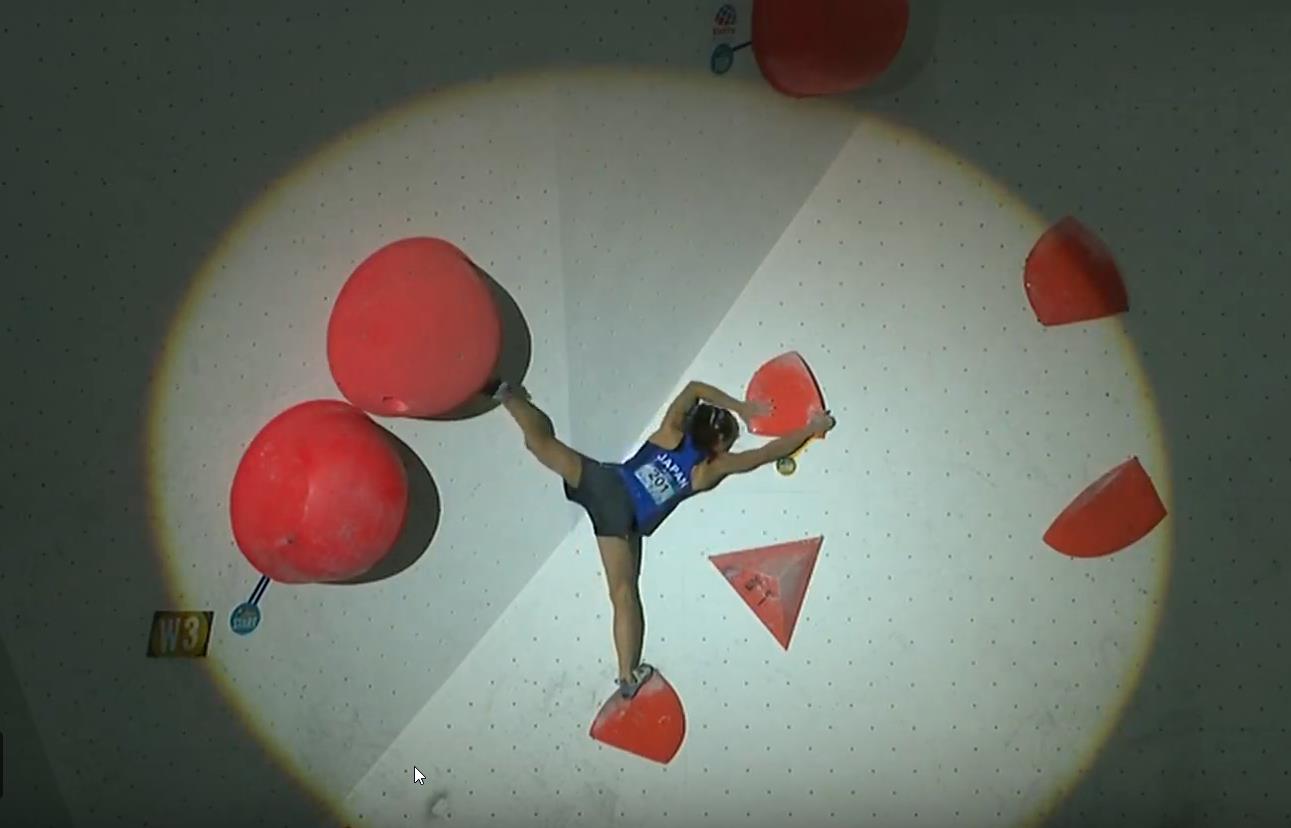 W2 involved a marginal start and duly seperated the field. Remarkably, Garnbret failed to flash it – the first occasion, for some time, that she’d dropped a flash in a WC bouldering final. By midpoint Akiyo Noguchi was ever so slightly ahead of Garnbret having collected her two zones in two attempts whereas Garnbret had taken three! Both had two tops as indeed did Jessica Pilz albeit taking more attempts. 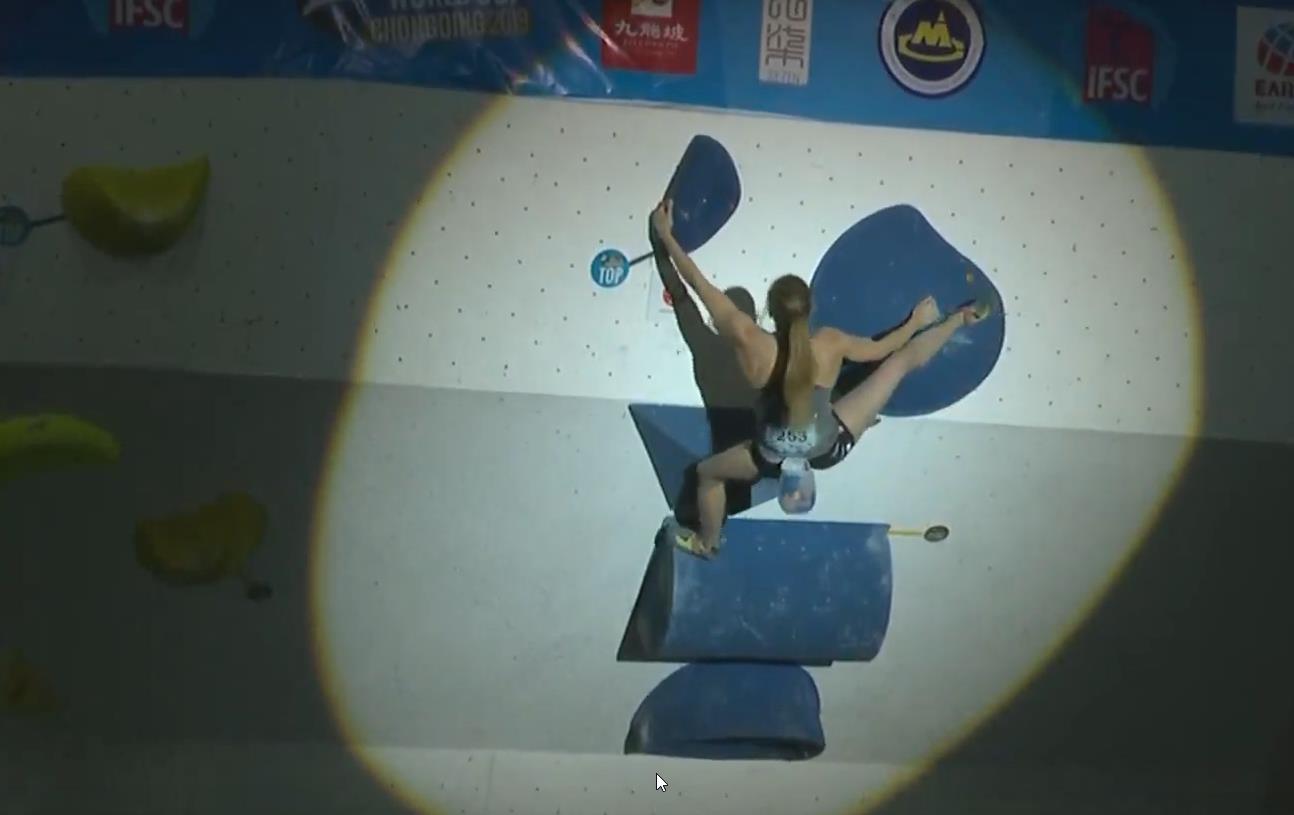 Jessica Pilz topping W4 on her 2nd attempt. Ultimately finishing in 3rd place overall, it was Pilz’s first ever bouldering podium; an excellent result from an athlete who usually frequents the podium at lead comps

Noguchi did W3 on her second attempt but Garnbret was back on point with a flash. Jessica Pilz kept the pressure on Noguchi and Garnbret with a second go top on W4 – a gnarly compression bloc with a flying start thrown in for good measure. Noguchi also topped W4 but Garnbret only needed two goes to collect her third WC Bouldering gold from the three comps held in 2019. Janja Garnbret now holds 300 points almost double that of her nearest rivals Fanny Gilbert (163pts) and Akiyo Noguchi (160pts). It’s still relatively early in the season yet but on her current form who would bet against Garnbret adding the 2019 WC Bouldering title to the three WC Lead titles she’s won in the last three years. All other competitors will, no doubt, have heard Garnbret say during her post victory interview that she’s intending to do all the bouldering events, all the lead events and a number of the speed events as well. Clearly, she’s gunning for early qualification for Tokyo!! 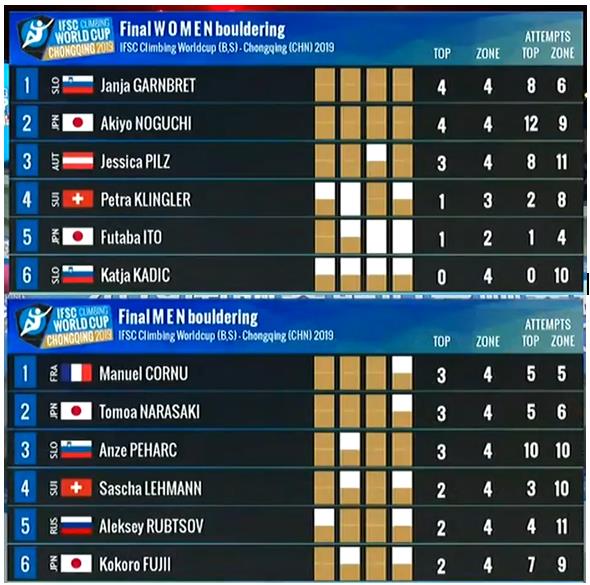 Next week the athletes travel to Wujiang for another double instalment of both bouldering and speed. Meanwhile watch the Chongqing finals below…