Franco Cookson has just climbed MYXOMOP – a seriously high highball - on the Barry Boulder, an amazing-looking stand-out boulder at Stoupe Brow, near to Robin Hood’s Bay on the North Yorkshire coastline. 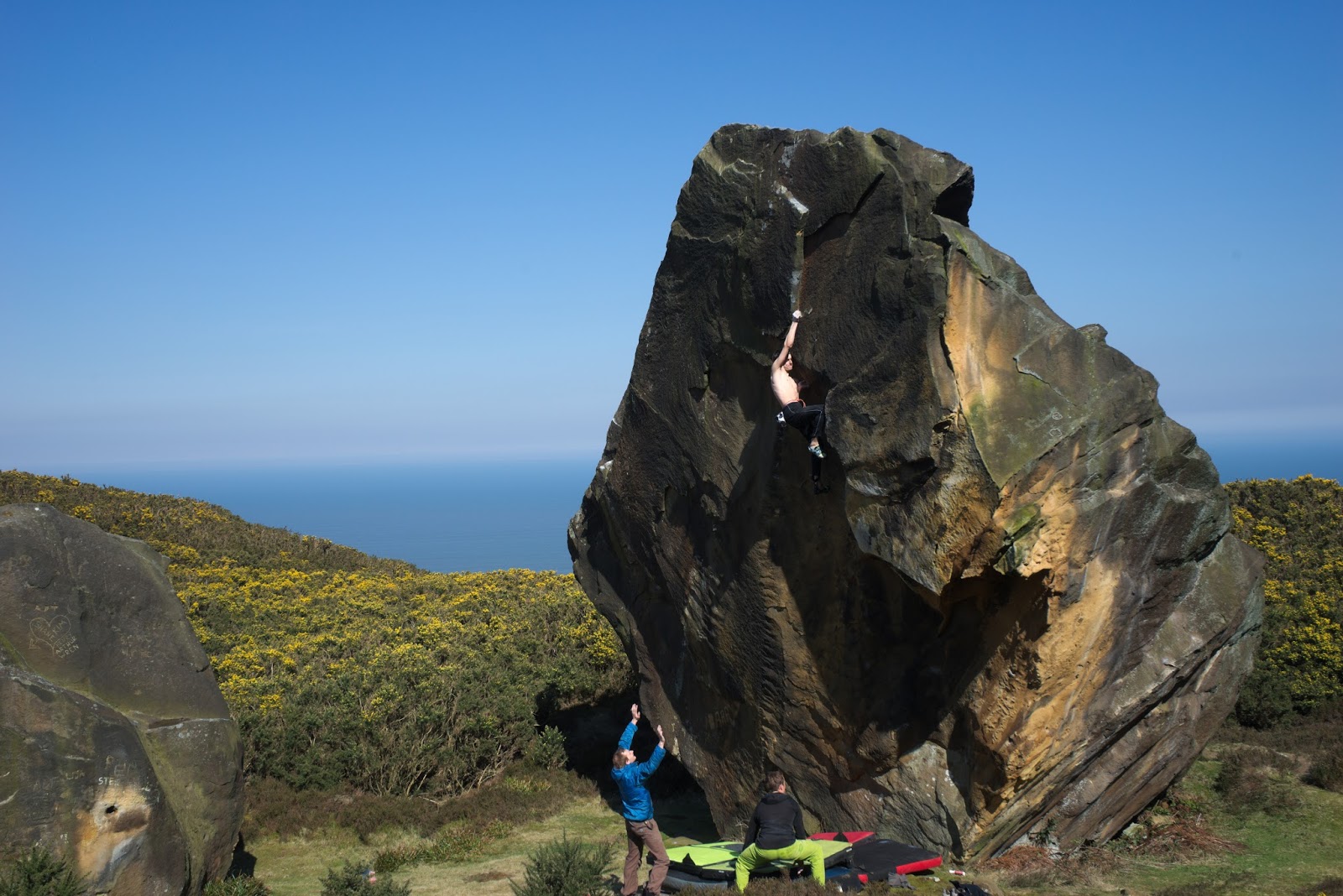 Save the odd reference here and there, the climbing on the North York Moors has traditionally been off-radar. However, one route most climbers should have heard about – assuming they’ve read Steve McClure’s autobiography Beyond Limits - is Nick Dixon’s 1982 route Magic in the Air (E5 6b) at Highcliffe. As Steve comments in Beyond Limits, Dixon’s Magic in the Air had previously hit the big time when it appeared at 81 of the 100 climbs featured in David Atchison-Jones 1993 book, Rock Climbing in Britain. At the time of the first ascent it was reckoned to be the hardest route on The Moors. Dixon used a side runner on the first ascent but that was eventually dispensed with by Francis Montague in 1991 bumping the grade up to E7.

Despite the seemingly rich pickings, The Moors have remained something of a backwater. However, maybe – just maybe – things are changing now that a number of dedicated climbers are beavering away pulling out all the stops to put the area on the map. Niall Grimes’s monster bouldering guide to Britain, Boulder Britain, hinted at the charms in the area but it was left to Lee Robinson to publish a comprehensive bouldering guide to the North York Moors last year. Sadly, a full-blown routes-and-all guide is long overdue and that surely would crank the spotlight up several notches.

Meanwhile life goes on and a group of activists– including Franco Cookson – have been busy on The Moors for some time. Cookson’s latest effort MYXOMOP is on the Barry Face at Stoupe Brow.  It’s an amazing line up the middle of one of the most impressive boulders in the country.  Cookson hasn’t  graded the line – “I'm not proposing any grade for it. It is what it is. I'm crap at bouldering and most things I think are hard turn out to be easy." However, Peak raider Tom Randall has been notching up some time in the area recently and has spent a bit of time on MYXOMOP and he’s pretty clear it’s not easy. Posting on FaceBook Randall said; “Amazing effort from Franco Cookson. One of the best lines I've tried and some very beefy climbing on it.... I spent a few sessions on it and was absolutely sure of it being around E9 7a or you could bracket it in that "highball but really don't fall off at the top!" category. If I'd done this, I would rank it in the top 5 things I'd have ever done on grit/sandstone.

Keen for some more beta, CLIMBER have fired a few questions over to Franco.

Great effort on MYXOMOP. First off, tell us what the climbing is like, just how high is it and how long you’ve been trying it?

It’s a left-facing undercut scoop system that then flips around at mid-height and climbs a higher flake. The climbing starts on big sandy undercuts (unusually soft for The Moors) and then turns into 3D fingery body contortion.  The two hardest moves revolve around chunky gastons, which feel rather improbable on first inspection!  It’s a monster when you’re stood under it. I wouldn’t want to risk a fall from above half-height.

Although we’ve wanted to try this thing ever since we first discovered the quarry in ’09, it took us about six years to figure out how to get a rope down it. I had one decent session on it a while ago, but then had other priorities. It wasn’t until I got a bit of a finger injury the other week (stopping me trying my main project at Sandy Crag) that I returned for another couple of hours. This coincided with a trip to The Moors with Tom. He served as quite a bit of inspiration on other routes in the area, with a ‘go for the link’ kind of attitude that gets a lot done. I’m very slow with my projects generally, wanting to get every little thing right, but with something safer like this, I just needed to be a bit more blasé.   Surprisingly I managed most of the moves in that one session: it was on!

How does MYXOMOP compare with other things you’ve done either on The Moors or elsewhere?

I think it’s right up there with the Hypocrisy of Moose (H8 6c), Sky Burial (H9 6b) and The Tormented Sole (H7 6b) in terms of quality. It’s a blisteringly pure line, albeit with sandy rock at the very start. In terms of difficulty, it’s similar to Fly Agaric (H8 7a) or perhaps Psykovsky’s Sequins with the gear (H8 7a). I can see it becoming a very popular highball similar to Cornelius (E8 6c). Stoupe Brow must be one of THE must-visit venues for aspiring highballers – with this, Chuckie Egg (font 7b) and Requiem (Font 8a).

What the heck does the name mean?

You say on your blog that the projects on The Moors are ‘open’ and the line has attracted a lot of interest. That must be both inspiring and nerve-wrecking at the same time? Did you feel you were in a race for the first ascent?

To be honest, yes. The idea of doing a first ascent on that boulder was definitely inspiring! On the other hand, you have to ask yourself why you want to do a line first; It’s kind of ego in its rawest form. I like to test myself to see just quite how pure my motivations are and that means encouraging other to try them. I’ve seen many of the great lines in the Moors climbed by other people, whilst I’ve been trying something else. This hurts! Well, kind of..  I’m really keen that the Moors doesn’t get the sniping and secrecy of other areas. Chuckie Egg is an example of this. That was a line I really wanted to climb, but in reality, it doesn’t matter whether Steve Ramsden climbs it first or someone else. The victory (the glory) is in the Moors becoming worked out and people (anyone) having wild experiences on them. The position the Moors is in at the moment gives us all a warm glow and there are still way more perfect lines left to do than have already been climbed – so no need for greediness!  Moreover, the more competition there is, the higher standards are raised. The Moors has far more potential for H10+ lines than any other place I’ve explored.

Now that MYXOMOP is done what are you going to look at next ? Maybe one of the other ‘king lines’ projects that you list on your blog?

Like I said, the main thing I’m working on at the moment is the arete at Sandy Crag. It’s a substantial step up in danger and difficulty. All my attentions are focused on this and I’m starting to be able to try this again now.

This little trip back to The Moors has of course made me miss the place. There are a good handful of lines that I’d love to climb one day. The wall to the left of MYXOMOP looks bigger and harder. There are then several unclimbed walls up on the quarry walls – some of which will be pretty hard. At the Maiden’s Bluff there’s a Font 8a highball slab (definitely harder than MYXOMOP), with some very cool moves on it that actually suit my climbing style. There are projects all over the shop: stuff at The Smuggler’s Terrace; things at Cringle Crag; Sky Burial direct; The Landslip Arete etc. etc.

How did you feel when Tom Randall came up to The Moors for a few sessions? Was he looking at projects or existing lines?

It was great. He came and ate a duck and tried some lines. He’s a very different style of climber to me and made some impressive links of stuff both climbed and unclimbed. I think it was great for Moors climbing and definitely for me. There’s the classic opposition between performance climbers going for it and the ponderous death-router. Mixing it up occasionally can yield some great results. Randall essence now hangs in the Moors air; It has a taste for him.

You’ve been plugging for some time up on The Moors. Can you share with us what the climbing is like?

It’s a bit weird. When I first moved to Northumberland I kind of thought, “oh, maybe The Moors crags are actually not that special”. Northumberland is fantastically wild. Furthermore, The Moors really suffers in that most of the easy routes are distinctly average and a lot of the crags are very difficult to negotiate. It was only after climbing in Northumberland for a while that I realised how good the rock quality is in The Moors (MXYOMOP apart) and that some of the lines in both places are world class. I really rate the highballs and harder routes of The Moors in particular.

And finally, what would you say are The Moors’ top five routes and top five boulders?

I’m not best placed to talk about the low-ball bouldering. I’d say Plastic Man & Archaeopteryx at Maiden’s Bluff are superb highballs. A reach too far at Tarn Hole is very good.  Grand Master Flash at Scugdale. Honey Arete at Round Crag.

There are loads of fantastic routes: West Sphinx Direct, The Tormented Sole, Mongol, Sky Burial, Warrior to name but a few.

Finally, Franco uploaded a short video featuring some of the activity on The Moors from  last summer – see below .  This gives a good insight to the harder/newer climbing on The Moors.