Franco Cookson has just completed Hakers Gonna Hake (E8 7a); yet another first ascent on his beloved North York Moors. 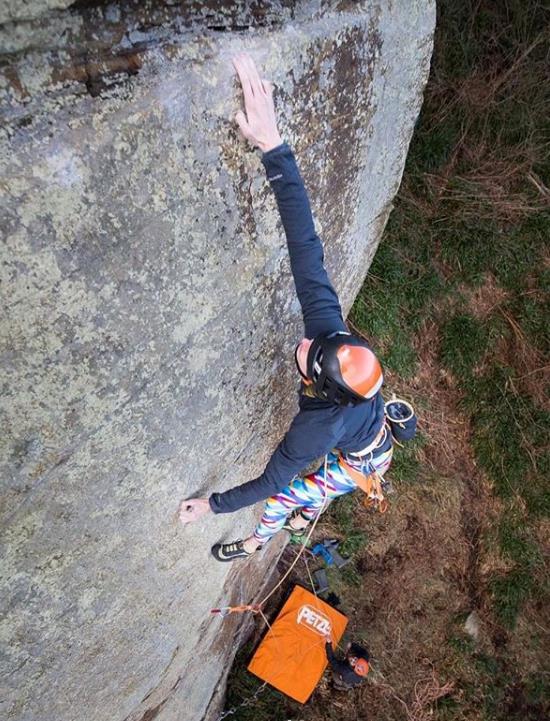 As usual the devil is in the detail and it’s clear that Hakers Gonna Hake has pushed Franco close to his limit; “I've been trying and failing on this line for what seems like an eternity” he wrote on Instagram. “It was the last project that remained at The Smugglers Terrace, after over 50 other new routes have been recorded there over the last 7 years. I've taken the fall from this position more than a dozen times, ripping gear, hitting the floor, just not daring to commit.” Watching the video Franco posted it’s hardly surprising that it has taken him a while to fully commit – the ground-sweeping falls look pretty hardcore!

Franco described the route – and the fall – for CLIMBER; “It’s a vertical wall with a slight overhang at the bottom, located at the Smuggler’s Terrace on the coast near Whitby, North York Moors. The meat of the climbing revolves around a powerful undercut move, followed by a really wild dyno off of a layback hold and a terrible smear. It’s of the modern ‘Ropeball’ style, where it’s too high and uneven in its landing to highball, but with just a rope on, you end up decking out. The rope takes the edge off the highball landing and the pad takes the edge off the groundfall. With a good belayer, it ends up feeling safe-ish, although you have that niggling doubt every go.”

CLIMBER asked Franco how long he’d been trying it, what connies have been like and what it’s like psyching up for taking repeated ground-falls; “I’ve had little goes on it for years, always on a shunt and always thinking the dyno move was too ridiculous to do so far above those tricams. You do your rope calculations and realise that you’re going to hit the floor, so getting to the point where you’re willing to go for it is quite a big stage. I tried it at the start of the year on the lead when it was too cold, but that allowed me to build up to taking the fall and get some trust in the weird protection. I’m not sure I could have got to that point a few years ago. I then had another go later in the year when it was too hot to pull on the holds. It’s a big drive from Northumberland, where I’m living, back to the Yorkshire Coast, so it started to feel like I was never going to manage it.”

Having fallen off the route a lot, Franco’s final attempt the other evening was special though. “On the final go” he wrote, “I managed to finally get myself in the right headspace. For the first time since Nothing Lasts, I felt real passion, pleasure and love for a line. I knew that go that I stood a real chance of doing it.”

Franco explained his mode change for his ‘last go’; “Yeah, I mean there’s the right headspace that will allow you to lead routes that you know you can do – for example things you’ve linked on a top rope and that are within your abilities. I’ve got into that kind of headspace with the new routes at Spittal Crag, like Dolphin Wall (E8 6c). But to try really hard, as if you’re bouldering, in a position where you know you’re going to take a nasty fall requires a different kind of headspace. You need to have a kind of commitment to the route over all else. I’ve struggled getting back into that mentality recently, but I feel like this could be the start of a better approach to these lines. That high-end commitment is a very delicate thing.”

CLIMBER asked Franco how Hakers Gonna Hake compared to other NYM testpieces; “It’s a bit of a crap line. It’s not eliminate, but it climbs out of another route, does this new crux sequence, and then goes back into the route it climbed out of. The move is absolutely superb though, so if you can take pleasure from that, it starts to feel very good. The move is up there in terms of difficulty with other routes in the area, like Fly Agaric (E9 7a), Divine Moments of Truth (E9 6c), Pyskovky’s Sequins (E9 7a), Dance of the Trance (E8 7a) and The Futuristic Herring Gull Project (E8 7a), but probably not as hard as the move on The Aghori (E9 7a). On paper it’s serious, as you’re decking out off a 7a dyno, but somehow it feels friendly. To be honest I wanted to give it H7, but the arithmetic doesn’t really seem to work for that.”

Finally Franco explained how he felt now he’s completed Hakers Gonna Hake; “With each new NY Moor route I do these days I get a little pang of 'happy sadness'. Overjoyed to do the route, but sad that another venue is largely worked out..” Whether Smugglers Terrace is really worked out we’ll have to wait and see…