In what are reported as ‘slightly doggie conditions’, Sam Harvie completed a rare solo of The End of The Affair (E8 6c) over the weekend.

The End of The Affair, first climbed back in 1986 by Johnny Dawes, has long occupied a prominent position at the centre of Peak Grit. Johnny Dawes first attempted the line on-sight but stalled at the crux and reversed down some way before falling off only to be saved by his belayer jumping off the ledge and taking slack in! The cams in the horizontal break at c.15 foot saved the day. Of course Johnny succeeded on subsequent attempts and The End of The Affair was cast into history. Repeatedly since, The End of The Affair has drawn folks in like a fabled siren.

For anyone not familiar with the route, the crux of The End of The Affair comprises hard and insecure moves at around 30/35 feet whilst looking at a ground fall. The fall has been tested more than once – most recently by Andrie Hedger who walked away (just) after face-planting into pads.

The Naughties saw most of the significant ‘other’ ascents being done; Lisa Rand did the first female ascent in Oct 2004, Ben Heason and Ben Bransby both climbed it solo (after working) around that time and then Ryan Pasquill did the first flashed ascent in Feb 2006. James Pearson is credited with the first on-sight ascent around late 2008. Team America speed by in November 2008 as well with Alex Honnold nabbing a flashed ascent after Matt Segal and Kevin Jorgeson both scored headpoint ascents. 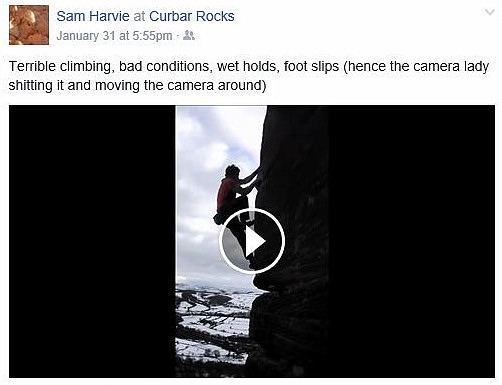 Many people seem drawn to The End of The Affair, doubtless its king-line appearance being the big attraction. It appears that Sam Harvie was the latest to hear the siren-call from Dawes’s classic – although his solo didn’t quite go as smooth as he would have liked perhaps as his comments on his FB page suggest…