Emma Flaherty is the latest Back Street Mine Artist

Emma Flaherty became the latest to nab a coveted  ascent of the emerging grit shuffling classic that is the Back Street Mime Artist (Font 8a) at Burbage North. 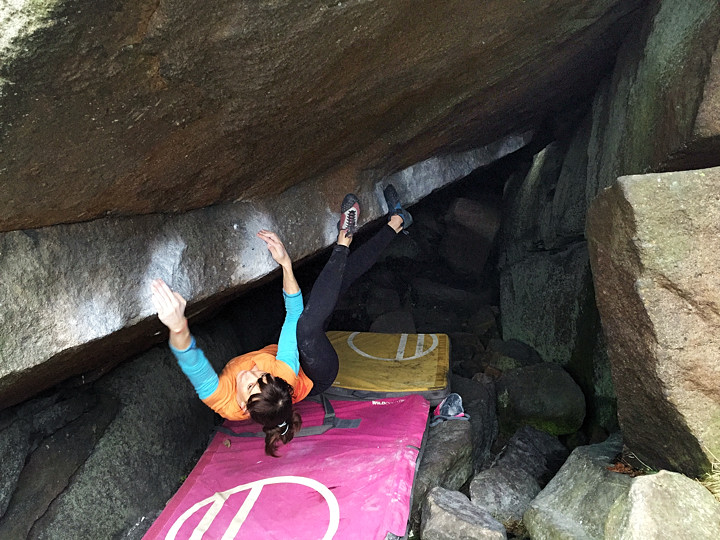 First, some background to Back Street Mime Artist which is rapidly becoming something of a classic bloc at the age-old venue of Burbage North. Shockingly, it was only ‘discovered’ and climbed relatively recently by Iain Farrar. Literally, thousands of boulderers have marched past that area of the crag secure in the knowledge that there was nothing there worth looking at. WRONG! The pile of boulders in that area of Burbage North actually forms amazing cave – although word on the street is that it was chocked with a few boulders which were removed to facilitate the climbing.

So, whats BSMA like then? Basically, it’s err… a route, in a cave. Much of BSMA involves actually climbing along a hanging and super-sloping trav line on the overhanging side of the boulder. It’s super slopey, super techie and involves masses of body tension and flexibility like many other grit traverses. Don’t expect to rock up and thug it – it requires finesse and – not putting too fine a point on it – climbing aptitude and ability. In short, it’s a climbers’ climb!

Sure BSMA is on a boulder and it gets a bouldering grade but it’s maybe best thought of as a route. Certainly when you’re finishing the 18/20 odd moves along its length it feels more like a route than a typical boulder problem. The start is tricky – maybe Font 7b/+ in its own right – but that leads without any rest straight into the second half which is really techie and tenuous and probably Font 7c on its own. All-in, BSMA gets Font 8a but many think route 8b is a better way of describing it.

Anyways Emma Flaherty, who has been putting the time into BSMA over the winter, was rewarded by the link earlier in this spring. She got the second female ascent after Jo Allen put BSMA away previously. Watching Emma on BSMA was little short of inspirational; super slick and efficient – definitely power with grace.

Emma by the way has just been appointed to the role of Vice President of the BMC and is a co-director – alongside Shauna Coxsey – of the Women’s Climbing Symposium.