Ella Russell gets a PB down-under 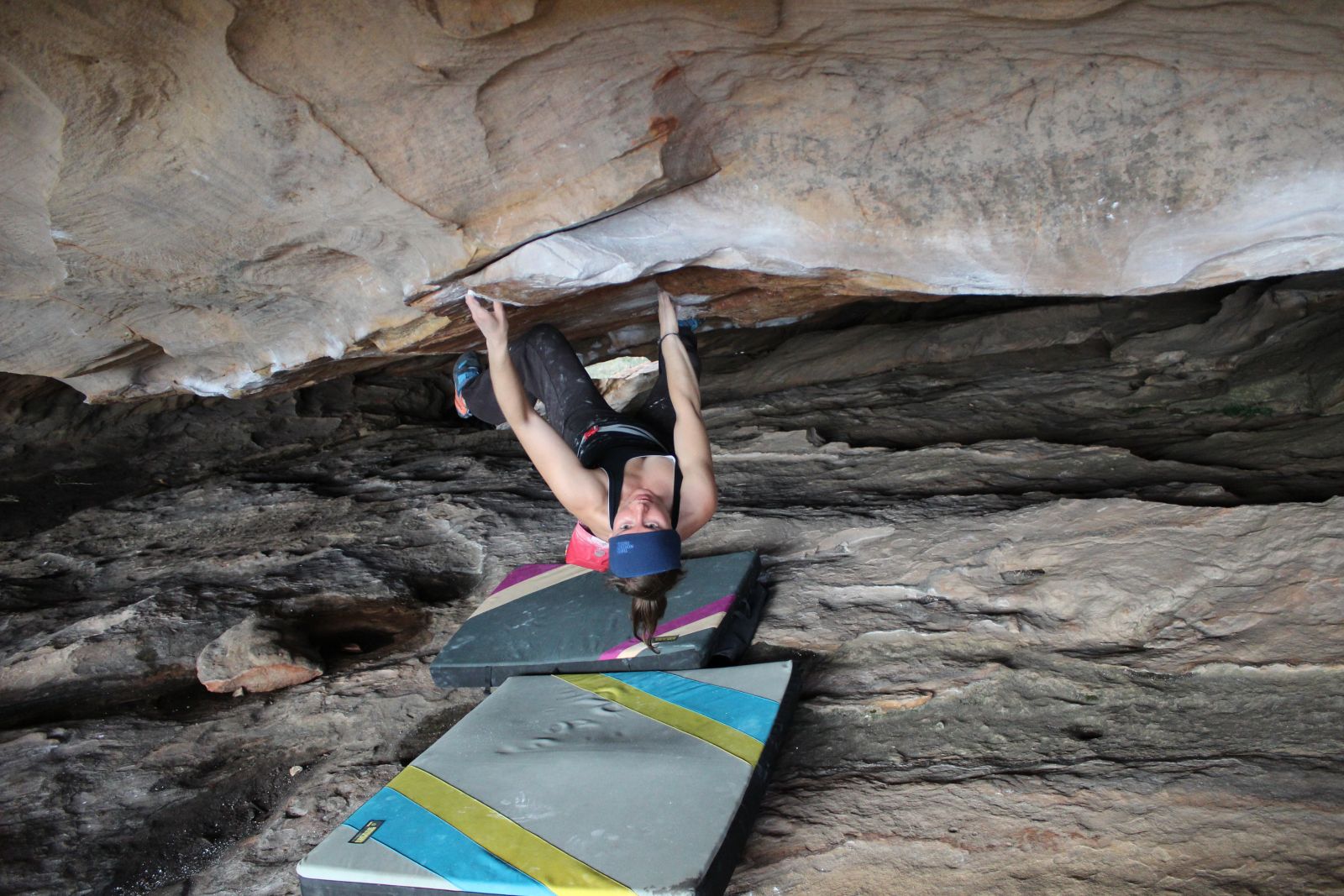 Sleepy Hollow is Ella’s hardest bloc to date. Originally climbed by Fred Nicole, Sleepy Hollow is not only a well-known bloc in its own right but it’s part of the super-long Wheel of Life (Font 8c). Travelling and climbing with her boyfriend, Alex Barrows, Ella’s original game plan was to tick routes but a finger injury meant she had to re-set her objectives.

CLIMBER have been in touch with Ella to get the low-down on her time down-under, her ascent of Sleepy Hollow and her onward plans.

You've just left Oz having finished the first leg of your trip. Did it take a while to settle into the groove of full time climber living out of a van?

This was the first time that I'd spent longer than 2 weeks in a van so it definitely took some getting used to!

I was surprised at how long just 'living' took out of each day. We only had a small van so we had to follow a set routine every day of putting the bed away, unpacking the pads from the tarp and then fitting them and the other camping shizzle in the van, before repeating everything in reverse every evening (which was a bit grim in the many days of wet weather we had out there!).

I also naïvely assumed that we'd have loads of time in the evenings and on rest days, but the reality was that there was always something which needed doing (showers/laundrette/shopping/emails etc). Despite the lack of 'free time', van life was fun when you embraced it! Kipping in the van gave us lots of freedom and we saw some impressive wildlife - kangaroos and wallabies, emus, kookaburras were standard around our van!

Can you tell us where you went in Oz and what your objectives were.

We started off in the Grampians, about 4 hours north of Melbourne and had intended to spend a couple of months there and then move to the Blue Mountains for the last month or so.

My objectives were to focus on the routes in Oz and get stuck in the amazing Taipan Wall! The route I most wanted to do was Serpentine, which is an awesome french 8a (albeit on mixed gear of bolts, cams, and in-situ wires so it's not really a sport route as you and I would know it!). I had a couple of sessions on it early on in the trip and was making good progress until I injured my right hand index finger from one of the super crimpy boulder cruxes. At the time this totally sucked and Alex did his best to keep me out of the pit of despair I wanted to crawl in to; I had effectively just begun an 8 month career break to climb full time and I was injured!

Immediately after the injury I realised that the vertical crimpy routes in Oz weren't going to provide a decent rehab platform for my finger, so I decided to focus on steep boulders with big holds. I figured that at least I could work on two other weaknesses of mine, big shouldery moves.

In the end, I spent most of the remainder of the trip dwelling in caves and roofs in the Grampians, and my finger is now fixed and crimping again which I'm really pleased about!

Might you go back for Serpentine in the future?

Although I didn't climb it, Serpentine would definitely be my stand out route, such a proud and inspiring line! If I go back to Oz, I’ll definitely focus on routes.

So, you switched to bouldering on 'bigger holds'. How did that go?

This worked out pretty well in the end as I was able to climb my hardest boulder yet! I spent quite a bit of time in the Cave of Man Hands and Hollow Mountain Cave, which provided the perfect rehab ground for my finger. I still had a few sessions which set my finger back because I have a habit of being impatient and I pushed it too hard too quick!

In focussing on steep burl I have made gains on big basic moves between good holds. Given my background of tic tacking my way up local limestone boulders, this has been a valuable learning experience for me.

Just before you left you did Sleepy Hollow - your first V12. Can you tell us about that please;  was it 'your style' and how you found it?

I was soooo pleased to send this on my last full day of climbing out there. I hadn't intended to get on anything that hard, but because Alex was trying the Wheel of Life, and I had already climbed my proj in the cave he suggested that I might want to try the moves on Sleepy Hollow.

Sleepy Hollow is a Fred Nicole problem and forms the second part of the Wheel of Life. For me, it's a 27 move roof problem broken up by a double knee bar rest (thanks to Alex for finding this!) about a third of the way in. The crux is an awkward match on a rail in the last third which took me quite a long time to get through in isolation. Even once I got through this on link, I must have fallen off the relatively easy end section at least eight times before I finally did it!

I'm not sure whether this boulder was my style or not. I definitely enjoyed working the moves, but it highlighted a big area I need to improve upon, which is my ability to climb precisely and fight when fatigued. I'll be focussing on this more for the rest of the trip and when we're back home.

How does it compare with stuff you've done in the UK?

Totally different! There just aren't boulders like this in the UK! I definitely got an education in toe hooks, heels and knee bars in the Grampians. For example, there were four left heel/heel-toe locks on Sleepy Hollow and I had a very sore knee by the end of the trip.

Let’s talk about the next leg of your trip. Are you heading straight to the bouldering hotspots now you've arrived in South Africa or are you hoping you can get back on routes?

Unfortunately, Alex and I were in a car crash in our first week out here and I was admitted to hospital for a night because I was knocked unconscious during the crash and lost my some of my memory for a short time which was pretty scary. We both had whiplash too but we're on the mend and back to climbing now so we’re thankful that it wasn't worse.

We're spending a couple more weeks in Rocklands bouldering, and then heading to a limestone tufa crag called Oudtshoorn for the last couple of weeks in South Africa. This is basically going to be an endurance boot camp for me as I haven't been on a route for ages! We then go to the US for 2.5 months where we'll be predominantly sport climbing at Rifle and Red River.

We believe that you’ve traded-up on a van now you’re in SA?

Yes - we're in a cottage in South Africa and I am definitely appreciating the convenience of a kettle, and a dry indoor space to stretch!

Finally, we have to ask - how's your mascot bearing up to the trip?

Still intact! Koalie is a little bear mascot for our trip and I dropped him in a car park before our trip and he was decapitated by another car! He now has a safety pin to keep his head stuck on and he still gets forgotten or dropped occasionally, but somehow he's stuck with us and he hasn't suffered any further traumas yet!

Thanks to Ella for the update and to her/Alex Barrows for the photos.