Switching to limestone for the summer season David Mason has recently repeated Dandelion Mind (Font 8b/+) at Badger Cove in the Peak District. 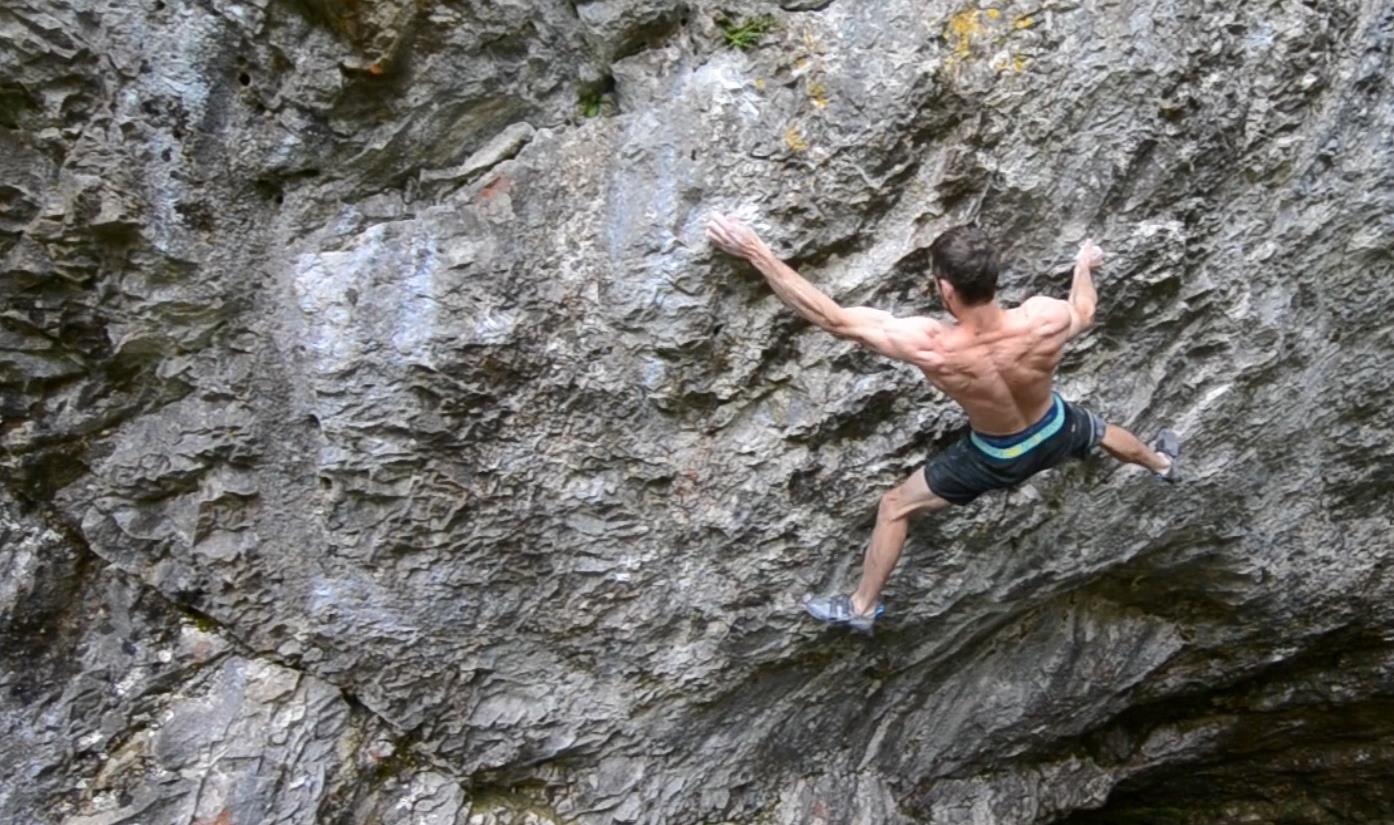 Sheffield-based David Mason is absolute no stranger to hard bouldering so when he posted that he’d repeated Dandelion Mind (Font 8b/+) at Badger’s Cove in the Peak we had to get in touch for the beta.

Let’s not beat about the bush on this, let’s dive in and talk grades. Anyone with the definitive BMC guide to hand might be wondering about the grade; we were and we thought it was Font 8b+ so obviously we had to ask David where his Font 8b/+ slash grade come from? Was he, for example, sneaking a down-grade in to keep the grades in the Peak tough? ‘Dan originally gave it 8B+ but said it was low end, especially in comparison to Bewilderness. Ethan, I think, came up with a little bit of foot beta, which was much simpler than what Dan did. James Noble who was trying it at the time thought it made a substantial difference to the difficulty. Since then I think most people have used this beta and a consensus of 8B has been established, although I gave it a slash because I thought it felt 8B+. Nathan actually did it with the original beta as it was the only method that worked for him. It took me 6 sessions this year with the odd tickle in the past. It definitely felt tough but conditions weren’t ideal and the climbing doesn’t suit me that much.’

Had David done Bewilderness and if so how did that compare? ‘Yeah I did this in 2016, the third ascent after Varian and Dan Turner. For me this felt easier than Dandelion but I know both Dan’s found it more difficult. Whatever the grades both problems are pretty tough and require a lot of pull in the fingers. One of the main reasons I liked Dandelion was because it felt like such good training, I am not sure I have pulled much harder in my life!’

Having had a winter on the grit and sandstone how much of a transition to the lime was it? ‘I actually don’t feel like I climbed outside much this winter but I had some lovely days in Northumberland in the Spring. The lime is totally different, it's much more dependent on finger strength and raw, basic pulling. There tends to be much fewer tricks to help you get to the top. I tend to struggle a bit on lime as my skin doesn’t like the heat that accompanies the season or the size of the holds but the struggle is actually one of the reasons why I enjoy climbing on it.’

David posted that he felt Dandelion Mind was ‘a great combo of fingers and tension with subtle body positioning’. That sounded interesting so we asked David for a bit more detail: ‘That should probably be the other way round actually. After a few easier moves there is a finicky knee bar/scum that allows you to get into the meat of the problem. In the past I have never got this knee to work but this year I managed to work it out in my first session, occasionally it would pop but mostly I managed to master it, something I was really proud of, as technique isn’t a speciality of mine! The knee is strange because it feels like it’s falling out but you just have to trust it. Once you’ve reached the next hold the pulling begins. A high left foot to unwind out of the knee and then a slap out left, more tension dependent foot moves and another slap left handed. These few moves don’t take long but require so much effort from the fingers, core and lower back, I felt like I was going to explode most of the time. However, it all comes back to the knee, if you get the right hand side pull wrong, every move becomes exponentially more difficult.’

Watching the video David’s actual send go looks like it went well thankfully as he’d taken some pretty gnarly looking backwards flips off it. ‘Haha I actually only had a couple of back splats; you’re pulling so hard it squeezes the juice out of your tips so it’s bound to happen. I mainly went on my own so it never entered my mind really, I just focussed on trying flipping hard! The most devastating thing was feeling really strong a few goes before actually doing it but, unfortunately, feeling so strong that I missed the penultimate hold! Doh!’

Finally then, we asked David to rate Dandelion Mind in terms of its difficulty; ‘As with most hard projects they seem nails when you’re in the midst of battle. I did the moves on my first session on it this year and I made progress every session, even if it was only minute most of the time. Having said that, it felt really hard to me and I feel in reasonable shape at the moment too. I would definitely put it in the top 3 of my hardest boulders but who knows, insert arms in the air emoji. Above all else I was really proud of my head game and tactics on this climb. I enjoyed every minute of the process, from figuring out the intricacies of the moves, to visualising a successful attempt on rest days, the nervous butterflies before I pulled on and especially the effort I needed to put in when I did pull on. The day before sending I drove out to Badger, walked in, pulled on, fluffed after the crux and split in the process, normally this would result in a tirade of expletives but I just laughed it off, packed my things up and went home. The next day I felt good warming up, and with tape on I managed to climb to the top, even after fluffing the top another time!’

And then same question re quality? ‘Quality wise it’s a great climb, the three main lines at Badger Cove are all really good. They're definitely the best on Peak lime, along with Sean’s Roof and the sit start, and yes I realise this doesn’t say much! The limestone in the Cove is solid and has crafted some holds that are made to be climbed on, the movement is interesting and requires thought and technique, not just brute force, although you need this in abundance, and to cap it all off there’s a jug rumble to finish at a good height. Like I say as Peak lime bouldering goes Badger is the cherry on top!’

So what’s keeping David busy now the rains have come? ‘I have been training a bit on the board and doing some basic conditioning but still trying to get out whenever I can. For me moving well and the practise of good tactics and taming of the head are the most important attributes. I also just love being outside, this leads to higher motivation and trying harder than I find possible indoors.’

Watch David sending Dandelion Mind in his video below. You can also see more of David’s videos here…

Here's the video of David on Bewilderness (Font 8b+) as well...

Bewilderness (8B+) - Badger Cove from David Mason on Vimeo.