The latest word coming out from the US is that Daniel Woods has just sent the Bishop project at a suspected grade of V16/Font 8c+. 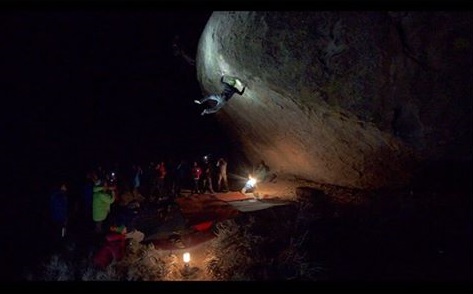 The news, which comes just days after Tommy Caldwell and Kevin Jorgeson topped out on Dawn Wall shows that Team US is alive and kicking. The project is on the Grandpa Peabody boulder and its been a longstanding and much sought after line. It begins by climbing Matt Birch's bloc, Blood Meridian which is V13/Font 8b in its own right. The project however was to continue to the top of the bloc. Woods has been trying the project for some time but the hard and dynamic moves some 20 feet above the ground had proved too hard until Woods pushed through on his successful ascent. The maths are understood to break down into V13/Font 8b into a V14/Font 8b+ and then finally a highball V10/Font 7c+

Woods hasn’t been alone in trying the project which has seen consideration attention from a number of other strong contenders including Dan Beall who is seen below the bloc in the image below.

Both Woods and Beall had been climbing at night when conditions were better as the face of Peabdy is in the sun all day. Woods hasnt offered a grade as yet althought it's long been speculated that the whole link-up would be worth V16/Font 8c+. Climbingnarc reports that Woods has called the line, The Process.