Alexis Perry has snaffled some serious Cornish cream this winter making a rare repeat of Question Mark (E9 6c) at Cribba Head in early February and then doing the first ascent of Exclamation Mark (E9 6c) a month later. 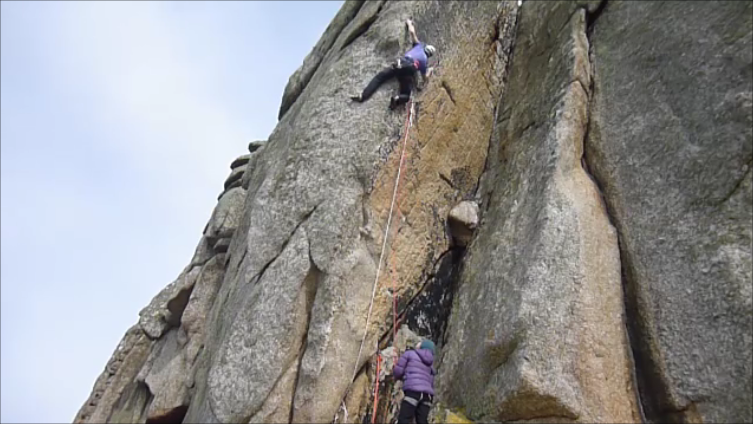 Alexis’s repeat of Question Mark is believed to be the third ascent after Mark Edwards‘s first ascent way back in 1994. The only other known repeat came around 2000 at the hands of South-West guru, Ken Palmer. Having knocked-off Question Mark in February, Alexis went back for more excitement in March when he did the first ascent of Exclamation Mark – a direct on Question Mark.

Both are significant achievements and CLIMBER has been in touch with Alexis for the low down. 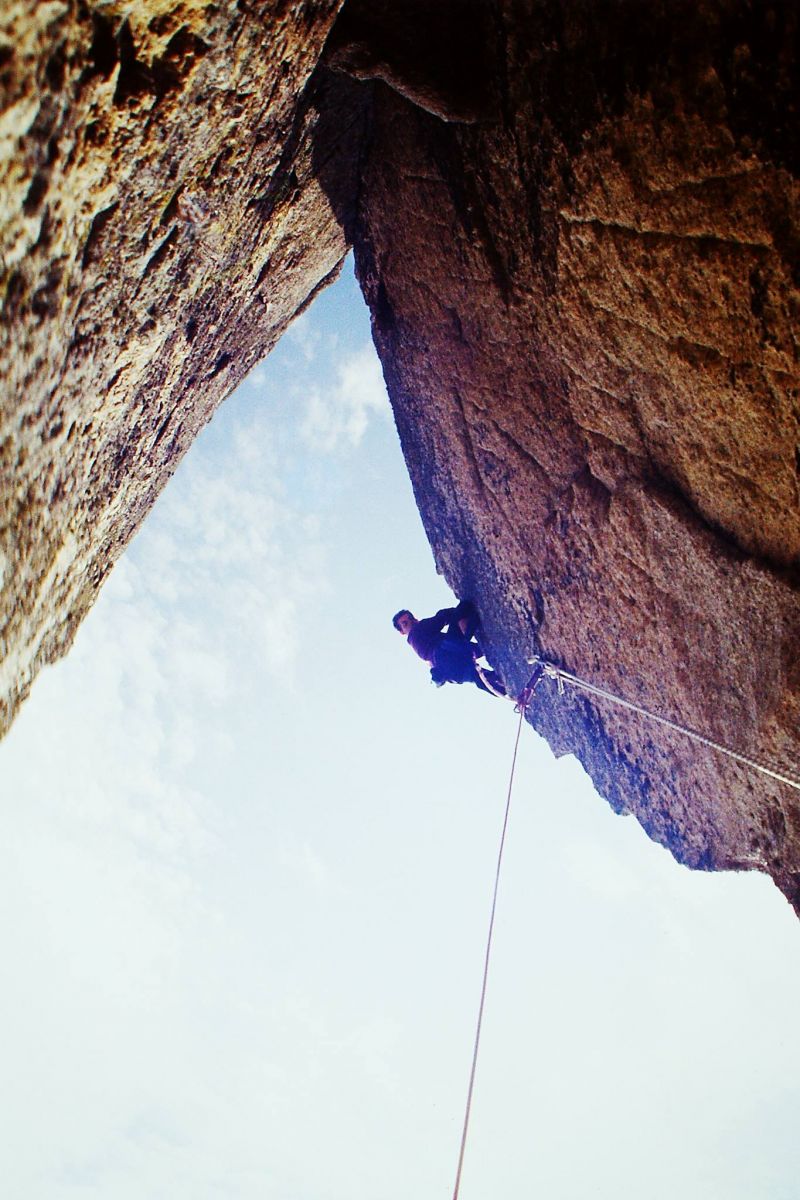 Mark Edwards on the first ascent of Question Mark in 1994. Photo Rowland Edwards.

First however, let’s set the scene a little. The Edwards’s new routes are inextricably woven into the fabric of UK climbing. Rowland pioneered many first ascents in North Wales before moving south to Cornwall to run Compass West. Based at Sennen Cove, Rowland and Mark, began developing routes in the area. At the time that sport climbing was being developed across the country the Edwards ‘experimented’ with bolting on the Cornish cliff. However, many in the local climbing community weren’t comfortable with bolted routes on Cornish sea-cliffs and the bolts/drilled gear was removed. Mark however also threw plenty of effort at the trad possibilities in the area putting up a considerable number of very hard and serious routes – many of which have seen little attention. Question Mark dates from that period.

Finally, let’s fast forward to the present and Alexis Perry. Exeter-based Alexis had a very respectable tick-list in 2015 starting with Tuppence (F8b) at Anstey’s Cove in May which he followed with Patpence Ha’penny (F8b) in July, A Fisherman’s Tale (F8b) in early October and then finally, Tuppence Ha’penny (F8b+) later in October. Here then, is a short Q&A with Alexis:

Great effort doing Question Mark - such a hard/bold route in Feb. Had you been trying it before and/or waiting for good conditions?

First tried it on toprope a few years back but it seemed too hard. Got on it in spring 2013 and just about sorted out a sequence but couldn't link it. Went back this winter as a bit of an afterthought having been rained off elsewhere and found I could do it - I could link the whole lot fairly reliably. Took a bit of time to accept the psychological aspects of leading it - to give myself permission to be high on the arete above the skyhook - then it was a waiting game with conditions. Thankfully, I didn't have to wait too long; I found that being psyched up and ready to get on it was not a state of mind that fitted well with the demands of normal life!

A month later you did Exclamation Mark. Please can you tell us about that including how it varies from Question Mark and spill the beans on the grade – ie  if you think it's harder etc?

In a sense, Exclamation Mark is only a minor variation on the parent route, in that it only presents 5 m of new climbing and the crux is still the QM crux. On the other hand, it's very logical and more satisfying: the line is the arete throughout. The moves on the lower arete are really good - long and throwy - and not too hard (V4/5 maybe). Overall, it is a little harder than QM in that it adds an extra few more metres of overhanging climbing, hence when you reach the dangerous bit of QM you're that little bit more tired. It also adds a further logistical problem: after placing the hook, you want to reverse to the floor both to tie it down properly and to get a rest. Reversing a dirty great slap isn't so easy! It adds more in quality than it does in difficulty and I'm happier with it this way round.

It might be an outrageous onsight, but this arete is really not too bad for headpoints. It's surprisingly secure with a good sequence, and you can get through the dangerous bit so fast that you hardly know you're there.

Finally, my wife, Mandy was absolutely integral to these ascents. I simply could not have done them without her.

OK great, let’s broaden it out a bit and talk about some of the other hard routes in the area. Can you list some of the harder/stand-out routes you've done and say why they were memorable? 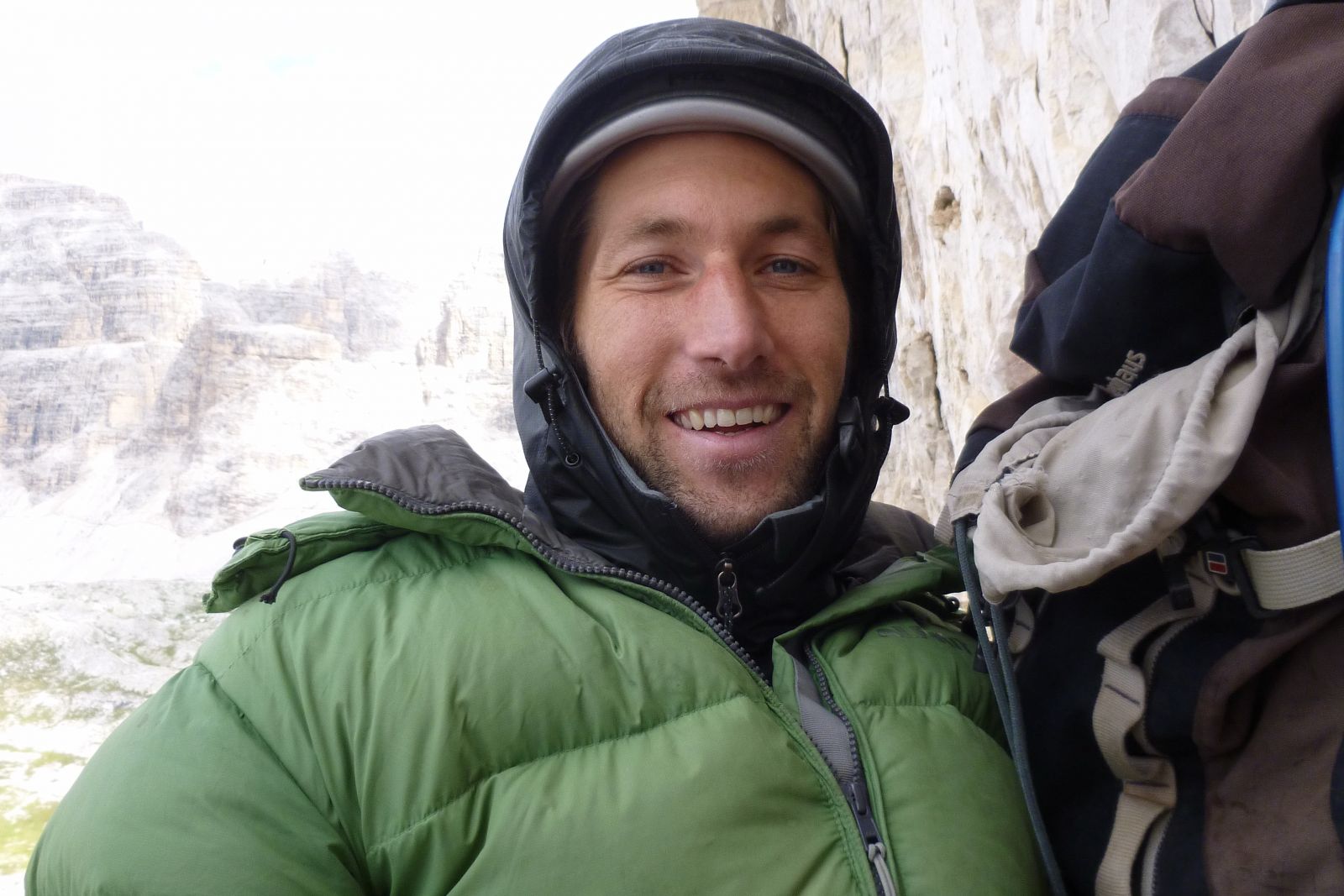 In terms of Cornish headpoints, I've done a few E7s and E8s. Stand-outs: Off the Mark at Robin's Rocks is just great - brilliant, hidden away route on an unassuming cliff; 7:27.13 at Carn Vellan is absolutely wild and was a big personal hurdle - I just couldn't believe I could get up it and kept failing on it; Tracks of my Tears is my favourite though, it's such beautiful route, so classy.

Many climbers have traditionally thought that Cornwall is a holiday destination place for the summer but with climbers such as yourself operating down there is there a bit of a scene developing all year round?

Not sure about a scene as such; just a few committed individuals. Even from Exeter, Cribba's a two and a half hour drive (not much closer than the Peak); there just isn't a density of climbers. As a misanthrope, I think that this is a very good thing! It's amazing down there in winter in any weather; the storms are epic and the cliffs are empty. Every visit to Cribba this year we saw loads of dolphins, seals and gannets; certainly more than we saw of other people.