Orrin Coley has added another testpiece to Forest Rock; Rise of Cthulhu (Font 8b+). 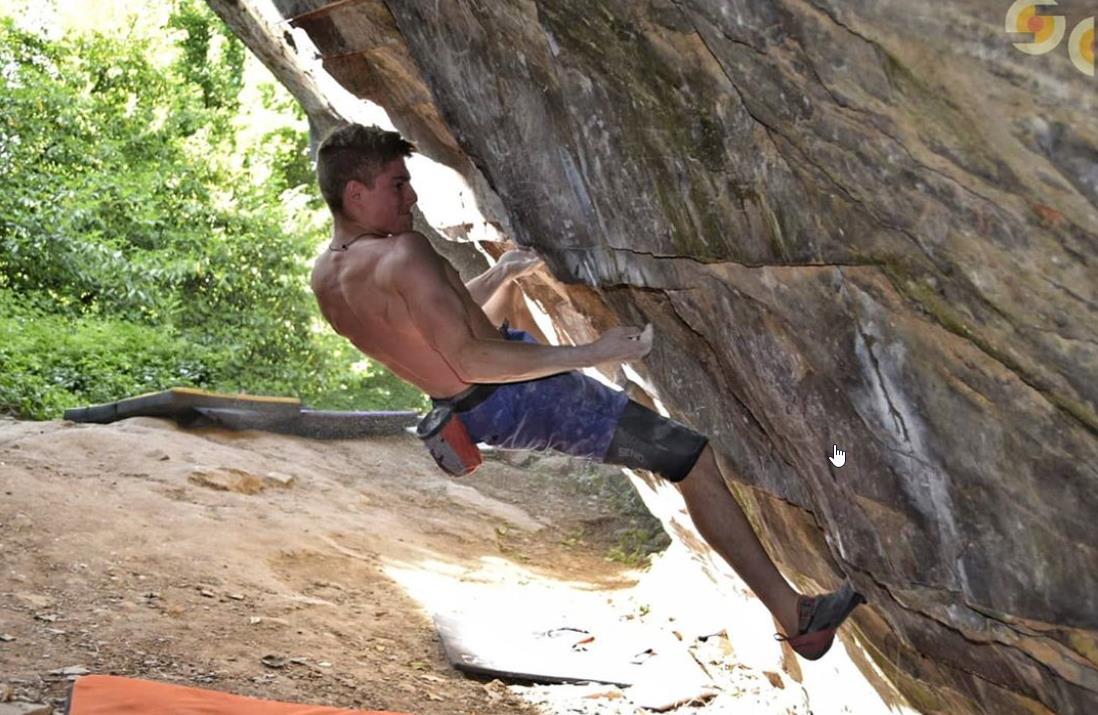 It’s just over a year since Orrin did the first ascent of Limit Breaker (Font 8b+) in the cave at Forest Rock. ‘No doubt the hardest thing I've ever done, by a reasonable margin in my eyes too’ was how Orrin summed that one up.

Since lockdown was eased Orrin got down to work repeating some of the classics in the cave to get his game back together. Six days ago he added Black Art Extension (Font 8a). Orrin explained the background to that: ‘A much talked about project in the cave. Turned out all it took to send was to actually put the time into figuring out beta and then trying it when fresh, not at the end of a 4-hour session... Very pleased about this one!’

It’s clear though that he had his eyes on a much bigger prize: ‘Also managed to repeat Ascension of Evil (Font 8b) while working a different link up proj.’ Fast forward to the middle of this week as the weather was breaking and Orin was clearly getting a tad nervous about conditions whilst working his latest project: ‘I felt tired and sore, but knew if I wanted to get it done my window of opportunity was closing. I woke up today, warmed up on my board and headed out, not optimistic that it'd even be dry. Luckily though it was dry, but today would likely be my last chance for a while so I got to work.’

First go he got a high point. Second go was another high point but although he stuck the last hard move he then dropped it readjusting it. With time and energy slipping away Orrin explain how his third go went: ‘About to set up for the final hard move when I realised how anxious I felt about it. Without thought, I took a deep breath, calmed down, eyed up the next hold and went all in. Seconds later I allowed the excitement to creep back in once I was back on the floor after a successful attempt.’

Fascinated by the utterly unpronounceable name Climber asked Orrin to explain where that comes from: ‘Haha I've had a few comments about that! Well, basically all the names there follow a trend about some sort of magic or something along those lines. But at this point, I'm kinda struggling for new names for the link ups and would rather not call it "Witch Hunt I to Witchcraft into Black Art". So I just spent a while thinking of weird, funky names and the idea of Cthulhu came after watching a South Park episode! However they didn't invent it, the name and character Cthulhu comes from a series of books from the 1920s by H.P. Lovecraft, it’s basically this evil cosmic entity that lays dormant under the Pacific Ocean.’

Orrin told Climber how he’d prepared for Rise of Cthulhu. ‘I'd worked on my endurance specifically for this, I've wanted to complete for a while now and it seemed an appropriate time to get to it with nothing else going on! However now that I've gotten a bit fitter I might see if I can put it to good use on other longer problems, maybe a route too. We'll see I guess! It was funny working this because it's an extension to an existing link I did in 2018 called Ascension of Evil (Font 8b), which already was one of the longest link ups there and felt like the living end when I first did it. It took several sessions just to get fit enough to repeat that. But the thing with endurance is you notice the gains quickly, so within a couple weeks I went from not being able to repeat the Font 8b to running laps on it consistently.’

For anyone planning a visit to Forest Rock access is a sensitive issue as Orrin says: 'it's worth mentioning that access is, as always, sensitive here so please check out Leicestershire Climbs Facebook page for important info on the matter before considering a visit.'