Around 350 competitors from across the globe converged on the Climbing Works over the weekend for the 9th International Festival; a festival that saw two of the world’s best boulderers – Shauna Coxsey and Alex Megos performing on what can only be described as ‘ another level’ to take the two titles. In Shauna's case, this was her fourth straight win at CWIF. 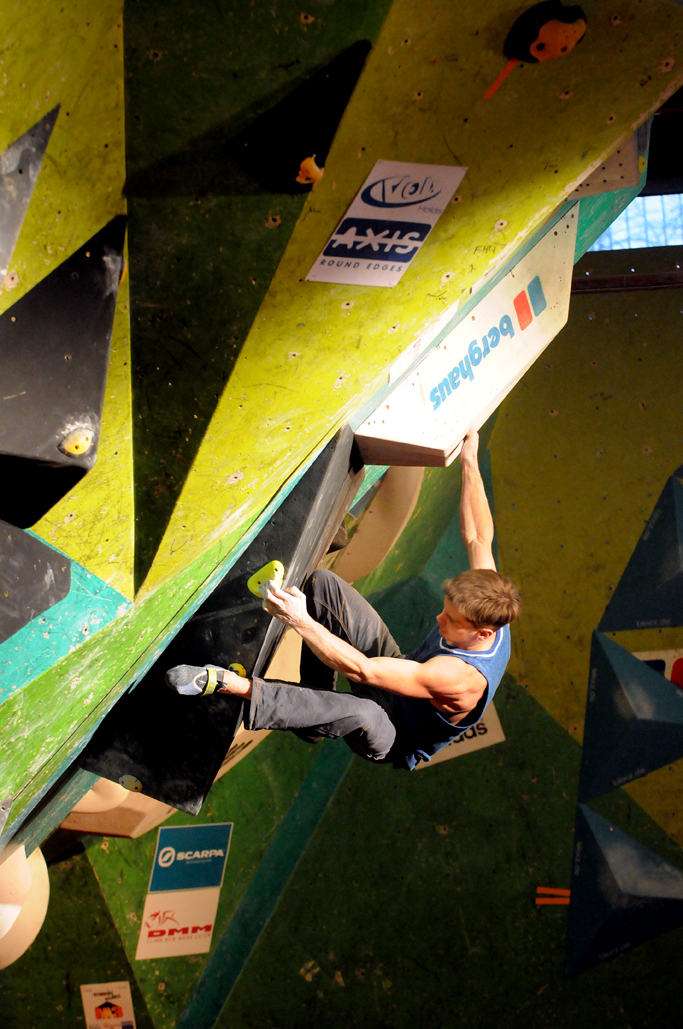 Dave “The Tank” Barrans (as he became known over the CWIF) in the finals. Photo Ian Smith

Saturday’s qualification round was about eliminating all but the best 40 competitors thereby leaving 20 each in the men’s and women’s streams to go forward to the semi’s on Sunday. A massive 245 competitors were in the men’s stream - whilst the women’s event saw 100 roll over the starting line-up. The men’s point’s table was very tight at the top end with the first three competitors all sharing the same number of points – the only differentiators being the bonus points. Dave Barrans finished in first place with Ned ‘just back from Font’ Feehally hot on his tail sharing the same points and bonuses as Rolands Rugens. Thomas Caleyron, CWIF 2014 winner finished in fourth place and a little surprisingly perhaps, Alex Megos qualified in seventh place – comfortably above the cut-off however. Whether this was a deliberate ploy by Megos to ‘keep the opposition guessing’ we’ll never know but he obviously felt he had plenty left in the tank as he high-tailed it out to Stanage Plantation for an outdoor session in the afternoon during which he flashed Deliverance (Font 7b+) – the perfect way to way-down maybe, assuming you’re on of the best climbers in the world! The women’s wasn’t so tightly packed but it was little surprise to anyone that Shauna Coxey topped the table with Chloe Caulier and Leah Crane finishing in second and third respectively. Emma Twyford and Diane Merrick finished in 4th and 10th places. Sadly however, both Tyler Landman and Michaela Tracy both retired injured. 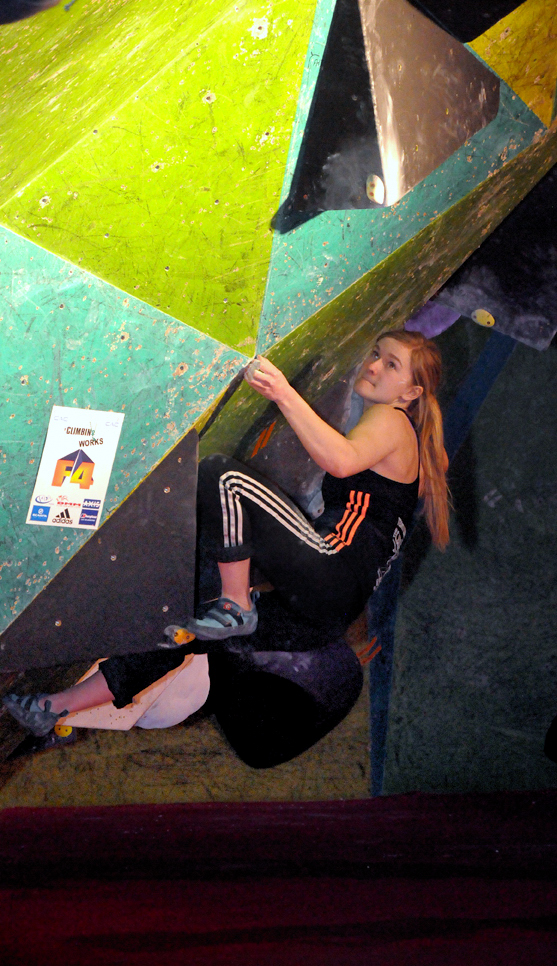 Sunday’s Semis brutally reduced the field to just six men and six women ahead of the finals. It was all change in the men’s stream with Rolands Rugen, Thomas Caleyron and Alex Megos taking the top three slots with Ben West and Dave Barrans in 5th and 6th place respectively. Shauna Coxsey stayed out in front in the women’s stream with Chloe Caulier and Leah Crane in 2nd and 3rd. Diane Merrick took 6th place.

The finals kicked off at 18:00 and what a final it was as well! Four problems apiece for the mens and womens had been set by Percy Bishton and the setting crew. By now Alex Megos had built up a head of stream and looked unstoppable as proved to be the case when he returned a perfect scorecard; four tops in four attempts. It clearly doesn’t get any better than that! Dave Barrans, recovering his composure and crush after (in his words) “a gruelling semi” when he fought like a beast to gain four tops in ten attempts and so pull a well-deserved second place edging out Thomas Caleyron last year’s winner who scored three tops in three goes but failed to make any impression on the fourth bloc. For a while it looked as though Shauna Coxsey was going to replicate Megos’s form and pull four tops in four goes. However, to everyone’s amazement and her amusement, Shauna took two attempts to succeed on the heinous volumes that the setters had constructed bloc 3 from. That no other women topped this is testament to Shauna’s climbing ability. Clementine Kaiser placed second with local Diane Merrick pulling third place and hence just edging Leah Crane, ex of the Sheffield Parish, out of the medals and into fourth place. 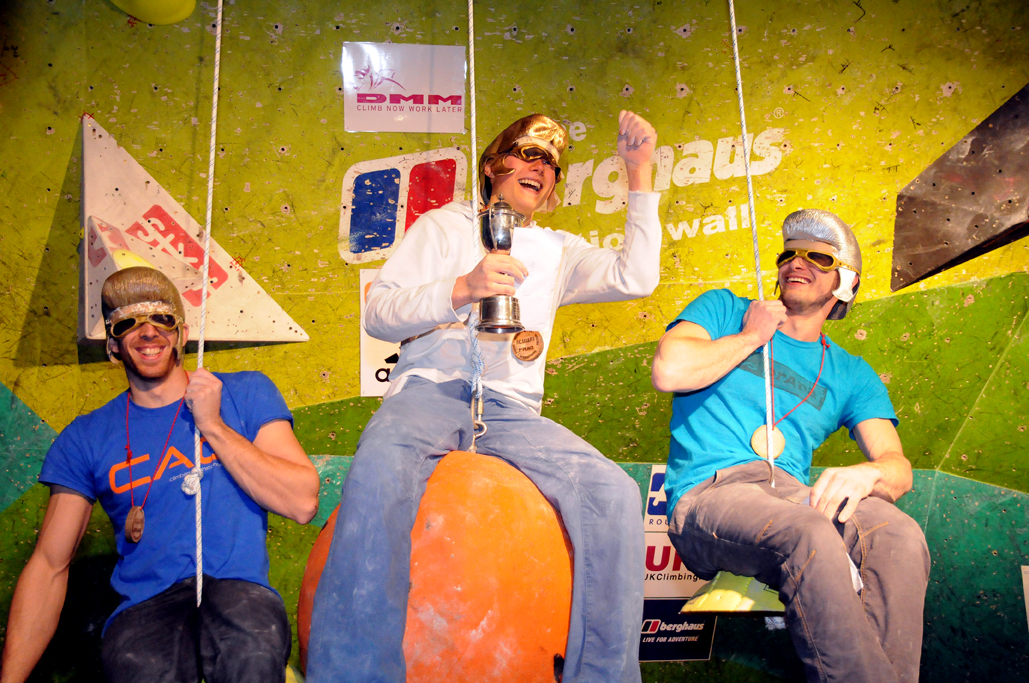 The medal ceremony was, in true CWIF style, a totally different affair to normal. Volumes – hanging from the ceiling – were duly lowered and the medal winners faced their final hurdle – that of mounting their respective volumes – failure, of course, meaning abject humility in front of the packed house. Fortunately that unfortunate eventuality befell no-one as they all mounted their respective volumes with the aplomb that you’d expect from such esteemed blocmiesters. Actually, it wasn’t quite the final hurdle – that was in fact dipping their respective heads in turn so that Elvis – yes, that’s correct, Elvis Presley could present each podium place with a suitably coloured CWIF. 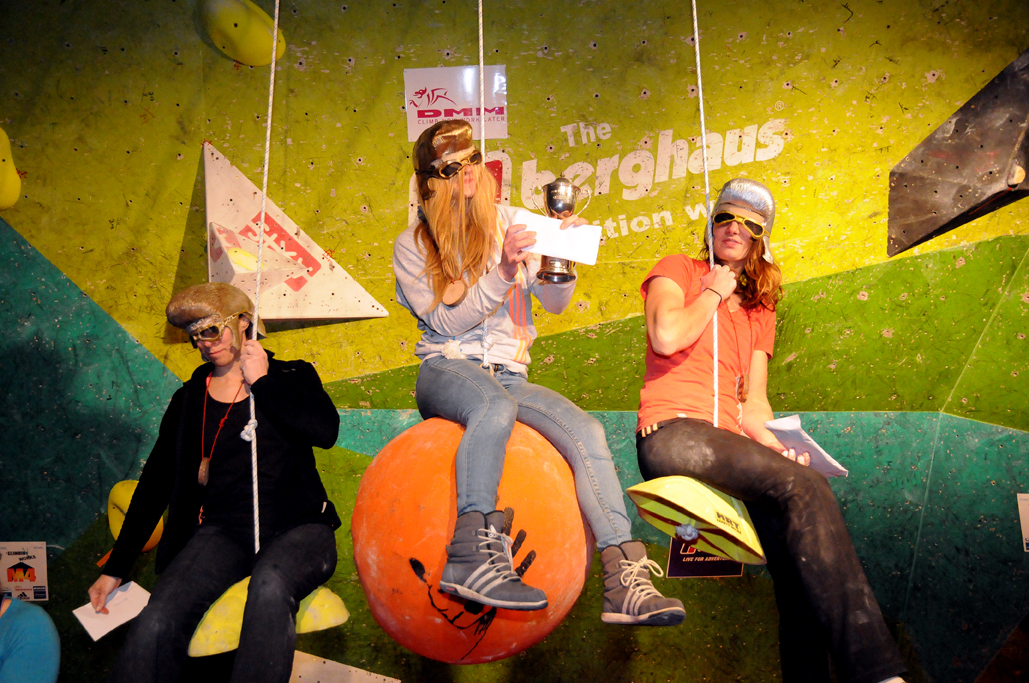 For more info click through as follows; here or the full results or here to watch the finals via the IFSC YouTube.