Chris Sharma has gone back to his roots – literally – for his latest project free-climbing a gigantic Redwood tree in a Californian forest.

Sharma, ex of the Santa Cruz parish, has apparently long admired the Coast Redwoods. In his latest project he teamed up with tree biologists from UC Berkeley to help collect scientific data as well as to climb one of the giant trees.

“The specific tree Chris chose was good because it was fire-scarred,” said Dr Anthony Ambrose – one of the scientists involved. He estimated that the tree was around 600 or 700 years old. “It didn’t have a lot of lichen and moss growing on the trunk. And the bark was solid. But because of that, the fissures and grooves in the bark weren’t that deep.” 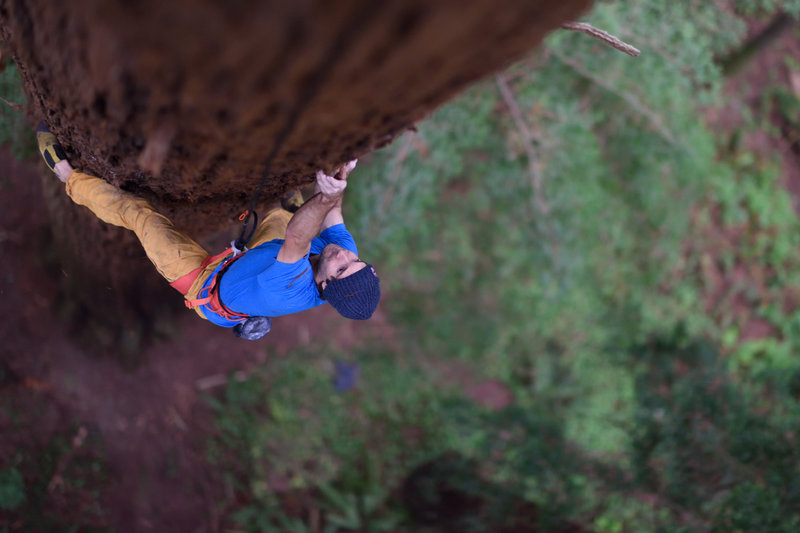 Sharma worked his tree project, which he named “Jumbo Wood,” on top rope. “It was straight-up real climbing,” he says. “Probably at least 9a!”

Sharma found it difficult to remember the beta. “It’s so overwhelming," he said. "As rock climbers, we’re trained to look at cliffs and see the sequence. On the Redwood, I drew a blank. I got disoriented by all the patterns. There was definitely a very specific sequence.”

Sharma placed tiny chalk tick marks on the best bark hand holds — which would all be gone the following day due to the dense cloud of Humboldt fog that would descend upon the forest each morning.

“The first 50 feet were really sustained,” he said. “Good pinches and good foot jams between the bark. Then the foot holds ran out, and it was just pure compression moves with really precise foot jams.”

The Red Bull filmed the project showing Sharma, a Red Bull sponsored athlete, pinching and laybacking his way up the tree on a top-rope. Red Bull secured permits from Eureka city officials and the Humboldt County Film Commission and said that the team chose a location with a pre-existing network of well-traveled trails. Sharma found the tree - a 77-meter monster with 50 meters of pure bark before reaching the first branch.

Red Bull are donating $.10 per video view up to $10,000 to benefit redwood tree research so click through here to watch the video or click here to read more about the project on the Red Bull site…