The on-line campaign against the upgrading of Peak District footpaths to allow use by motorcycles and 4x4’s has gathered significant support since it was launched. Currently, the campaign has 6,793 signatures against the proposal to upgrade the footpaths, just short of the 7,000 signatures needed to force a public debate on the issue.

The use of ‘green lanes’ by motorcycles and 4x4’s over recent years has seen some of the tracks near iconic crags in the Peak well and truly wrecked. Stanage Causeway, for example, having been used by 4x4’s for some time was in a heavily damaged and eroded condition until it was repaired recently. Since then, motorised traffic has been banned from using it by the Peak District National Park (PDNP) who have taken out a Traffic Regulation Orders (TRO). To reinforce the ban, road signs and barriers have been erected to prevent access as anyone approaching High Neb area will have seen.

The petition organiser believe that if a footpath has ever been used by a horse and cart since the 1800’s then the ‘off-roaders’ now realise that they can apply to have the use changed from a footpath to a byway or even a Byway Open to All Traffic – a so-called BOAT. They argue that if and when such changes of use might be granted then that could well allow the use of these lanes by motorcycles and 4x4’s. Furthermore, the belief is that it would be only a matter of time before significant damage occurs to both the physical fabric (such as deep erosion) and to naïve wildlife and flora habitats.

There are however those that oppose the petition. Some argue that it simply isn’t needed as the PDNP can and have (ref Stanage Causeway) taken out TRO’s to successfully ban motorised traffic. Others point out that horse traffic, mountain bikers as well as walkers and climbers cause damage to the environment which results in wide swathe/paths developing on popular tracks. 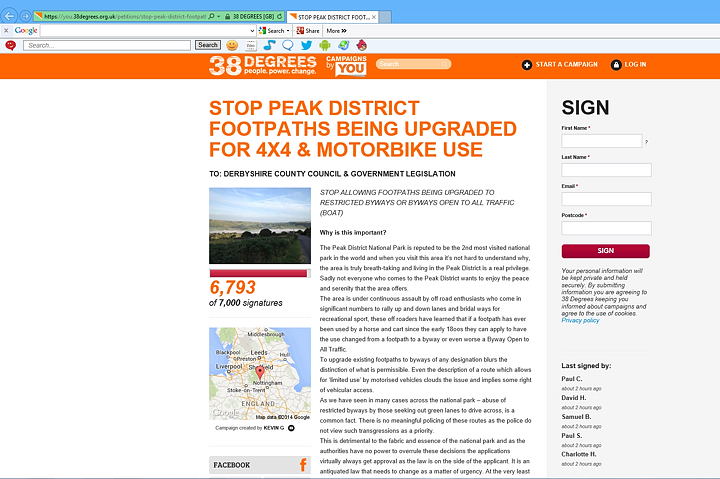 For further details, including more comments on the pro and cons of this issue, check-out the petition link here https://you.38degrees.org.uk/petitions/stop-peak-district-footpaths-being-upgraded-for-4x4-use