Billy Ridal talks about bouldering and about sending Careless Torque

Today, Billy Ridal became the youngest person to repeat Careless Torque (Font 8a), Ron Fawcett’s classic bloc at the Stanage Plantation, usurping Alex Waterhouse’s crown which he took only a week ago. 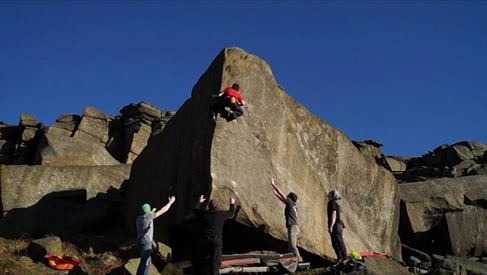 Billy Ridal, the youngest person yet to repeat Careless Torque (Font 8a)

We caught up with Billy after his ascent today…

It's been quite a month for you - first getting onto the GB Junior Bouldering team and then doing Careless Torque! How fantastic is that?

Yeah i'm really happy with the last couple months and this year as a whole, since the Climbing Unit opened in March I have been able to get down to the wall and train more and I have generally been more motivated. Getting onto the team was awesome for me. I was on the junior lead team for three years before losing my place in 2012. Getting onto the bouldering team was a really nice recognition that I was still up there with the best of the youth at the moment. As for Careless Torque, it is just a really obvious and aesthetic line that I have looked up at in awe since I first visited The Plantation. It wasn't until Alex Waterhouse convinced me to give it a go last month that I actually considered it though. When Alex did it last Sunday it just got me even more motivated, we had a great session in the snow and I was really happy for him but of course I wanted to get to the top as well.

You've just snatched the crown off Alex Waterhouse for the youngest ascent. Is there anyone else in the team lining themselves up behind you or are you going to keep that crown for a while?

I know that's pretty cool. I'm good friends with Alex so there is a bit of friendly rivalry over things like that, I'm sure he'll be happy for me to do the climb even if it does mean taking his crown. As for the rest of the team, there is a huge amount of talent in the Junior team at the moment, there is a number of people who I think could take the youngest ascent if they put their mind to it, I would be excited to see them try, it is just nice to see such a classic line getting some attention.

Hamish Potokar did The Voyager today so it looks like there's something special happening in Team GB Bouldering squad?

Hamish is my hero. The guy is super strong so I'm not really surprised he managed it, in just two sessions as well I think. His psyche is crazy too, he went and tried The Ace afterwards and got pretty close, how he can do so much hard climbing in a day is beyond me. Since the junior bouldering team was created two years ago it has been going from strength to strength. We have had a number of European finalists and a few podiums which is really cool to see. I think the main thing is just being able to climb with other young people of a similar ability, it is super motivating to see what everyone else is doing and so it makes you want to train harder to keep up with them. There is a really friendly encouraging atmosphere when the team is together so I'm very honoured to be able to be a part of it for the next year.

What’s your next focus?

I have a few more things which I would like to do this winter: Low Rider, Western Eyes, Renegade Master and River of Life are high on the list, whether or not I will be able to do all or any of them is another matter though. After that I will be focusing on competitions, hopefully I can get selected for some Europeans and see what I can do there. I also have my second year of A levels to consider so hopefully my school work won’t get neglected by too much climbing.

For the record, Billy took just four sessions to get Careless Torque.