Ben Moon’s latest blog is all about brushing and the damage it can cause to soft rocks such as sandstone and in some cases, gritstone. Ben, like most climbers, admits to having brushed loads of holds in his time but now he’s questioning whether it’s necessary, whether it works and whether there isn’t a better way. 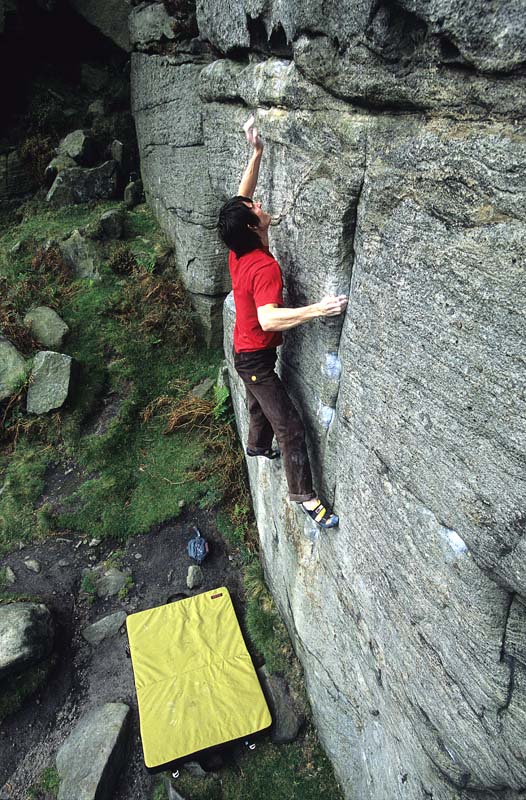 Ben Moon throwing a lap on West Side Story (Font 7b+) back in 2004. Photo Keith Sharples

For years, the commonly held view is that rock friction is improved if excess chalk is brushed away. Ben explains our brushing addiction; “We all do it and it’s almost become a ritual, part of the mental process of preparing for a hard send.” Whilst acknowledging that his own company sells brushes, Ben opens his blog by questioning the case for brushing; “The only cases where it might help are where the hold obviously hasn’t been brushed for a long time and is really caked in chalk. In my experience this is not often the case and holds generally are pretty clean. If the hold is relatively clean and by clean I don’t mean free of chalk I just mean free of large particles of chalk or layers of chalk then brushing is unlikely to provide any advantage other than a psychological one.”

And hence for those circumstances where brushing is necessary Ben offers this advice to would-be brushers; “Where it is necessary to brush a hold it should be done sensitively, gently, in moderation and with a soft natural bristle brush.”

Next up Ben focuses on what he believes brushing doesn’t achieve; “I certainly don’t see how it will dry out the hold and remove moisture which is really what you want.”

If by now you’re getting the vibe that Ben is coming out in favour of not brushing you’d be right: “Therefore in most cases I would say brushing is pretty much a waste of time and the benefit will be far outweighed by the long term damage you will do to the rock.”

So, if he believes brushing is wrong and/or ineffectual what is Ben saying might be better? Although the short answer to that question is whacking the rock with a rag – Ben has to firstly deal with a past controversy which arose when he was photographed climbing Brad Pit with a resin pof on the floor behind him.

Ben explains both the Brad Pit saga and his thoughts on whacking. “Years ago there was a huge controversy over a front cover photo of me climbing Brad Pit at Stanage with a ‘pof’ on the ground below me. For those of you who don’t know, a pof is a French invention from the forests of Fontainebleau. It’s basically a rag filled at one end with pine resin. Once constructed you end up with a round ball of pine resin at one end and a long loose tail of material at the other. The French used to pof the resign onto their hands, rubber and the holds, then use the tail end to whack away the excess and aerate the hold. Some would then use chalk on their hands, others would do without the chalk. I tried all combinations and really didn’t like it so stuck to chalk. The British didn’t like the resin and the French didn’t like the chalk and on more than one occasion whilst using chalk in the forest of Fontainebleau I was subjected to a wagging French finger and the words Non, non, non! Over time I think the French realized that actually chalk was better than resin and it’s now very rare to see anyone using a pof.

Anyway when British climbers saw me climbing on the Peak grit with a pof they were rightly up in arms. Having seen the damage that resin had done in Fontainebleau I couldn’t agree more however although there was resin in my pof I wasn’t using the resin part of the pof just the tail end to whack the holds.

And then Ben gives us his thoughts on why whacking is better than brushing; “This has a similar effect as brushing but is in my opinion much more effective and does far less damage. The force of air generated by the tail end of the pof has the same effect as wind drying out and cooling the holds and thus improving the friction. Neither of these effects is achieved through brushing.

“I am certainly not advocating the use of a resin pof but there might be many benefits in replacing the resin with chalk and the brush with the new chalk pof.”

So there we have Ben’s thoughts on brushing v’s whacking. Thanks to Ben for raising the issue and getting the ball rolling. Maybe we’ll see a Moon chalk-pof available soon?