Ben Heason has just added one of the hardest and scariest routes in Pembroke, Muy Caliente (E9 6c), to his CV. 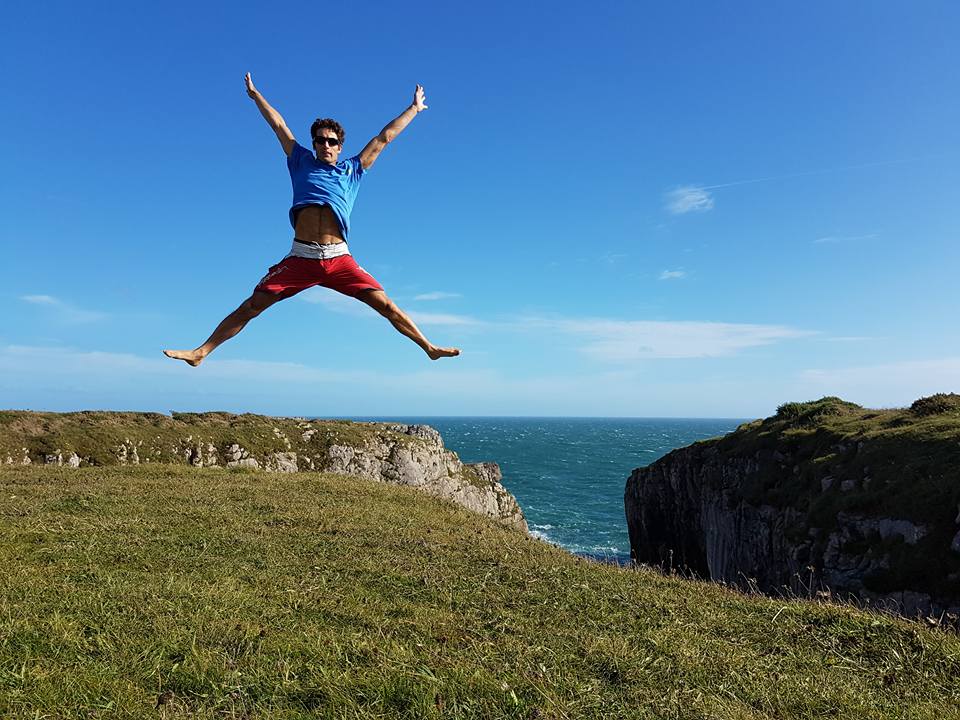 Ben 'star jumping' Heason after topping out on Muy Calinete

Ben has been on something of a tradfest year this year given he was on the BMC’s South Africa trip – and then the return leg – although he’s been ticking sport routes as well. Link many Ben was feeling somewhat disgruntled with the usual (bad) British summer weather but he took advantage of the better conditions last week. Posting on social media Ben commented; “After a frustrating couple of weeks of fickle (awful!) British conditions, bad skin, and basically being a bit shit, it seems a few days ticking Extreme Rock routes in the lakes last weekend did the trick. Supercool on Wednesday, and topped that with Muy Caliente today!

Originally climbed in 2010 by Tim Emmett, Muy Caliente was given E10 6c along with the accolade of Wales’s hardest trad route. Climbing the wall left of Ghost Train (E6 6b) in Stennis Ford, Muy Caliente had a series of repeats from top climbers – Canadian Steve Townshend, Dave MacLeod, James Pearson and Neil Mawson within a year of Emmett’s first ascent. James Pearson in fact attempted to flash it on a ground-up attempt; sadly he fell but got it next go. Since then, Neil Mawson’s Choronzon (E10 6c) has knocked Muy Caliente off the top slot. Steve McClure repeated both last year. The climbing on Muy Caliente is very impressive – a long hard run-out from which a ground fall is considered the likely outcome plus a hard boulder crux (V7) once good wires have been placed. Overall, Muy Calinete is now considered to have ‘settled’ back a little and is thought to be F8a+/E9. 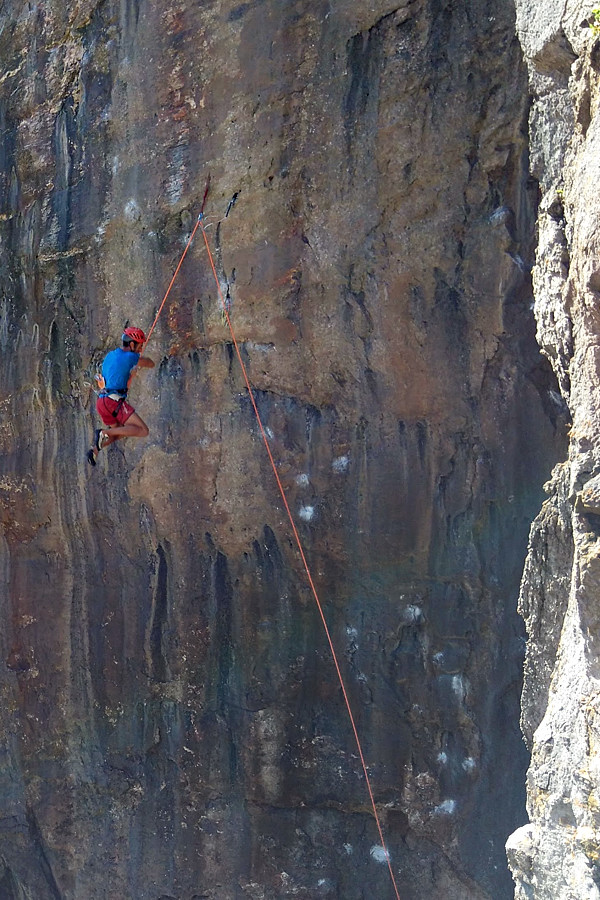 Ben is clearly – and rightly so - delighted with his week and his ascent of both Supercool and Muy Caliente; “two of the best routes of their kind I've ever done”. CLIMBER have been in touch with Ben for the low down on his week…

Have you been 'lusting' after Muy Caliente for a while and if so what attracted you to the line?

Yeah, I've definitely been keen for it for a while now but haven't been climbing anywhere near well enough for a few years - I'd say it's pretty likely I'm the weakest person to climb it so far! I abbed down it in trainers a couple of years ago, just to look at the holds... Tried it briefly last year but couldn't get anywhere near the two hard moves, and the rest of it felt pretty tricky.

What did you do by way of preparation?

At the start of this year I knew I was climbing better than last year so had another look in the Spring. Managing to do the moves got me pretty psyched, and I knew I had a chance this year, so I used that thought as motivation to pull my finger out a bit.

I had a fair few visits down there, getting more familiar but still lacking physically. Sport climbing fitness (a bunch of Extreme Rock routes in Yorkshire, and then Supercool at Gordale) and some finger boarding did the job.

I don't trad climb as often as I used to but it will always be my favourite style, and Pembroke is among my all-time favourite places in the world. Muy Caliente is THE line that smacks you in the face every time you go to Pembroke and walk along the tops, it's pretty much perfect - hats off to Tim for unlocking the first ascent, with an inspiring video to go with it.

How did the actual ascent go?

In a funny way the ascent went almost disappointingly smoothly. When I belayed Ste Mac do it last year it was clearly amusingly easy (physically) for him; it seemed like he kind of missed out on the 'real challenge'. For so long whilst trying it, it was beyond me so it seemed a perfect challenge. Mentally, the run out didn't phase me at all, it was all about the two crimpy moves and whether or not I'd be too pumped to do the top one.

I spent a frustrating few days down there a couple of weeks back and had a try on the last day, despite sub-optimal conditions. I fell off the top crux, coming away a bit disappointed, knowing I had it in me to do it that day. I worked hard for two weeks, went back down for a very last minute, unplanned quick few hour trip to make the most of better conditions, and a willing belayer (a mate, Ali Kennedy, who also lead it recently, as well as Point Blank) - and, despite a couple of slightly damp holds, I didn't even get pumped, strange!

Can you contrast the style and difficulty of Supercool and Muy Caliente please?

Supercool currently has a very key foothold missing for the crux (and hard clip), though still the same grade I think. Doesn't suit me so I found it quite tricky, but it did the job of dragging my fitness up. Muy Caliente is more my style, bit more physical - plus I love monos and don't mind runouts. I also spent more time on Muy Caliente so guess I had it more wired.
Most would probably find supercool easier but not a lot in it for me in the end?

Maybe something a bit more local and/or something that hopefully won't take quite as long, and I'm hopefully off to Ethiopia in November. But before any of that, maybe drink a beer or two, eat some crisps and hang out with some people I've neglected a bit through my obsession this summer...