Adam Ondra talks about his flash on Super Crackinette (F9a+) 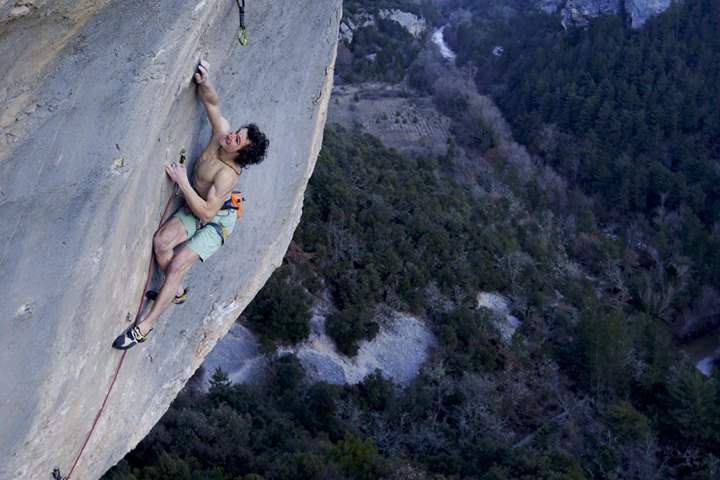 Like many top climbers, Adam Ondra is acutely aware that candidate routes suitable for hard on-sights or flash attempts should be savoured. Ideal routes for on-sight attempts should be more resistance-based climbing rather than out-and-out cruxy or knacky. This is perhaps less so if going for a flash but then the quality of the beta you have comes into play and that is dependent on the climber(s) that the beta comes from.

It appears that Adam first saw Super Crackinette a couple of years ago and thought that it looked like a good route to try and flash. Fanatic Climbing (here), already covering Adam’s visit to St Leger and hence were able to report on Adam’s flash, describe the route in some detail. “This very sustained route has no well defined crux, but rather consists of a 25-30 move resistance and finger intensive effort on a big overhang. The hardest sequence is just before linking into ‘Crackinette’ and you need to fight until the end, where there’s an awkward 8b+ crack with low-percentage moves.” The original Crackinette (F8b+) was bolted by Laurent Triay; subsequently Quentin Chastagnier bolted the direct start to give Super Crackinette.  Fanatic Climbing also report that it took Alex Megos three days to do the first ascent of Super Crackinette.

Despite being unsure Adam committed to the flash attempt during his latest trip to St Leger. His plan was to use beta from Quentin Chastagnier and hence he arranged for Bernardo Gimenez to film his attempt. That attempt, as we now know, was successful.

Adam describes the whole process in considerable detail on Black Diamond’s Facebook Page. There’s no doubt that he’s (rightly) delighted with his achievement; “Getting to the anchor was really emotional and I see this 9a+ definitely as one of the best accomplishments that I have ever done.”