The  winners of the 2019 Piolets d’Or, the annual award for significant ascents in the mountains, have been announced by the International Jury.

In addition, the 2019 Lifetime Achievement Award (Piolet d'Or Carrière) will be awarded to Krzysztof Wielicki, a Polish mountaineer whose 1996 solo ascent of the Kinshofer Route on Nanga Parbat is taken to be his stand-out achievements.

The International Jury for the Piolets d’Or released the following details of the three climbs done by the 2019 award winners.

Lunag Ri is the culminating point of the Rolwaling's Lunag Massif, which straddles the Nepal-Tibet border. Before 2018 it was one of the highest unclimbed peaks in Nepal and there had been at least four serious attempts to reach its lofty summit. An attempt from the southeast, and another from the north, both ï¬nished on a subsidiary southeast top. In 2015 Conrad Anker and David Lama reached a point on the west ridge around 300m below the summit, ï¬nding the ridge more complex and diï¬ƒcult than expected. They returned in 2016, only for Anker to be evacuated by helicopter after suï¬€ering a stroke. Lama subsequently made a bold solo attempt, surpassing his previous high point by around 50m.

In 2018, when Anker conï¬rmed he would no longer go on this sort of expedition, Lama decided to decline other oï¬€ers from strong partners and to go it alone. In the intense cold of late October, the Austrian climbed diï¬ƒcult mixed terrain, ice and snow, with two bivouacs, to reach the crux technical climbing on the steep headwall. Surmounting this, he made an airy traverse on to the spectacular diving-board summit. Lama descended by rappel, mostly along the line of his route. It was a climb that would remain "engraved in my memory for the exposure, the diï¬ƒculty, the cold and the loneliness, and for a successful conclusion to a personal project". 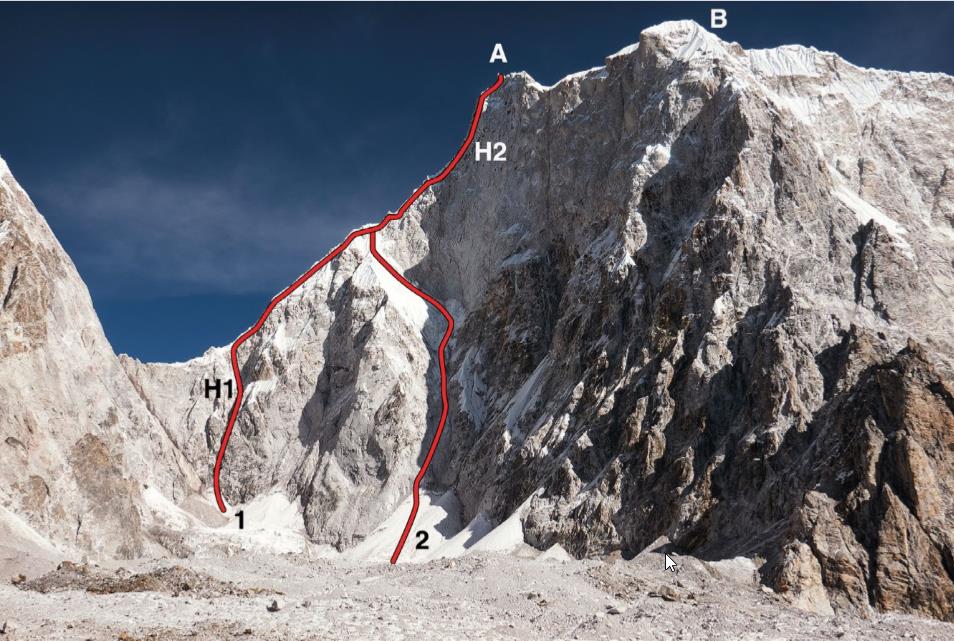 The rarely-attempted Lupghar Sar massif in the Hispar Muztagh of the Western Karakoram comprises three peaks on a high east-west summit ridge. The west summit was ï¬rst climbed in 1979 by Germans via the southwest ridge, which featured dangerously rotten rock - a characteristic of this summit. It was repeated the same year, and again in 1980, by Japanese, the ï¬rst of these expeditions continuing east for more than one and a half kilometres along the sharp ridge to the Central (Main) summit. These were full scale sieges and neither the West or Central peaks were seriously attempted again until 2018.

After extensive acclimatization and scouting of both face and complex approach, Hansjörg Auer left base camp and navigated the wild Baltbar Glacier to a bivouac at 6,200m below the left side of the west face of Lupghar Sar West. The next day he made a rapid ascent of the west face to reach the steep upper section of the northwest ridge at 6,900m. Although he had planned a second bivouac, he decided to cache his gear and head for the top. Very loose mixed terrain and a highly exposed, narrow, corniced crest led to the highest point. Auer managed to descend to base camp by the evening of the same day. Although the technicalities were not high, this was bold, committing and precarious climbing, with a taxing descent of the same route, completely alone at high altitude and in a remarkably fast time. 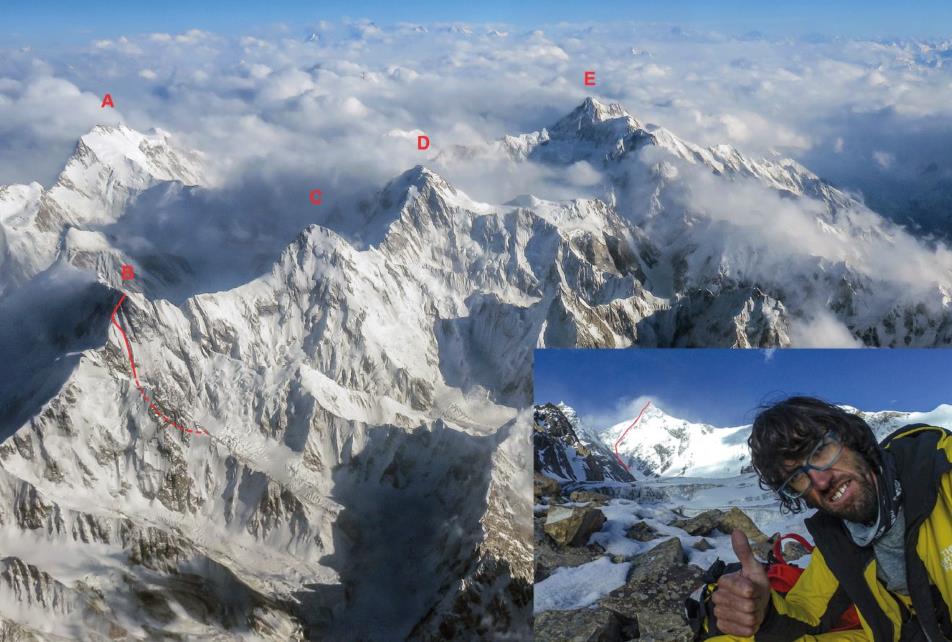 Hansjörg Auer on the Baltbar Glacier, and his line on the west face of Lupghar Sar West.

In 1978 four Americans attempted the "Walker Spur of the Karakoram", the north ridge of Latok I from the Choktoi Glacier. Jim Donini, Michael Kennedy, George and Jeï¬€ Lowe spent 21 days climbing over 100 pitches and had probably surmounted all the diï¬ƒculties, when a combination of wind, cold and Jeï¬€ Lowe’s rapidly deteriorating condition due to altitude sickness forced a retreat. It remains one of the ï¬nest and most notable near misses in the history of alpinism. Despite literally dozens of subsequent attempts over the next 40 years, no one came close to reaching their high point of nearly 7,000m. The ï¬rst and to date only ascent of the mountain was made in 1979, when a Japanese team reached the summit from the south.

Tom Livingstone met Luka StraÅ¾ar at an international winter gathering in Scotland. Together with Aleš ÄŒesen they travelled to the north side of Latok I, where ÄŒesen conï¬ded, "we think there is a better way to the summit than the full north ridge". American Josh Wharton, who travelled to the Choktoi four times to attempt the north ridge, envisaged a line that would climb the right ï¬‚ank of the ridge, then slant up to the (west) col between Latok I and II. From there his proposed route crossed onto the south side of the mountain, where easier terrain would lead to the top. This was the route eventually followed by the Anglo-Slovenian trio, who climbed generally good ice runnels and névé on the right side of the ridge to around 6,400m, at which point they angled up right to reach the west col at 6,700m. From there they followed south-facing snow slopes in generally stormy weather to the summit, which they reached on their ï¬fth day. Descending approximately the same line,  the team regained base camp three days later, having made only the second ascent of this prestigious mountain in the Panmah Muztagh, and the ï¬rst from the north. 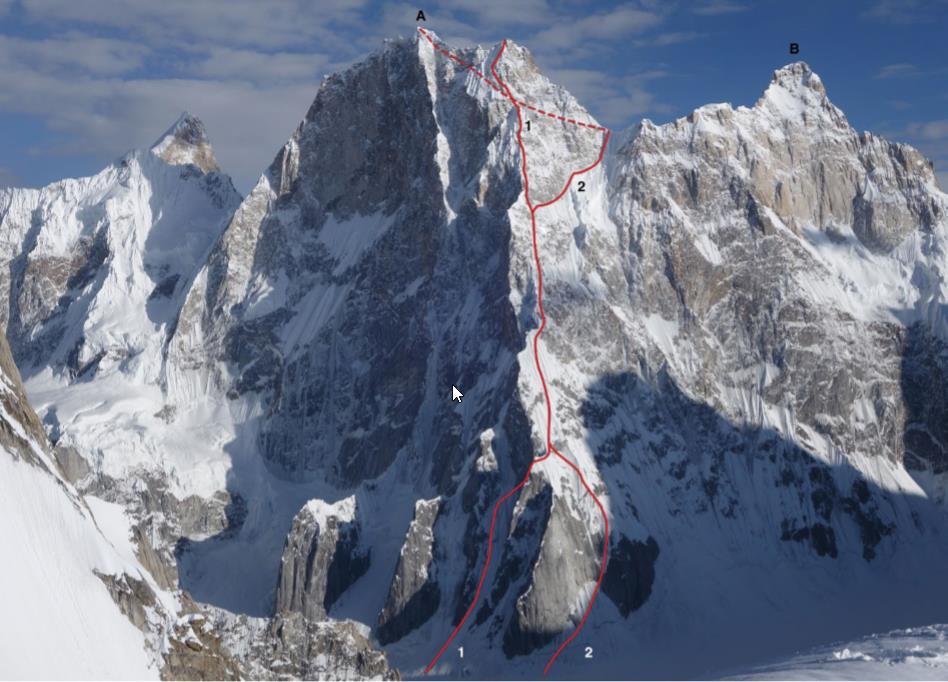 Seen from the north, (A) Latok I (7,145m) and (B) Latok II (7,108m). (1) The 2018 Russian attempt on the north ridge, reaching the summit ridge at approximately 7,050m. (2) Anglo-Slovenian route to make the second ascent of Latok I, passing through the west col to ï¬nish via the southern slopes. ©Sergey Glazunov/American Alpine Journal