Molly Thompson-Smith and Will Bosi took the top podium positions in the Lead whilst the Speed titles went to Jennifer Wood and Will Bosi at the British Championships at Ratho last weekend. 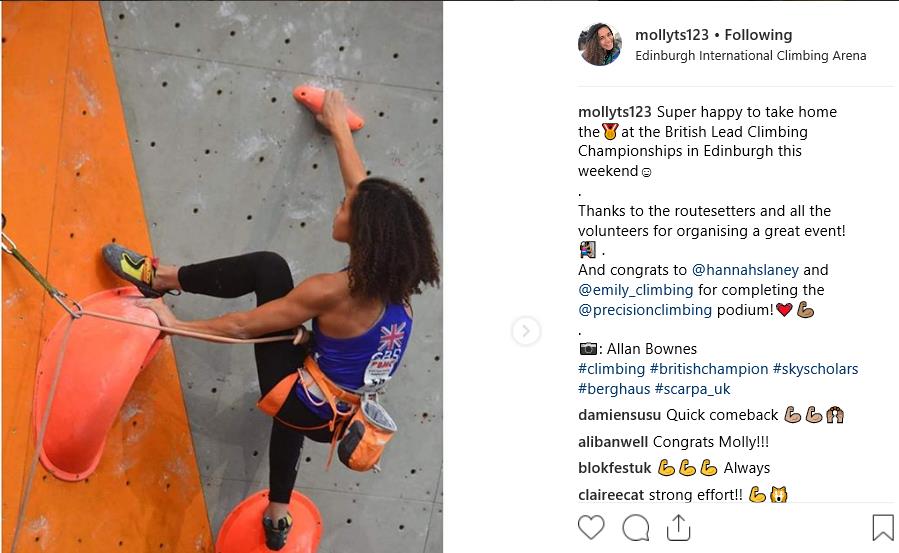 Molly Thompson-Smith making an impressive return to competitions in the aftermath of surgery.

Will Bosi topped both qualifiers on the Saturday so went into the final in first place ahead of Jim Pope in second whilst Dave Barrans, Kieran Forrest and Alex Waterhouse all tied in third place. Sunday’s final however produced a thrilling finale when Hamish McArthur turned on full power to finish joint top with Will Bosi. Will took the championship win however based on countback, Hamish took the silver edging Jim out into third place.

The women’s event was also a close run affair with Molly Thompson-Smith and Hannah Slaney both topping the final route. Once again the win was decided on countback with Molly taking the title given she topped both qualifiers on Saturday forcing Hannah into second place. Emily Phillips took the bronze narrowly pipping Jo Neame by the slimmest of margins.

Not content with winning the Lead comp Will Bosi also took the Speed gold ahead of Max Milne and Alex Waterhouse. Impressively Will shaved yet more time off the British Speed record (previously 7.66 secs) when he stopped the clock in 7:47 secs!  Jennifer Wood took the women’s Speed title beating Emily Phillips whilst Pippa Watkins took the bronze.

Molly’s win – her fifth lead title – is particular impressive given that she’s still recovering from the finger surgery which she had early in the year. Molly’s win at Ratho, together with her recent result in Kranj, shows that her rehab is going well and she’s well on the way back to full strength. “I’m really pleased with what I managed to turn this year into” Molly told CLIMBER, “sitting at home after surgery with my arm in a cast and finger held together by stitches I really didn’t think this year was going to be very positive. So to have come back at the level I have done with not much time for recovery, let alone training time, was a good sign for next year!” It's a bit of a cliché but injuries can make climbers stronger not least in their mental strength. Molly again: “It’s been a tough year and I struggled coming straight back into the middle of the competition season; I doubted whether I was ready to be back again and I had regained the nerves I had when I first started competing. However I know I made good progress this year, and with a winter full of healthy training I’m so motivated for next year. Molly told CLIMBER that’s she’s off to Kalymnos now as well as looking forward to getting involved with some plastic bouldering too!

Will’s double win and new British Speed record is also very impressive. It’s been an impressive year for Will both in the comps and out on the rock where he recently did Practice of the Wild (Font 8c), his first of the grade, at Magic Wood. Will, who has now won both the British Lead and Speed championship on three occasions, is especially pleased with the way his comps have gone this year. He told CLIMBER “This year feels like a breakthrough year for me. I’ve had a lot of really good results and I’m incredibly psyched to keep training and push for the Olympics!” He’s also really psyched – and rightly so – about how his speed climbing is going; “I’m very happy with the new British record I’ve set as it also reaches next year’s GB qualification time! I’m also very happy to finally be getting the consistency on the speed with every run this comp being sub 8secs.” Will has also called time on the comps this year and is currently taking a well-earned break before returning to training.