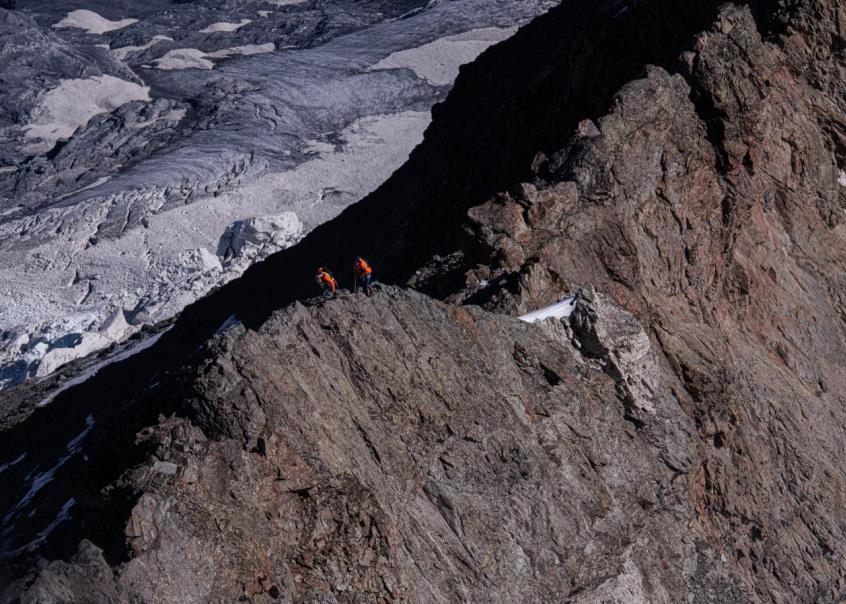 The two Bernese alpinists beat the previous record set by Ueli Steck by 3 hours and 2 minutes.

Mammut has released the following details about the ascent:

Mammut Pro Team athletes, Nicolas Hojac and Adrian Zurbrügg, set off on a special mission on Tuesday, July 12th, 2022 – a record attempt on Switzerland`s most famous mountain range. The pair headed out of Grindelwald Grund at 01:00 to complete the world-famous trio Eiger, Mönch, and Jungfrau's skyline within a new record time.

After weeks of planning and preparation, the ideal conditions presented themselves in mid-July 2022. “We wanted to climb the route as quickly and safely as possible. For this, we depended on ideal conditions”, Hojac and Zurbrügg explained. The snow-poor winter in combination with the unusually hot days in June made planning the project more difficult. Especially as conditions typically encountered in late summer prevailed. For the project`s success, it was crucial that there would not be too much glare ice on the route. In that case, more belays would be necessary, costing the two alpinists significantly more time. “We knew that without belays, we might be able to climb way faster through the glare ice – but taking that risk was no option”, explains Nico Hojac.

However, the weather provided favourable circumstances, which made the time-consuming belaying unnecessary. All was set for the record attempt. While most mountaineers need four to five days for this ascent, the aim was to beat Ueli Steck's record of 16 hours and 10 minutes.

By sunrise, the two Alpinists had already climbed to the Eiger summit and covered almost 3000 meters of altitude. The record chase was going according to plan. Towards the tour’s end, they undoubtedly felt a lack of sleep and exertion. Therefore, the experienced alpinists needed to focus all the more on climbing safely.

At 14:08, Hojac and Zurbrügg reached the bus stop in Stechelberg – the route's finishing point. It had taken them 13 hours, 8 minutes and 49 seconds to complete the distance of 30.46 kilometres and the altitude of 4,780 metres. Their time is 3 hours and 2 minutes faster than Ueli Steck's original record.

“Climbing the route in this time makes us very proud,” Hojac and Zurbrügg stated. However, they are also fully aware that an even faster time might be possible as Ueli Steck had not maxed out his previous record. But for Hojac it is not primarily about the comparison with others: “What appeals to me the most is the personal challenge. It's about learning and growing through these projects.”