Given that Megos has done plenty of F9a’s before – to say nothing of the fact that he was the first climber ever to on-sight F9a – you might be tempted to think, ‘so what’. 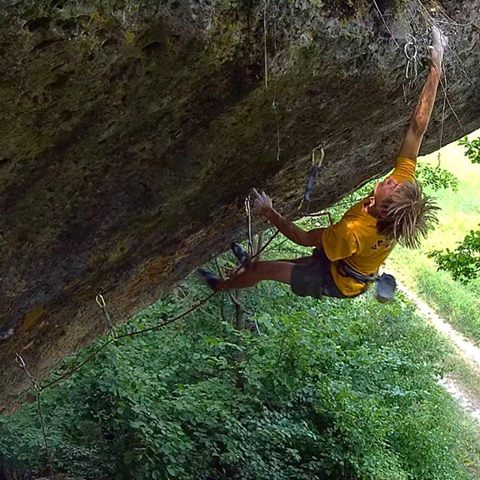 Alex Megos on the crucial dyno of his new F9a. Photo Alex Megos/FB

Well, as usual, the devil is in the detail and the detail on this one doesn’t sound encouraging – even for your ‘average F9a leader’. In Megos’s own words, it’s three moves and it involves two mono. The crux was a monster dyno – off a mono, of course – to a distant hold around the top tip. Ah yes, it’s up a 60 deg overhanging wall as well…

We’ll leave the final words or appreciation to Thomas Mietzel who added the following to Megos’s FB post; “Ohh man! My chances to climb one of the top 100 hardest routes in the FJ getting not better with FA's like this! So stop it now dude!”