Seventy two hours since the devastating earthquake in Nepal and the death toll is now understood to be greater than 4000 and still rising. Whilst the evacuation of stranded climbers from Everest has now been completed, specialists search and rescue teams continue to arrive in Nepal to work alongside the Nepalese military in rescue efforts across the country. We understand also that a massive food aid programme is due to commence today. 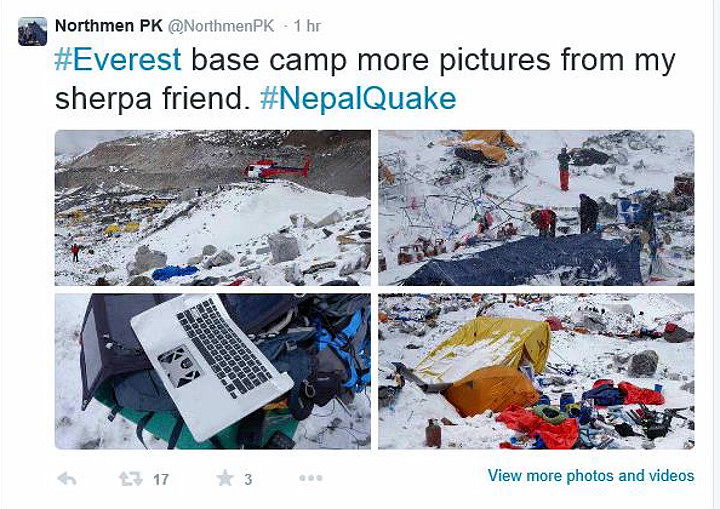 Yesterday saw the bulk of the 150 plus climbers stranded in Camp 1 and Camp 2 on the South Col route evacuated by helicopter. The normal route up the Khumba Icefall had been closed because of the damage caused by the avalanches so helicopter evacuation was the only was the stranded climbers could be rescued. Up to five helicopters were involved in the rescue mission each flying continuous round trips. Flights began early morning and continued until early afternoon yesterday when the weather deteriorated and the operation had to be suspended leaving over a dozen or more climbers stranded for another night in Camp 1. Because of the altitude, the helicopters evacuated two climbers at a time from Camp 1 dropping them down at Base Camp before returning back to Camp 1. It is understood that some climbers descended down to Camp 1 to be evacuated although some were helivacuated straight from Camp 2 – albeit one at a time.

Dave Hahn, a guide/leader with RMI (Rainier Mountaineering Inc) who was rescued yesterday describes vividly his own evacuation from Camp 1 on the RMI news feed here. After his own evacuation he reflects on his experience saying; “Now back down to earth… we understand just how lucky we’ve been and we are sad beyond words to learn how unlucky others have been .”

Sean James who was leading an expedition on the Tibet side of Everest was interviewed on Sky News. Listen to that interview here.

The remaining climbers have already been evacuated from Camp 1 already today in the final stages in of what has been the biggest ever evacuation off Everest. According to @Northman PK a total of 173 climbers have been rescued off Everest high camps in the two-day rescue mission. Elsewhere in the region, climbers are still awaiting heli-evacuation on Makalu and Annapurna. Elsewhere, climbing teams who have now re-grouped in their respective base camps are now planning to withdraw from the mountains – some personnel are assisting with the wider rescue operations on-going elsewhere.

The situation across Nepal remains dire. The wide-spread destruction is hampering movement of rescue teams at a time when people are travelling to be back with family members. Roads in the Kathmandu area are said to be heavily congested.

BBC News reports that last night an RAF  C-17 transporter left RAF Brize Norton, Oxfordshire loaded with emergency equipment. It is also understood that 15 Gurkhas were amongst the troops on the transporter . Further flights are expected to leave with additional kit.

Finally, anyone looking to donate to the aid agencies can click through these links below: