At around 10:00 am this morning news started to appear on-line that a huge earthquake had hit Nepal and that the shocks had triggered avalanches in the Everest region killing people in the Everest South Col Base Camp. The latest news (17:30) is that c. 1100 have been killed it total across the region. Nepali police believe that two thirds of those who have been killed were in the Kathmandu Valley with the remaining in the capital itself. It is understood that 20 of those killed were at the South Col Base Camp. The Guardian has a live news feed here. 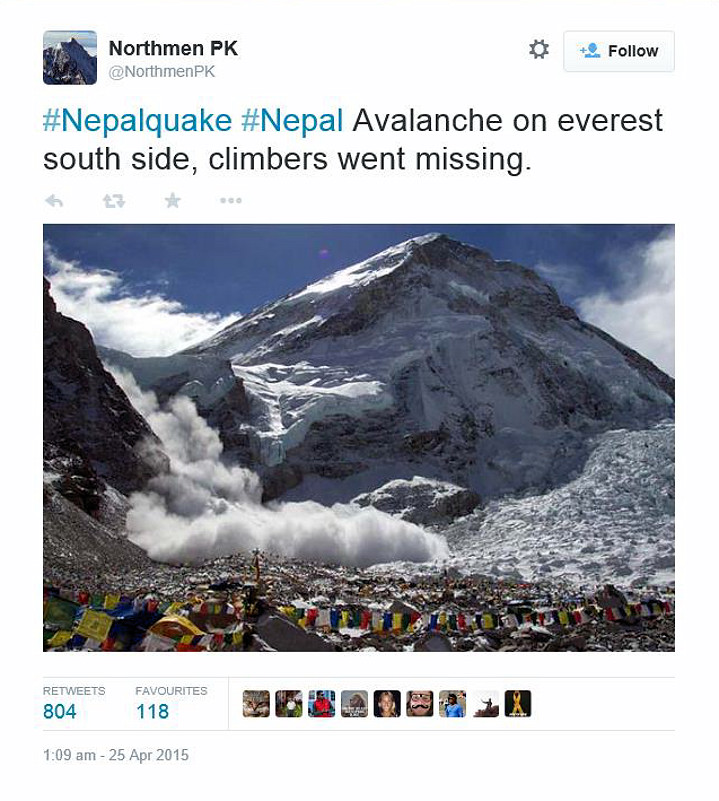 Images of the avalanche on the south side of Everest posted on Twitter.

Reports are that the 7.9 magnitude earthquake is the worst to hit the country in 80 years. The epicentre was 80kms north-west of Katmandu but the shocks have been felt as far away as Lahore in Pakistan. The US Geological Survey estimates that the quake hit at 11:56 am local time at a (relatively) shallow depth of several miles.

Mountaineering expeditions start pouring into the region in April to take advantage of the more settled weather. Sean James, an ex-Sheffield based climber on an expedition on the Northern side of Everest had arrived at their BC nearly two weeks ago. Sean posted on FB that following the initial shock further after-shocks continued for two hours and although huge rockfalls had been triggered he believed all their team were accounted for. 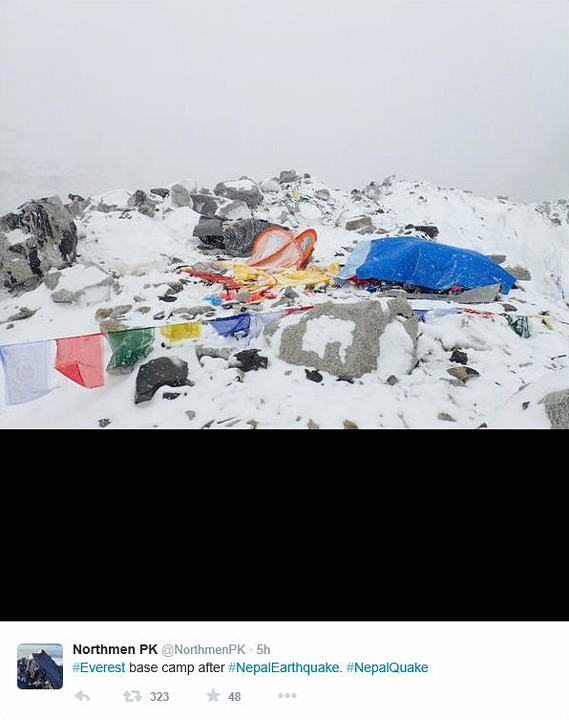 Everest base camp is hit by the deadly force of the avalanche.

Sadly, the BC on the south side did not escape the devastation and it is believed that 18 climbers have been killed. Reports coming out from the south side suggest that climbers up at Camp 1 and Camp 2 are ok but that the route up the camps has been destroyed. The south base camp is believed to be occupied by a 1,000 or more including 400 overseas climbers. The camp is known to be in a vulnerable location located on a shoulder of a rocky moraine below the Khumbu Icefall. It is understood that the avalanche swept through the centre of the camp.

Climbers on an expedition to Makalu have been reported as safe in advance base camp by expedition member Adrian Hayes despite the area being hit by huge avalanche.

This is the second year running that there have been a significant number of deaths on Everest. On April 19th last year a massive avalanche occurred in the Khumba Icefall following a serac collapse killing 16 Sherpa climbers who were preparing the route through the Khumba Icefall. After that incident all climbing was abandoned in the spring. Prior to today’s avalanche it is understood that the proposal was to use helicopters to ferry loads and equipment past this particularly dangerous section of the famous South Col route. A second disaster occurred in the autumn of 2014 when 20 trekkers lost their lives after being were caught in a storm in the Annapurna area of the Himalayan range.