As temps continue to fall and the beloved friction returns to the grit Nathan Lee – climbing with his Dad, Dominic - nipped up to Hawkcliffe for a drive-by repeat of Charlie Doesn’t Surf (E8 6c). 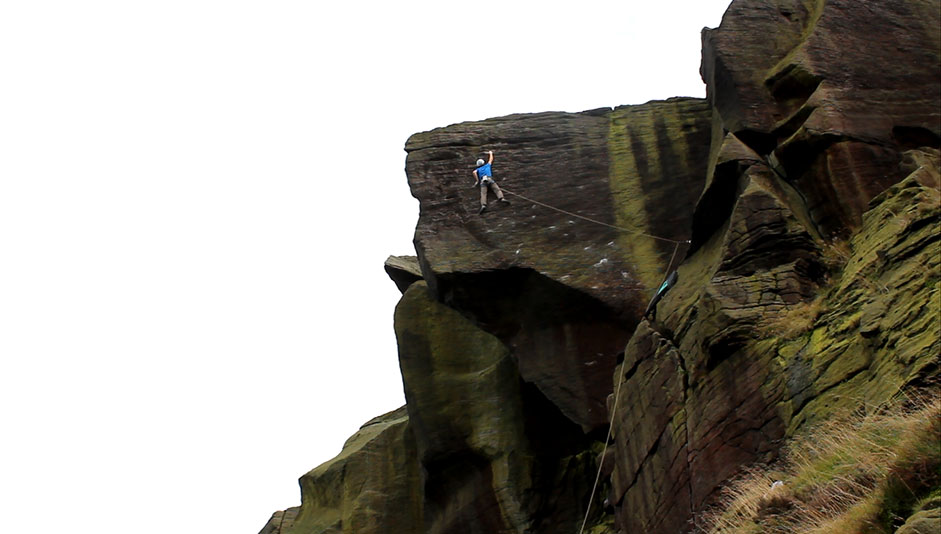 Nathan Lee on the top crux of Unknown Stones (E9 6c) at Wimberry Rock back in 2013. Photo Neil Furniss

“Hawkcliffe is a true curiosity” says the YMC’s (Yorkshire Mountaineering Club) latest guide. They add; “Hidden from the road by a dense wood, the crag is a dark, mysterious place where the sun struggles to penetrate the canopy”. You have to ask yourself whether the Hawksliffe is the best thing since sliced bread and the YMC are playing it down ‘cos they want to keep folks away so they can enjoy it for themselves – or are they saying it like it is. 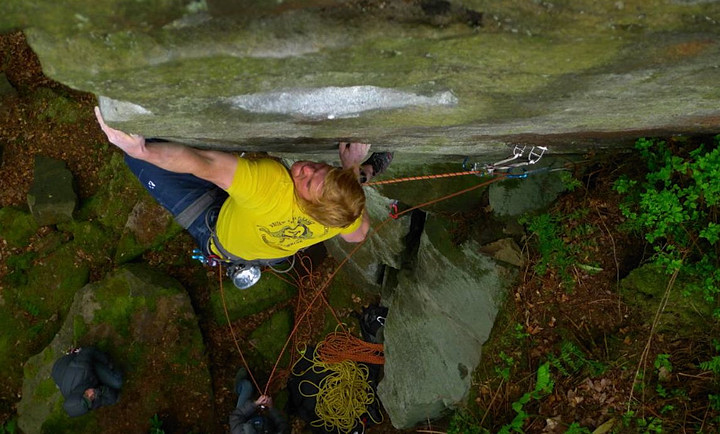 Owen Tonkins (as seen in the YMC Guide) on Flame Arete (E5 6b) – another classic at Hawkcliffe. Photo Kevin Avery

Either way, Nathan Lee and his Dad Dominic, headed up there last weekend ready for an adventure. Dominic has a string of first ascents in the Peak District to his name dating back to the early 80’s when, climbing with his brother Daniel, they help drive hard climbing forward. Nathan – or Nath as he’s normally called – is no stranger to hard grit having done the first ascent of Unknown Stones (E9 6c) at Wimberry in 2013. By the end of the day, Dominic had notched-up ascents of crag classics The Blood on the Shamrock (E6 6a) and Driveby (E6 6b). Nathan had also done The Blood… as well as a rare repeat of Charlie Don’t Surf (E8 6c) which is the direct start to Driveby done by Aide Jebb back in 1999.

CLIMBER has been in touch with Nath for the low down:

Good effort on a rare repeat of Charlie Doesn’t Surf. Sounds like it was a ‘bit exciting’?

Cheers! Yes it was a little closer to the line than I'd have liked!

Hawkcliffe is a bit off the beaten path; what attracted you there?

It's pretty jungley up there aye. I remember reading about it on the Gritlist years ago and wondering where the hell it was. Being a Grit nerd at the time (and still really…) I've always wanted to go check the place out. It is hard to find people psyched for esoteric crags like that so I eventually pestered Dad into going. We almost went to the wall as it was drizzling in Sheffield; pretty glad we didn't!

Tell us a bit about the climbing on Charlie Doesn’t Surf; how does it climb for example and perhaps compare it to other hard/necky grit leads you’ve done.

It’s a double arete feature that you climb in compression; with mainly sidepulls and crimps for your left and arête pinches for your right. A bit like Tom's route Nah'han at Gardoms, only more deck-y. It's essentially super bold to a peg at 10m. The hardest move involves getting the hold you clip the peg off. All of the meaningful climbing up to this point is unprotected, making a fall a pretty bad prospect - the landing is grim and we forgot to take pads! One of the best bits of the route is doing the top of Driveby, an ace, safe E6 which comes in from a gully on the right.

You did Charlie with your Dad holding the ropes; how does that work and do you get a bit of a mental ‘leg-up’ knowing he’s taking care of the ropes?

In general, yes. On this route though not particularly, if anything I just felt really guilty going for it. It's not as if he could do a great deal if I fell off…

Your Dad is well-known for his own climbing and strength – his pull-ups sessions back in the 70/80’s at the old Collegiate Gym in Sheffield are the stuff of legends for example – does he give you a run for your money at times?

Aye, he's still got it… At Hawkcliffe he dispatched a couple of E6's in fairly casual style. It was his 54th Birthday….

Have you got more grit projects lined up for the winter?

Nothing specific. Our visit to Hawkcliffe definitely got me thinking about Grit and headpointing as a style. I haven't done any for ages and it’s a pretty specific process. I felt well out of practice, got gripped by the fear and had no confidence!

Finally, and perhaps more importantly, can you surf or not?

Ha, no. But I do love the smell of napalm in the morning.

CLIMBER would like to thank Nath (click here for his blog) for sharing his thoughts on his repeat of Charlie Doesn’t Surf, Dave Sutcliffe for the use of his video – see below, as well as Kevin Avery and Neil Furniss for the use of their photos.