Molly Thompson-Smith has been back in action at Saint Linya – this time she’s sent Rollito Sharma Extension (F8c). 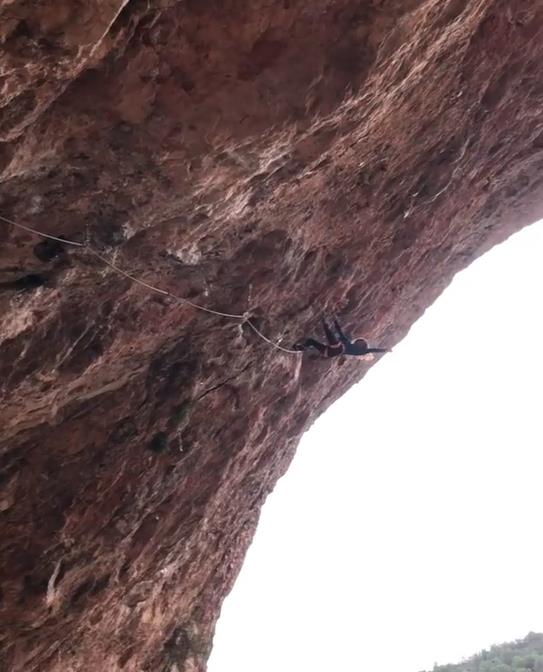 Rollito Sharma Extension is Molly’s second ever F8c, climbed only a couple of weeks after she did her first - La Fabelita (F8c). Click through here to read that report if you missed it.

Both Rollito Sharma and the Extension have lost a few holds – a tufa on the lower crux and a crimp on the top section - since they were originally climbed which is said to make it harder the shorter you are. Molly told CLIMBER how she found Rollito Sharma and the Extension; “I didn't know that a crimp high up had been broken! But the move down low in Rollito was definitely a big one without the hold that used to be there. I wasn't sure I'd be able to do it which is actually why I knew I wanted to try it! I managed to work out another way which was still powerful and spanned but within my limits. The top part of the route was rather enjoyable for me, and definitely felt easier than the bottom!

As with many long routes the heart-breakers are often quite high on the route when repeated falls can really start to grind a climber down. Molly explained her approach; “I worked the top after doing Rollito for the first time but then we went to Siurana for a weekend. When I came back I gave it a send go straight away failing on the big tufa move down low but carrying on up to refresh my memory of the top again. I then did it the next go - the bottom was definitely the hard part for me!”

What’s interesting here is that Molly sees climbing outside as a way to improve her indoor comp climbing. Here’s what she said when we spoke to her about doing  La Fabelita (F8c) earlier in December; “I’d love to incorporate more rock climbing into my comp training; I think there’s a lot to be learnt outside, and much I can take with me into the mats!”

Well fair play to Molly, sending her second F8c so soon after the first is a statement of intent it seems!

Finally, CLIMBER asked her how she felt now as her 2018 season is coming to an end given that a year ago when she visited Santa Linya she was awaiting a major finger surgery to repair a tendon; “Yeah! Christmas is always a good time to reflect and I actually had to remind myself of my situation earlier this year; hard to believe I had almost 'forgotten' that was only a few months ago! I'm really pleased with the end of the year; but not just because I climbed some 'hard' routes, but because I managed to make a connection with rock climbing and feel like I was actually improving like I could indoors.”

So, time to chill over Xmas? “Now that I'm back indoors I'm pretty psyched to train for one last trip to Spain and of course next comp season! Of course a few days at home with the family for Christmas but there might be a bit of conditioning in there between Turkey and Christmas pudding .”

Stay in touch with Molly on her IG page here…