Following our Malham news item earlier today we can now also report that on Friday last Mina Leslie-Wujastyk polished off The Oak (F8b), a route considered by many to be perhaps the uber classic power endurance ‘catwalk route’ at Malham. 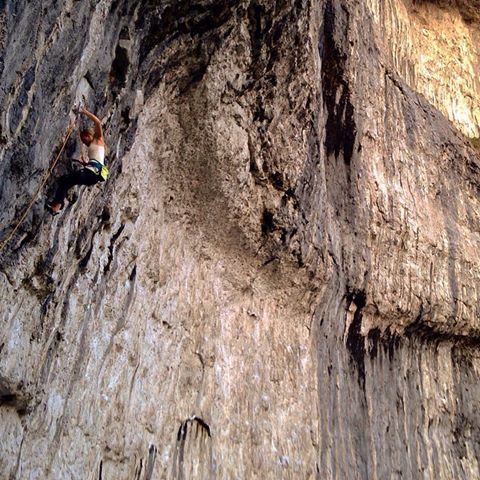 Following her success on Mecca Extension F8c in the autumn of last year (click through here for that report) Mina gifted herself some down-time over the winter something which is increasingly seen as the smart way to climb and train. Although it’s been a mixed spring so far the ‘Malham bus’ (ie various cars) started running early this year from Sheffield and many folks, including Mina, have been hard at it for a while now.

Mina reported her successful ascent on FB yesterday – albeit with a few rather cryptic comments; “So psyched to finish Austrian Oak (8b) at Malham yesterday, what a battle! This one took a lot from me; tested my body, my confidence and my ego!”

Keen to get the inside story behind Mina’s ascent we got in touch with her with a few questions:

First of all - congrats on nailing The Oak. Good to get an 'early season confidence-boosting' tick under your belt? Thanks! Yes it felt really good to clip the chains. I had some time off climbing early in 2015 so it was nice to feel physically and mentally back in the game again.

Conditions are so critical at Malham - how have they been for you? It's been very up and down with lots of rain in March which meant that the route was wet for quite some time. I find that, when it's dry, so long as I wait for the shade, it feels good. If I rush and get on anything in the sun, it feels two grades harder! So there was a fair bit of frustration along the way with wetness and then when it dried I had to be restrained and tactical with the sun!

What did you think was the hardest aspect of The Oak? The Oak is classic power endurance. From pulling off the ground, there are no easy moves until you are nearly at the top, and no rest that you would do more than a quick shake on (or I can't anyway!). Each individual move feels burly and powerful but manageable; putting them all together is the real test. I think for this kind of route, bouldering strength helps as one really needs to be over-strong on the individual moves in order to link them all together.

What will you take away from the experience? Wow, a lot in the case of this route. I got into what felt like a real red pointing saga with it. I fell off near the top countless times, progressing by a foot move at a time and then going backwards on it! It felt like a really big test for my confidence and my ego as well as for my body. In the end, I learnt that perseverance really does work and that grades can be pretty irrelevant to how hard you find something!

Would you care to share what's next on the agenda? Yes, I am really keen to get stuck into trying Bat Route. I have tried it a bit already (on the days that Austrian Oak was wet) but until finishing The Oak, I couldn't mentally or time-wise move onto it. I stuck with The Oak because it's a great route, it felt significant personally to finish it and also I figured it would kick me into shape for Bat Route too!

So quite a battle then by the sounds of it but well-done to Mina for persevering with the route in the face of adversity.

For anyone unfamiliar with the Austrian Oak it’s a route with something of an ‘interesting’ history. Although properly called the Austrian Oak, it’s colloquially known by all as The Oak. It was first done by John Dunne back in 1987 in the midst of Malham’s early sport development. Dunne named his new route after the Austrian body-builder Arnold Schwarzenegger. Although it’s a super sustained route with generally quite poor feet it is surprising to many that Dunne gave The Oak a ‘mere’ F8a+ at the time. In all probability, this was in part a reaction to the drumming which he’d had the year previously when he had done The Maximum – a route which Dunne initially gave F8b to but which was subsequently cut back to F7c+. Dunne’s retort was to do Magnetic Fields – a route which he gave F8b to and which still considered correct today. The Oak, climbed the year later, was done in the aftermath of this grading debate; no doubt as The Oak ‘has no stopper moves on it’ in comparison to Dunne’s neighbouring route, Magnetic Fields,  it slotted in at F8a+ in Dunne’s battle-weary mind. And so it stayed until it was finally upgraded in the 2005 Sixth Edition of Yorkshire Mountaineering Club definitive limestone guide. Today, it’s considered mid-table F8b by most climbers although it’s not uncommon for folks to have a battle-royal on it.

Finally then, many thanks to Mina for sharing her experience with us; an experience which will resonate with a few we think. Stay in touch with Mina through her website here…   We wish Mina the best of luck with Bat Route too.