After considerable effort over winter Mike Adams, one of the sport’s dark horses, has added two more new Font 8c’s to the Far Eastern Limestone. 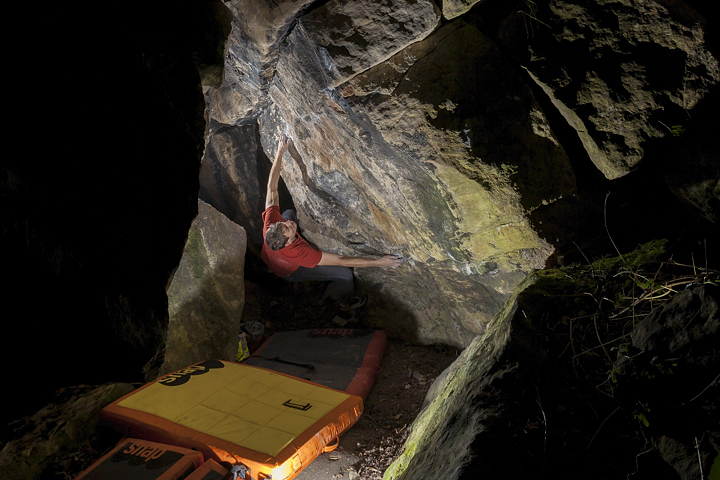 Mike on the first of his latest additions; Bordello at Earth Quarry. Photo Tony Simpson

Mike, long an enthusiastic advocate for the limestone east of the Peak District, has devoted considerable time and effort into the area; it’s time and effort which has been richly rewarded with numerous hard blocs. When CLIMBER last reported the action over in the Far Eastern area, the news then (click thru here… ) was that Mike’s friend, Dawid Skoczylas, had joined the Font 8c bouldering club by doing the third ascent of Mike’s Serenata.

Tony Simpson, Mike’s friend and photographer, has given CLIMBER the details of Mike’s latest additions.

“First up was a bloc named Bordello - a very obvious rising traverse emerging from the blackness within the cave at the rather scruffy and hidden quarry that is the Earth Quarry. From a tricky and elongated start, the problem gains the large sloping ramp before heading rightwards across the blank wall underneath the large break of High Riser and finishing scarily around the lower arete of High Rise. 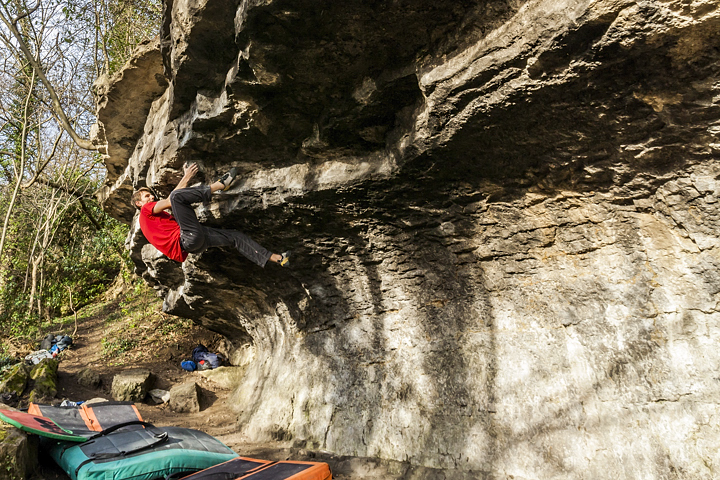 Mike on the second of his latest additions; Serenation at Impossible Roof. Photo Tony Simpson

Mike then turned his attention to the so-called “The Impossible Roof”. His objective was the very hard right-hand finish to Serenity. Mike sent this a couple of weeks after doing Bordello. Serenation climbs Serendipity to just below the jugs on the bulge before heading rightwards strictly following the holds on the lip to finish up another of his own creations Tomahawk. Mike believes that the moves on Serenation aren’t as hard as Bordello, but they’re harder than Serenata, which itself is 8c – hence Mike gave Serantion Font 8c as well.”

Putting this into context Mike Adam has now done more first ascents of Font 8c than anyone on the scene. His Far Eastern Limestone trio include some of the hardest blocs in the country. In case anyone is looking to get involved Mike has kindly put his trilogy into ascending order for CLIMBER. So, Mike’s thoughts are that “Serenata is low in the grade, Serenation is mid-grade and finally Bordello comes in at the top of the grade.” So now you know – plan your sessions accordingly!

Thanks to Mike and Tony for the details and photos.