News is emerging that earlier this week Mick Fowler and Paul Ramsden succeeded on the first ascent of the North East Face of Hagshu.

Hagshu, a 6,515m (21,375ft) peak in the East Kishtwar region of the Indian Himalaya, has seen only two successful ascents before now both of which were in 1989. Although the route had been attempted previously in the late 80s by a team lead by ex-SAS and climbing instructor John Barry, no one had ever climbed the North East Face until now. 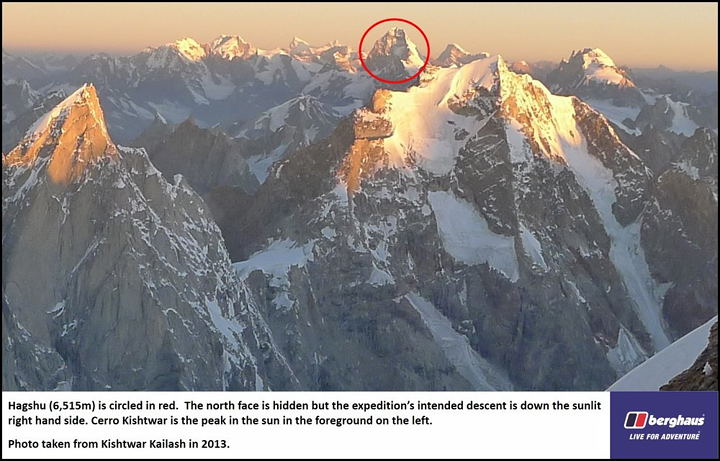 Updating Berghaus, his sponsors, Mick Fowler confirmed “…all good here with the run of successful trips continuing. Paul and I managed the first ascent of the North-East face of Hagshu followed by a traverse of the mountain to descend by the route that was followed by the first successful climbers of the peak back in 1989.

“The climb was a total of six days round trip from base camp. Our climb was brilliant and we should have some great pics and footage.”

It’s been said in the past that “Hagshu is to Kishtwar what the Matterhorn is to Zermatt. Before he left on the expedition Mick Fowler, said: “I first spotted Hagshu when making the first ascent of nearby Cerro Kishtwar in 1993 and was reminded what an eye-catching peak it is last year while on Kishtwar Kailash with Paul.

“This spectacular North Face is now a plum objective in that part of the world and we are very pleased to have been promised a permit to attempt it by the Indian Mountaineering Foundation.”

Along with Mike Fowler and Paul Ramsden, Steve Burns and Ian Cartwright were also selected for the team which left in mid-September.

A Berghaus spokesperson said Fowler was expected back in the UK later this week.