As usual, the international competition climbing season got underway over the weekend with the WC Boulder competition in Meiringen, Switzerland; the event was shrouded in controversy and drama however. 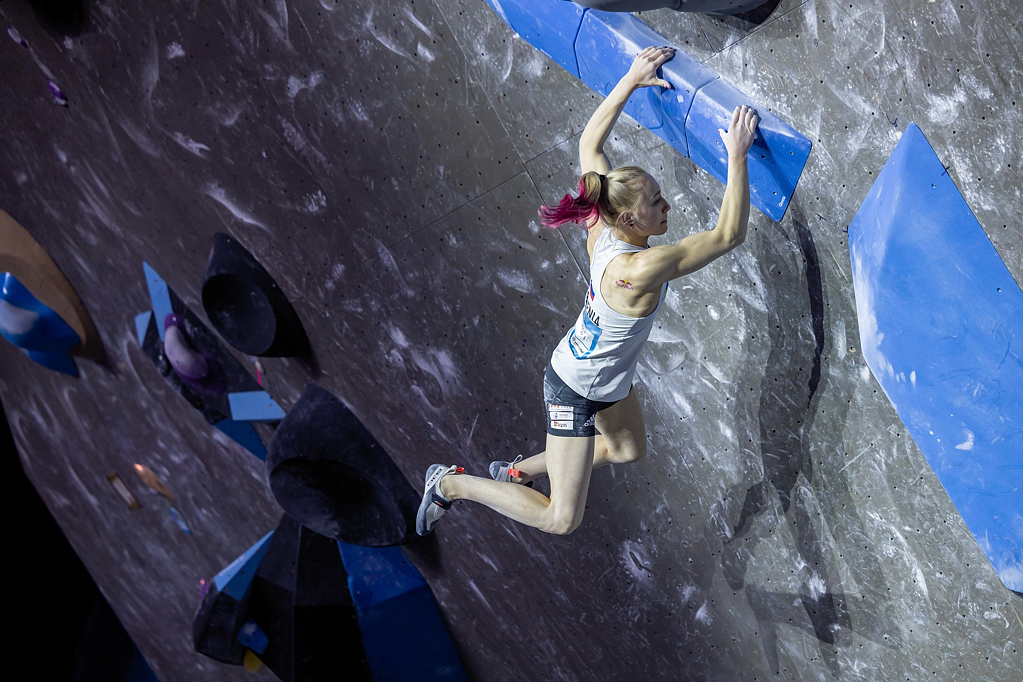 Sport climbing, having “made it” into the Olympic rota in 2021, continues to develop – not least as the next Olympic cycle is only two years away! We’ll see a new format for the Paris 2024 Games under which Speed Climbing will be separated from Lead and Bouldering; likewise, a new scoring system will also be introduced. Whilst some of the 2021 Olympians, Shauna Coxsey and Akiyo Noguchi to name but two high-profile climbers, have stepped aside from competition climbing many are back for 2022. Also in the 2022 mix are a raft of newbie seniors WC competitors; collectively, they’re all share the same goal – to win!

Controversially, for the athletes at least, the IFSC produced two significant, last-minute changes for Meiringen; the traditionally free-to-view live-stream “disappeared” across Europe behind a paywall and competitors were shown photographs of the qualification blocs prior to the round for the first time.

This is the second time that the IFSC have sought to monetise the live-stream. Back in 2017 the IFSC caused a massive stir when they sold the streaming rights for the competitions much to the disgust  the athletes who objected. Ultimately, the IFSC U-turned and re-instated the free-to-view live-streaming service. Now it seems, and once again – with little or no athlete consultation – the IFSC have sold the streaming rights to the semi-finals and finals in Europe. European views wishing to watch the semi-finals and the final live at Meiringen needed to subscribe to Discovery+ or Eurosport Player. Alternatively, those happy to watch 24-hours later could still do so by turning into the Olympic Channel. Results of an unofficial pop-up, on-line poll into viewers intentions suggested that the majority (54%) would not watch the event, a third (35%) would use a VPN (Virtual Private Network) to watch whilst only 1 in 10 (11%) would subscribe to the pay-to-view service. Once again athletes have said that their wish is for the competition to be free-to-view and that they will not support putting the streaming behind a paywall as they believe it will reduce to audience for the sport and hence their visibility which will in turn impact on their financial positions. The IFSC have yet to make any further announcements about the streaming going forward.

The second major change, and again in direct contravention to the athletes wishes, the IFSC for the first time provided photographs of the qualification boulders to the competitor and coaches prior to the round. Not only do the athletes prefer to face the boulders without prior viewing but the implementation was flawed when some competitors only saw the photographs when they arrived in the warm-up zone. Again, the IFSC have yet to make any announcements about providing photographs of the qualification boulders going forward. 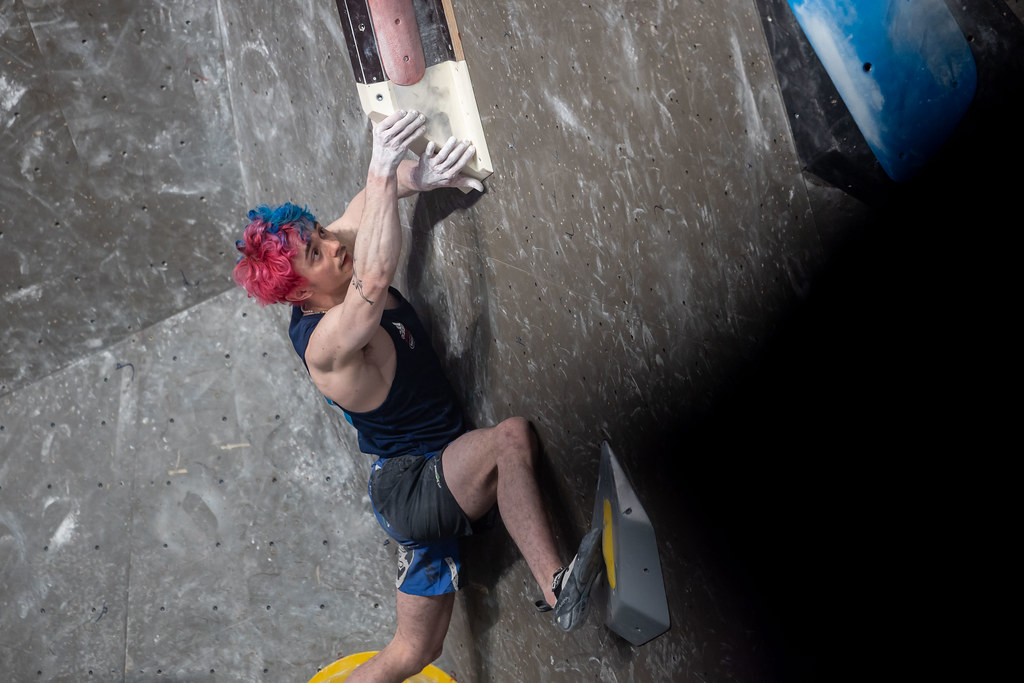 Notwithstanding nearly 200 athletes were on the starting line-up for Meiringen. Included within their ranks were eight athletes wearing GB vests; Max Milne (GB 2021 Boulder Champion), Nathan Phillips, Alex Waterhouse and Billy Ridal as well as Emily Philips (GB 2021 Boulder Champion), Molly Thompson-Smith, Hannah Slaney and Jen Wood. Japanese climbers, as well as Americans were also out in Switzerland in force; interestingly, and conspicuous by his absence, however was Adam Ondra.

The Women’s qualifiers were held first and it was nothing if not business-as-usual given that Tokyo 2020 gold medalist Janja Garnbret (SLO) finished with five tops and five zones. Ayala Kerem (IRL) topped the second women’s group also with five tops and five zones. Natalia Grossman (USA) and Brooke Raboutou (USA) finished in second position sharing the same score – four tops and five zones. Maintaining their consistency both Garnbret and Grossman finished in first and second place in the semi’s and again in the final. Third place in the women’s final was very close between Andrea Kumin (SUI) and Oriane Bertone (FRA) with Kumin prevailing ahead of Berone. Whilst Garbret and Grossman continue where they finished 2021 other top-names didn’t fare so well; Mia Kiample finished in 25th, Mino Nonaka 27th, Lauri Rogora 35th. Molly Thompson-Smith was the highest placed Brittish climber with a sold two-tops - enough for 31st place; Emily Phillips finished in 57th, Holly Toothill 64th and Jen Wood in 69th.

As remarkable as Garnbret’s performance was – she flashed three of the final blocs and topped the fourth on her second attempt – her win meant she scooped her 32nd gold World Cup medal of her career. Drama followed the competition however as she confirmed that she will NOT be contesting any more of the World Cup Boulder event this year as she prepares for Paris 2024:

“Today’s win was a privilege. It means a lot to me because it’s not obvious that you will win every competition – each competition is a story in itself. Just because you won everything last year doesn’t mean that you can next year, so every win means a lot to me. That’s why I was so emotional!”

“I’ve decided to skip the [rest of the] Boulder season this year. The Olympics last year were a pretty hard take on physical and mental preparation, so I feel that I need a little time off from comps and this year is the perfect year to do that. I already have [the Olympic Games in] Paris in mind!” 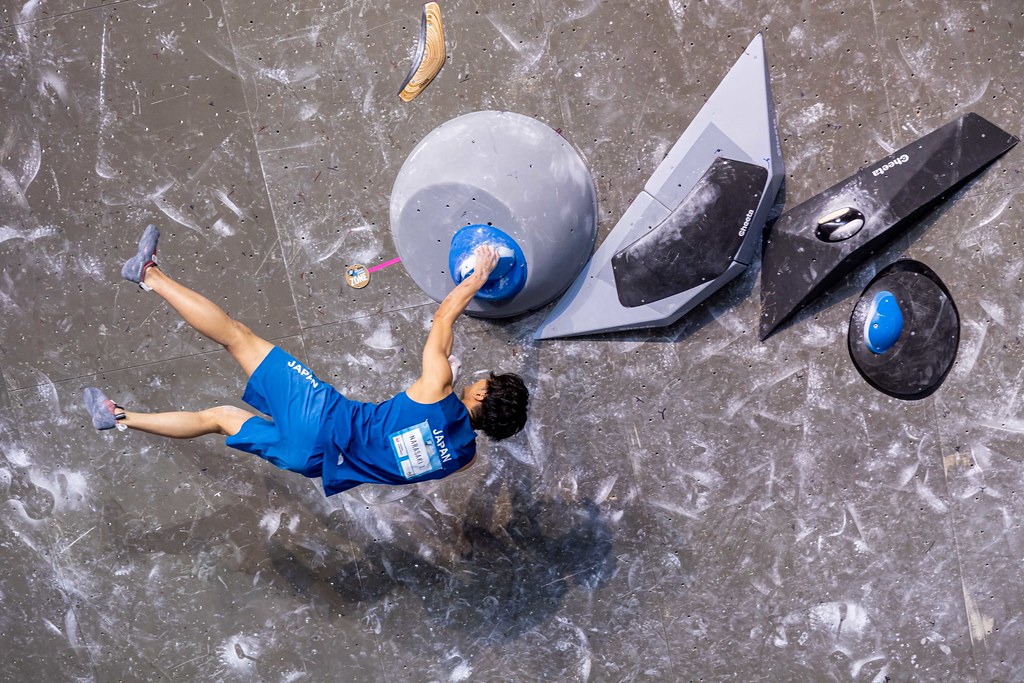 Bouldering power-house Tomoa Narasaki (JPN) and Zan Lovenjak Sudar (SLO) topped the men’s two qualification round, the Slovenian alone getting five tops; Narasaki getting four. Team Japan and Team France did remarkably well with five and four of their athletes respectively going through to the semi-final. Olympians Colin Duffy (USA), Mickael Mawem (FRA) and Alex Megos (GER) finished in 4th, 5th and 6th respectively but flying the flag for the Brits was Max Milne who finished with an storming result in 7th progressed in an very comfortable position into the semi-finals. Several Olympians had a tough qualification round finishing well off the position they would have hoped for; Nathanial Coleman (USA) finished in 21st, Jongwon Chon (KOR) 23rd, Jakob Schubert (AUS) 37th and Alberto Gines Lopez (ESP) in 80th! Set against that back-drop Nathan Phillips finished in 33rd, Hamish McArthur in 41st, Alex Waterhouse 43rd and Billy Ridal in 51st.

The men’s semi-final was a low scoring round and only Tomoa Narasaki and Kokoro Fujii (JPN) finished with four tops. Max Milne finished semi’s with two tops and four zones – enough to finish in 8th place - sadly just short of the finals. Nevertheless, an 8th place finish is an incredible result for the young Scottish climber – almost equalling his previous best a 6th place finalist in 2021. Milne will clearly be looking for more for the rest of the season.

The final round was full of excitement, especially for Tomoa Narasaki. Having flashed the first boulder, Narasaki had a nightmare on #M2 and #M3 and was trailing the leader board in 6th position with just the final boulder to climb. However, Narasaki absolutely aced the final bloc and jumped from 6th to first place ahead of Yoshiyuki Ogata (JPN) and Mejdi Schalck (FRA) who finished in 2nd and 3rd respectively. Narasaki’s win earned him his fifth IFSC World Cup medal. After the competition Narasaki said:

“I feel that the energy of the audience generated my power and finally I could reach the top. That was an amazing moment for me!”

“The target for this season is quite obvious for me – to be a third time overall [Boulder] champion. I found today that the style of Boulder route setting seems to be more dynamic, so maybe I need to make some adjustments for the coming competitions.”

The next stop on the 2022 IFSC World Cup Series tour will be the South Korean city of Seoul, where World Cup events in Boulder and Speed are scheduled for May 6th through to May 8th.

Watch the Meiringen finals on the Olympic Channel here.