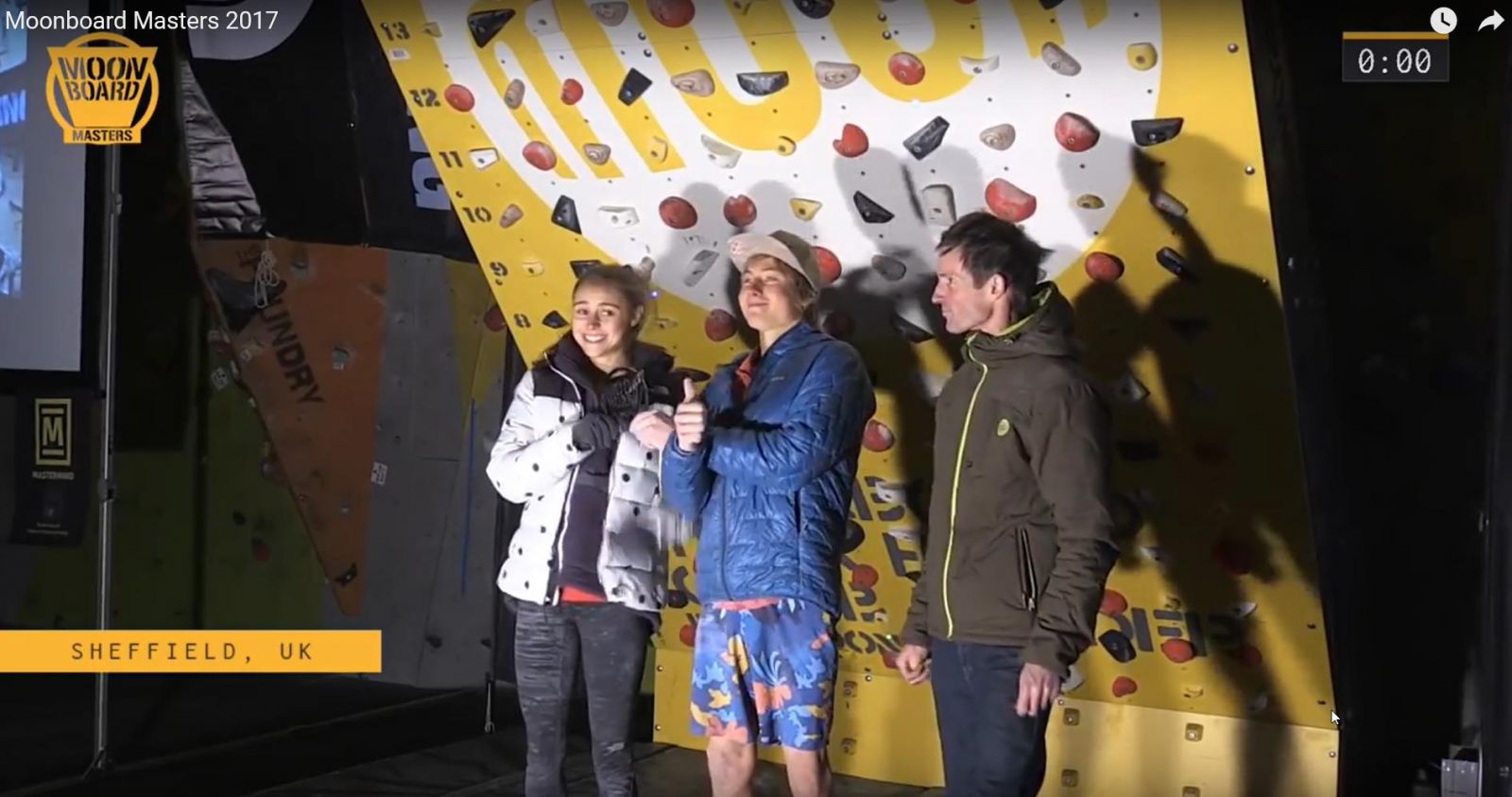 Alex Megos and Margo Hayes, winners of the 2017 MoonBoard Masters, with Ben Moon at The Foundry, Sheffield

An inspired piece of real estate from the master blocmiester himself Ben Moon, the MoonBoard  has become a firm favourite in gyms around the world over the last few years. Building on that success, Ben dreamed-up the MoonBoard Masters. Teaming up in five pairs at four gyms, the ten competitors for the 2017 MoonBoard Masters each set and then attempted each other’s problems whilst being live-streamed around the world. The competitors set their own blocs in advance of the competition on the new MoonBoard 2017 holds which, for the first time, incorporated a new range of wood holds. Starting in the UK, Alex Megos and Margo Hayes first demonstrated their own blocs in front of an enthusiastic crowd at The Foundry Climbing Centre. The other climbers; Rustam Gelmanov and Katja Kadic at Sharma Climbing, Barcelona; Daniel Woods and Kyra Condie at The Cliffs, New York City; Toma Narasaki and Akiyo Noguchi together with Jongwon Chon and Miho Nanaka at Crux Climbing, Osaka, Japan then took it in turns to try the two problems set by Alex and Margo over a fixed five minute period. Rustam and Katja then kicked-off Round #2 by demonstrating their problems whilst the others watched before attempted the problems in turn. In total, the MoonBoard  Masters featured five rounds with each pair kicking-off the round. Points were awarded based on the row number that the climbers held on the various problems. Each row was worth ten points – with an additional 20 points for getting the match at the top of the problem and another 20 points going to any climber who flashed a problem. The max score therefore was 220 for a flashed problem or 200 for a problem that was topped on the second or subsequent attempt. The lower a competitor came the lower the score they picked-up. The scores for the two climbers at each location were added together thus giving a team score. 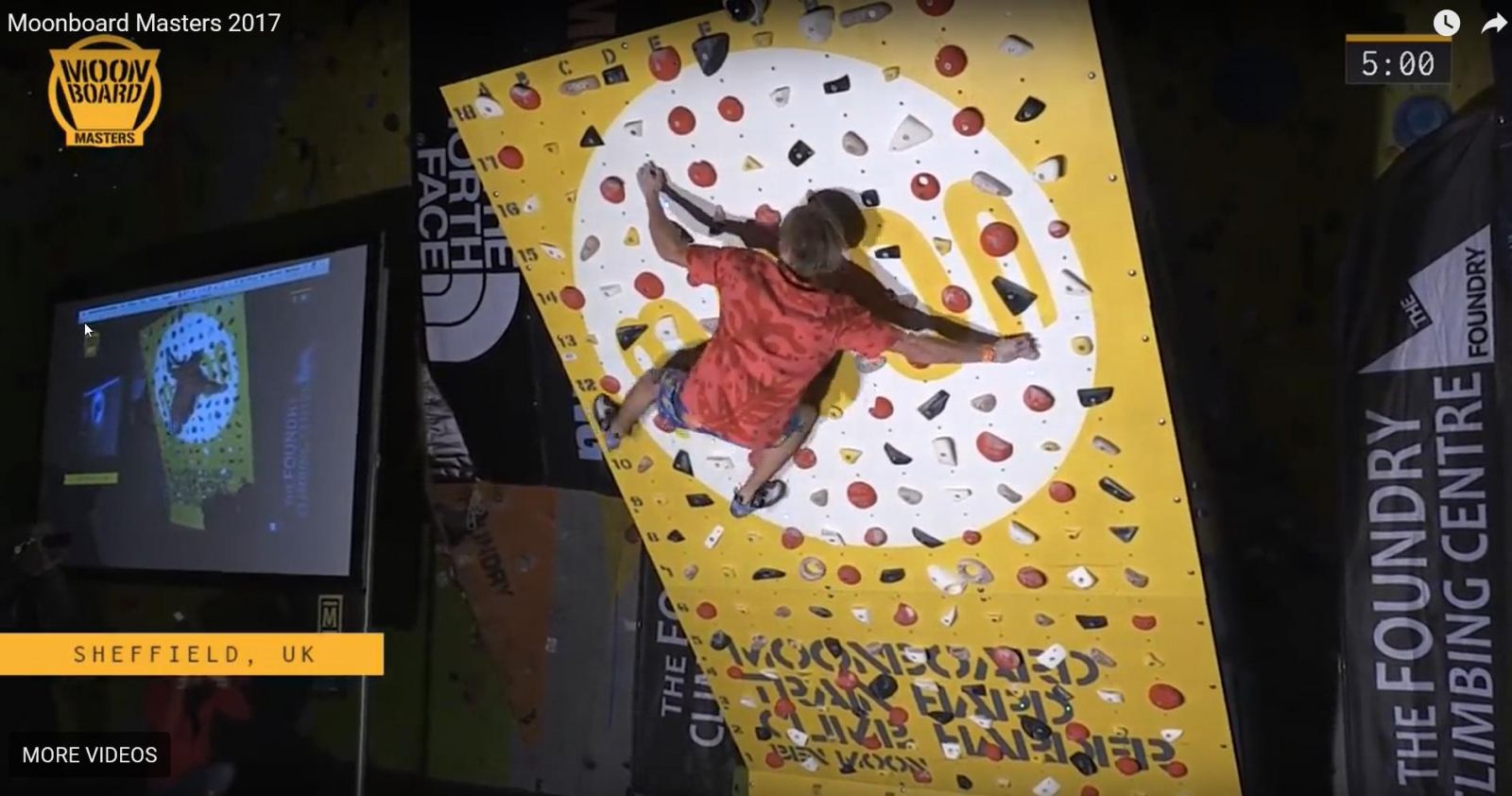 Alex flashing his own bloc to take 220 points - a perfect start to his comp at the Foundry.

The action got underway at the Foundry, Sheffield at c.14:00 hrs GB time with Alex and Margo having the perfect start; both climbers flashed their respective problems and added 220 points each to their team score. Perhaps not surprisingly, both Alex and Margo set problems that suited their particular skills; Alex’s bloc featured long powerful moves whilst Margo’s had a very tricky match on a super small hold. None of the other climbers topped either Alex’s nor Margo’s bloc in Round #1. 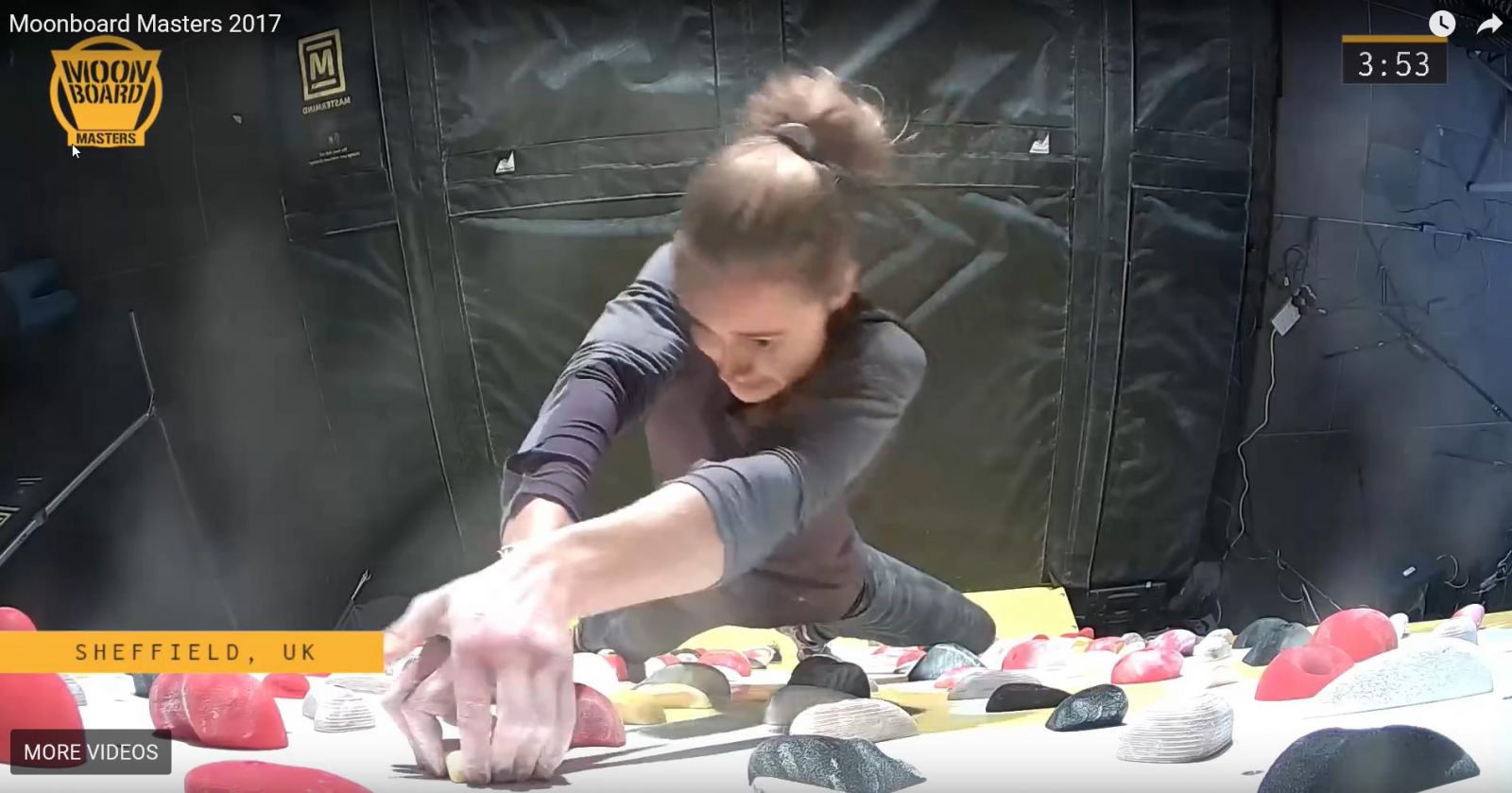 Margo, following Alex’s lead, flashed her problem to get 440 points on their scorecard within seconds of the comp starting

For Round #2 the action switched to Rustam Gelmanov and Katja Kadic at Sharma Climbing, Barcelona. Sadly, for them, they didn’t top their own blocs; that honour fell to Tomoa, Jongwon and Alex. Interestingly, Tomoa also eliminated one of Rustam’s holds as well! Kyra and Akiyo both flashed Katja’s bloc whilst Margo got it on her second attempt. By the end of the Round #2 the Sheffield team had a commanding lead over the Osaka 2 team of Tomoa and Akyio.

Rounds #3 thru #5 continued with Alex, Tomoa and Jongwon continued to flash or top out each bloc in turn. Rustam also topped bloc #3 but Daniel Woods was having, as commentator Leah Crane said, a ‘heavy gravity day’. Flashes and/or tops for the female climbers were a little less forthcoming except for the bloc in Round #5 which everyone flashed or topped. 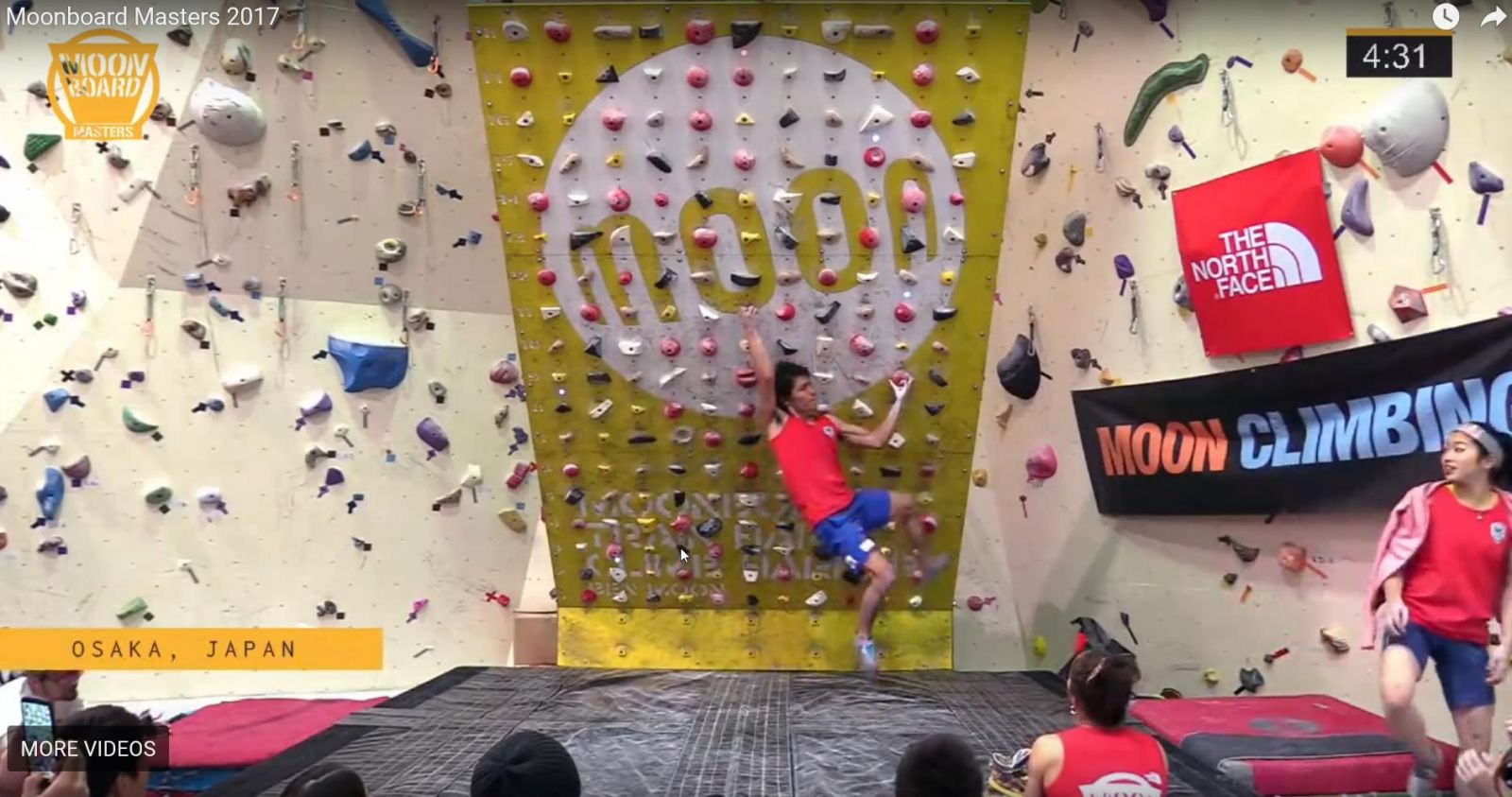 Tomoa flashing his round #3 bloc which featured a footless ‘clock’ sequence – one of the more inventive blocs of the comp!

Alex Mego’s was the clear winner  in the men’s stream although joint second placed climbers Tomoa and Jongwon were only 60 points shy of Alex’s 1060 total. Margo finished on 840 points just 10 points ahead of second placed Kyra. Akyio and Katja finished on 730 points each with Miho just behind on 700 points. Jointly, Alex and Margo were convincing winners of the 2017 MoonBoard Masters. 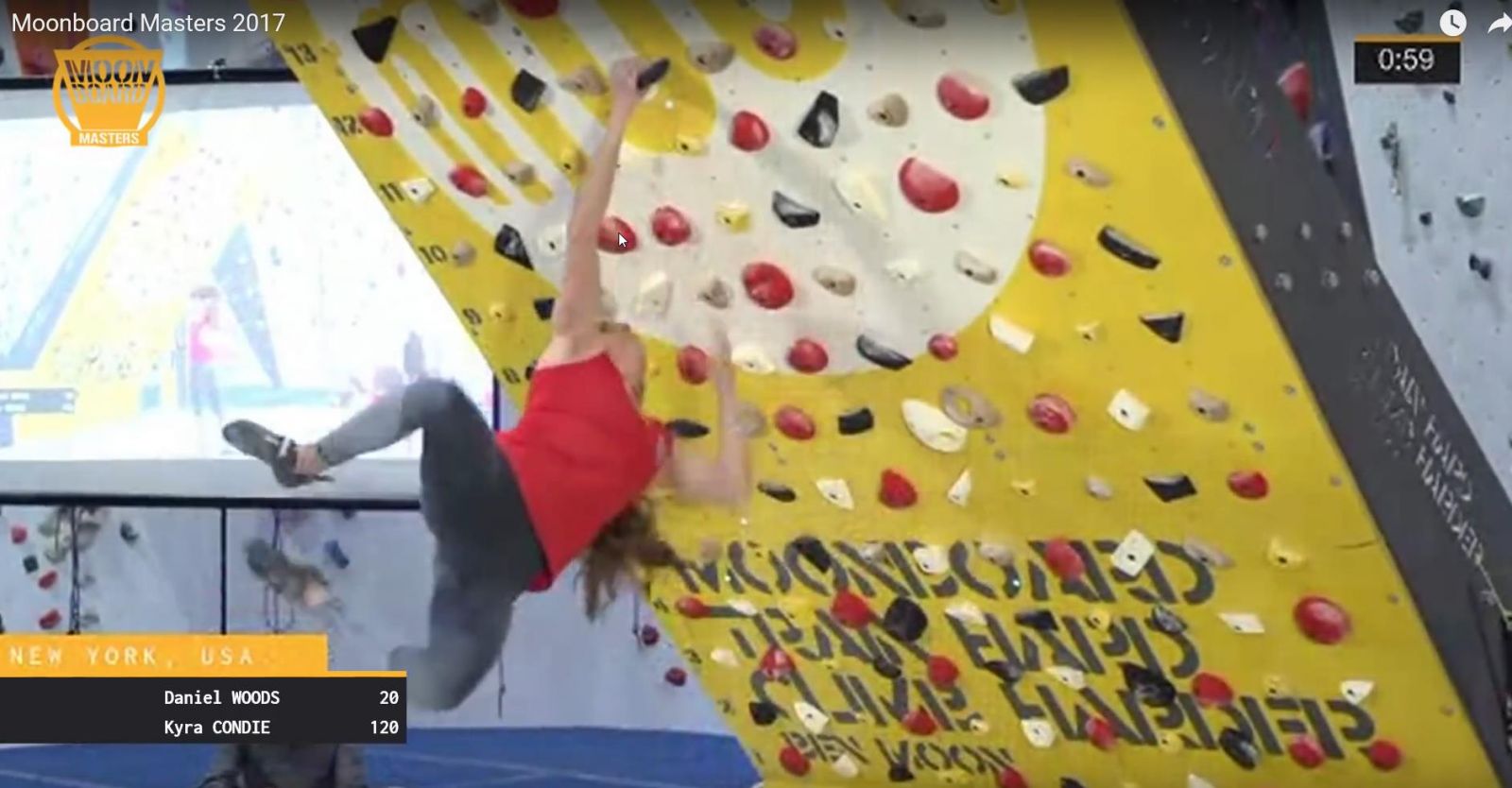 Kyra catching the first of two mahousive dynos on her Round 5 bloc which resisted all attempts - including her own!

CLIMBER have been in touch with Ben Moon for his thoughts on how it all went and, crucially, whether the MoonBoard Masters be back next year…

So, pleased with the Comp then Ben?

I am very pleased with how this first comp went and we will definitely be doing another one in 2018. We had a few issues with the internet dropping out which affected the live stream for a couple of minutes but apart from that it went very smoothly. The feedback from both the competitors and viewers has been very positive and most of the competitors want to come back again next year which is good to hear. I feel really hindered to have had such a stellar line up for this first comp and it was great to see them going head to head on some short basic style problems which are very different to what we are used to seeing in the world cups. I think it just goes to prove that you don’t need to have loads of volumes and weird parkour styles problems to split the athletes up and give a good viewing experience.

Given the myriad of potential techie issues with something so ambitious did you sleep better after the comp had finished?

Yeah definitely! I am psyched to have done this comp but I am glad it’s now over.

Can you give us the low-down on the new set for the MoonBoard?

The new MoonBoard Masters 2017 set up includes two new sets of MoonBoard holds. One set of 52 resin and 1 set of 32 wood. These sets combined with the existing sets give quite a lot of hold styles variety now so we just wanted to make sure that all the different styles were spread evenly around the board. The other cool thing about the new set up is that it fills all 198 t-nut spaces.

The new wood holds looked sweat – how did they go down?

They went down very well. Although they are very top end with the minimum grade required around 7b they climb great. You really have to squeeze them and work hard to keep your feet on. It was nice to see that the competitors used holds from all 5 sets and not just from 1 set. I think this shows we have a good varied set up now.

Will the MoonBoard Masters be back next year and are you hoping for it to become a regular event on the comp calendar?

Definitely back for 2018 and hopefully with some UK participation. We are considering having a qualifying round that would be held at gyms around the world and then taking a couple of wild cards from the qualifiers. It should be good.

To read more about the MoonBoard Masters visit the website (www.moonboardmasters.com) here and watch the comp in full below…