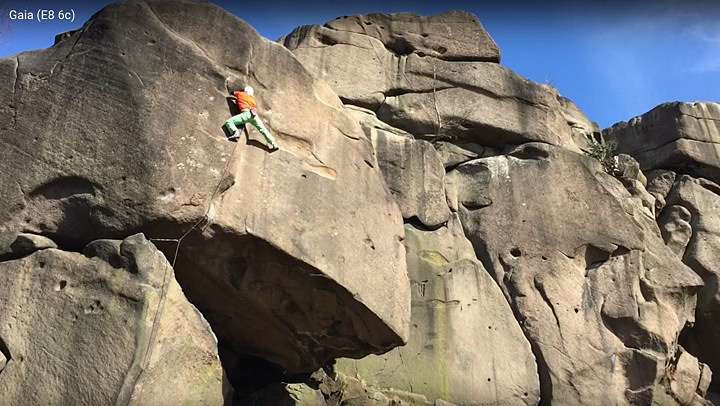 McColl has written extensively on his blog about doing Gaia. Like many overseas climbers watching Hard Grit was the start of it all as Sean explains; “I first saw a video of Gaia in the movie Hard Grit.” Again, like most people watching that film, the footage of Jean-minh Trin-thieu falling off the top of Gaia is etched into their memory. McColl again; “the climber falls in the crux of the route, comes within a few feet of the ground and absolutely hammers the corner, spinning a few times. It looks as though he breaks his ankle but I’m told that he was actually ok. Never-the-less, the falls looks absolutely terrifying, hence the E-grade.”

It’s clear from Sean’s blog that doing Gaia had become something of a goal; “From as long as I could remember, after watching that movie, I wanted to climb that route. Over the past 15 years, I’ve seen the route pop up here and there of various people completing or falling on the line. Watching those clips only made me want to try it even more. My chance finally came as I booked my flight up to the CWIF this year. Graeme Alderson invited me up and said I could stay an extra day or two and try out the grit. As I had never tried it before, I was pretty stoked. I also knew it would be hard to climb outdoors after having just done a competition.”

So fast forward to the Monday after the CWIF. It was a superb sunny day in Sheffield and Sean and Jorg wasted no time in getting out to Black Rocks, setting up a top rope, working Gaia.

Jorg was the first to go for the lead. Sean describes Jorg’s ascent on his blog; “Next was Jorg’s ascent and he absolutely killed it. As I was belaying him, I was very aware of where his hips were compared to the placement, how much slack I had out and how quickly I could pull it in and step backwards. Nothing crazy was needed and Jorg hiked up the route with a giddy squeal as he pulled himself over the last arête. It really helped belaying Jorg and physically seeing how far he was above the draw; after he did it, I knew I’d be trying it as well.”

Save a bit of nervousness regarding placing the gear – Sean admits it had been 10 years or so since he’d placed any gear – he so then set off on lead.

Sean runs through his ascent on his blog; “I put the cam on my right side and the first one in my mouth, pre-clipped to the rope. I ran up the first few moves and placed the first piece. I setup my heel in the crack, leaned out and put in the second piece. I tugged on it a bit and decided to replace it just a fraction. I tugged on it a handful of times and it looked bomber. I clipped it and as Jorg told me before, I just forgot about it.

“I rested and composed myself in the no-hands before starting the route. I use the pocket method high and left and straight from the first move, I felt confident. The first pogo felt bomber and it made me feel light going up the middle section. I was up into the corner before I realized it and executing my very specialized hand and foot sequence.

“Those sequences of moves were so engrained in my mind that it felt like I was dancing a pre-rehearsed routine. I was matched on the final sloper before I realized I had finished the hard part and I was going to do the move. I stalled on the final sloper for a couple of seconds before campusing over the last bulge and crying out with joy! I had done it, and it felt great!

“As I scaled the last few meters of the top-out, my mind was in a flurry of emotion. For me, this was so outside my normal day it felt very surreal. The joy of doing something new and exciting gave me energy. As I ran down the backside, I could feel my legs, they were shaking… Jorg met me almost halfway and gave me a huge hug. We had both done what we set out to do that day, and both done it without any scary situations.”

Finally then, Sean sums up his experience which clearly has been rather profound – so much so that it sounds maybe that Sean McColl might even be back for more grit in the future?

“The experience was so different than anything else I’ve done in climbing; it’s hard to explain but I will try. The moves on Gaia are not especially hard, but doing them that high above a piece that you yourself have to place is unnerving. When I did the route, I did it with 99.9% efficiency and there was not a shred of doubt in my mind. It felt similar to competing in the fact that I was focused, I had one goal and I knew my ability. It felt completely different than competing having to put in a piece of gear and the fact that the moves were practiced. As I did the complicated section at the top, it felt like I was floating over a memorized sequence.

That’s the story of my first route/day/experience grit climbing. It lived up to my expectations and even pushed me a little bit. It was so cool doing it on top-rope first (thinking I wouldn’t lead it) and to slowly piece it all together with an ultimate realization that I could really do this thing properly on gear and of course on lead.

Rock Climbing is about experiences and this is definitely one I will remember for the rest of my life. A big thank you to Jorg Verhoeven for bringing me on this adventure!”

So there you have it – a double ascent of Gaia by CWIF 2016 winner Sean McColl and finalist Jorg Verhoeven.