Mat Wright has made the ninth ascent of Hubble this week adding his name into the history of the iconic UK test-piece. 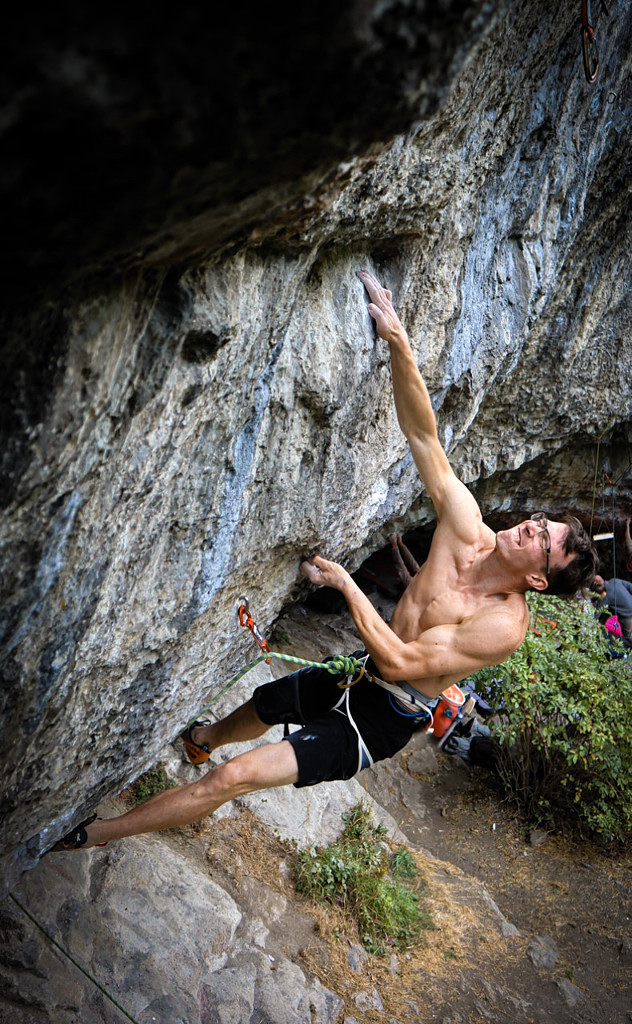 Originally climbed by Ben Moon back in 1990, remarkably few climbers have managed to repeat Hubble over the years; the current average being just three ascents per decade!! That makes any repeat of Hubble big news. Both Alex Megos (6th) and Will Bosi (7th) clipped the chains in 2016; Pete Dawson (8th) followed in 2019 and now Mat Wright has made the 9th ascent. For their respective views on Hubble click through for our reports on these recent ascents; here for Alex, here for Will and here for Pete.

Featuring what is generally accepted as V14/Font 8b+ bouldering getting involved with Hubble is a big commitment. Originally graded F8c+ Hubble is now widely considered to be F9a and as such one of the first in the world to be graded as such; Alex Megos being the only climber to suggest otherwise.

Love it or hate it, Raven Tor remains at the very centre of Peak District hard sport climbing.  The list of classic testpiece routes forming the ‘to-do’ lists of many rising climbers – Mat Wright included. Mat has been working his way through the list and he’s in absolutely no doubt that the Tor has been central to his development as a sport climber as he told Climber; “I absolutely love the place, for me it’s taken me from an F8b climber to a F9a climber, the routes are so inspiring to me and offer all kinds of unique challenges. You can either rat it out on some dirty crimps, or get pumped out your mind on jugs! Raven Tor has it all…”

Prior to Hubble Mat’s Tor tick-list included many of the harder routes; namely Mecca (F8b+), all three Mecca extensions – Mecca Extension (F8c), Hajj (F8c) and Kaabah (F8c+) – as well as Make it Funky (F8c+) and Evolution (F8c+). Remarkably, Mat climbed all three Mecca extensions within a one year period finishing off the trilogy with his ascent of Kaabah earlier this year in May. This was a special moment for Mat as he explained; “So damn psyched, I had to try so hard on the send go whilst being viewed from a short distance by the first ascensionist and nobody less than @ste_mcclure ?.”

Like many younger climbers today, Mat talks about his climbing, his aspirations and his concerns quite openly online. His posts have covered numerous topics not least his aspirations to climb Hubble, what he sees as his lack of power, his use and thoughts about knee pads on Hubble (and other routes and blocs) as well as mental health.

In an exclusive interview with Climber, Mat lays out the detail of his mission to climb Hubble, his use of a knee pad and what his plans are next…
---

Your tick list over the last few years is pretty remarkable; you’ve been steadily ticking off classic test-piece routes and blocs around the Peak and farther afield. Has doing lots of routes and bouldering been a deliberate policy or do you just like getting stuff ticked off?

To be honest, I don’t feel like I’ve ticked off that many routes. I generally enjoy projecting so the stuff I do in-between projects is just stuff which I feel like I could do fairly quickly. When I was first trying Hubble; I did enjoy only having a few goes then doing easier (high 7s, low 8s) after.

You’ve also had some long term projects. You obviously like mixing it up then albeit presumably as part of a plan?

When we talk about long term projects, we talk about routes or boulders which take a long period of time. Multiple seasons! I don’t feel like anything which I’ve done has been a real project in the grand scheme of things. Though, Hubble definitely taken the most work and is the first route I’ve had to specifically train for! Hubble taken me roughly 25 sessions this year. My friend sent his 4 year, multi-season project on the weekend prior to me doing Hubble which certainly was a project to him!

Let’s bring the conversation to Raven Tor. Last August you belayed Pete Dawson on the 8th ascent of Hubble; impressive enough but even more so given it was c.20 degs - totally sub-optimal conditions! Did Pete’s own battle help you in your quest to do Hubble?

Yeah Pete is one of my best friends, I love climbing with him and I learn so much when he’s around. The dude really knows how to try hard! Pete actually helped me a lot with Hubble, his instructions to me were “it’s Hubble, it’s never going to feel easy! Just try hard and crimp it!”

In a candid post last year you wrote about your own power. “Raw Power - Something I believe I've lacked in when compared to the level at which I climb. This is likely due to being a slightly taller climber. This winter, things will change, I'm more motivated than ever to overcome this. Hubble being the main route at which I want to climb next year, I'm going to need a lot of power!” Nothing like going public with your aspirations and goals; does that help you?!

Yes, I also written a post about my personal mental health problems. I think it’s very important to make sure that I don’t create a false image on social media where I make that I’m the perfect climber who’s got it all. I like to be as open as I can with people and showing people that I have to work hard too. It goes a long way and people will see this and know that these things ain’t impossible if you put your mind to it.

Hubble then. Back in April 2019 you wrote; “Three seasons so far. All but the crux moves done and starting to feel more possible.” You continued to zero-in on Hubble and then on Sept 19th this year you were clearly delighted with your progress writing: “Absolutely over the moon!! ?? Since starting climbing, Hubble is the one route which I’ve always wanted to do. I can’t quite believe that my dream is now starting to come true and it feels more possible than ever!” Can you describe the tipping point?

Yeah, I dabbled on Hubble first early last year. Though, I think I did put four sessions into it, I still couldn’t do the crux match, I was using the knee pad at this point too! I decided to leave it and do other routes first. So I climbed Evolution (8c+), Mecca Extension (8c), Hajj (8c), Kaabah (8c+) and eventually started running out of things to try. I wanted to get back on Hubble but found it very intimidating. My girlfriend Georgie said to me “you’re going to do it eventually, so why not now?” That changed me. I started trying it but didn’t take it too seriously for the first few months. I was finger-boarding a lot and had a trip to France after lockdown. Once I came back, my first pull on Hubble went insanely well, I managed to link three moves together on the crux, this was when I discovered that it was possible. About a month later, I was on redpoint and found myself dropping the last hard move from the ground.

It seems almost de-rigour to battle connies at Raven Tor. Has that been the case for you and if so how frustrating has it been and how did you handle it?

I think the conditions at Raven Tor aren’t too much of an issue if you just get on with it. Me and Pete are always there trying hard, even in mid-summer. We just pick the time to go and obviously don’t climb in full sun. When you climb there as much as me, you learn the times to go!

Let’s talk about the knee pad then. Opinions are split about the use of knee pads as you know; some climbers hate them whilst others just recognise them as advancements in gear. Sean McColl used a knee pad when he tried Hubble back in 2014 – albeit on his left knee. You’ve been using a pad on your right knee. You’ve not been shy about this writing online: “Now, for the people who care, the answer is YES, I’m using a right leg knee bar to do the crux... I still find this very hard, and relatively low percentage. I question if Hubble is still Hubble using this beta... of course it is. And I believe that it’s still 9a for me.” Presumably, being taller, the knee pad helps you on what must be a very bunched-up crux?

I think this is an important topic to discuss for sure. My opinion is, at the end of the day, we’re all just trying to climb the hardest possible way up a piece of rock, the way we chose to do that is personal and I think people shouldn’t care so much about silly little ethics like this. As long as the rock isn’t being damaged, it doesn’t matter. That being said, I’m glad that Hubble still represented a huge challenge to me as I couldn’t use the really good knee-bar which Sean McColl used. The knee-scum which I used probably made the move 5% easier. It didn’t take any weight off my arms, it just meant that I could fall off slower, giving me a little bit more time to stab my finger into the crux undercut pocket. I have no doubt that the way I climbed Hubble is still 9a in comparison to Evolution, Rainshadow, or Kaabah. I found the crux of Hubble very bunched, meaning that the undercut sequence felt incredibly powerful!

Back in January you did Keen Roof Extension (Font 8b) with a knee pad and then wrote; “Really pleased to tick this one off. Unfortunately, I used the kneebar to do this move, so currently working it do without and found this amazing drop knee ?” Give that comment might you consider returning to Hubble at some point sans knee pad?⁣

Ha! Maybe if I’m ever to run out of challenges at the Tor but admittedly, I use bouldering as training, I don’t go on routes to train so avoiding a knee-bar on a route seems much more silly to me than avoiding it on a boulder problem. Though, I know people who think avoiding boulder knees is stupid too!

Apart from Hubble what has been the highlight from 2020?

I would say going to France was the highlight of 2020 other than Hubble. I learnt a lot on this trip and I met some incredibly people. Kaabah was still a fantastic experience though!

You seem to have a path set out in your head to develop your climbing. Where might that take you now?

Myself and Georgie have been discussing moving abroad to France. I would love to go back to Ceuse and finish off Baa baa Black Sheep but I’m also incredibly psyched by Realisation, one of the first F9a+’s in the world.