News has emerged that Marek HoleÄek and ZdenÄ›k Hák have added Satisfaction, a major route to Southwest face of Gasherbrum I in the Karakorum. 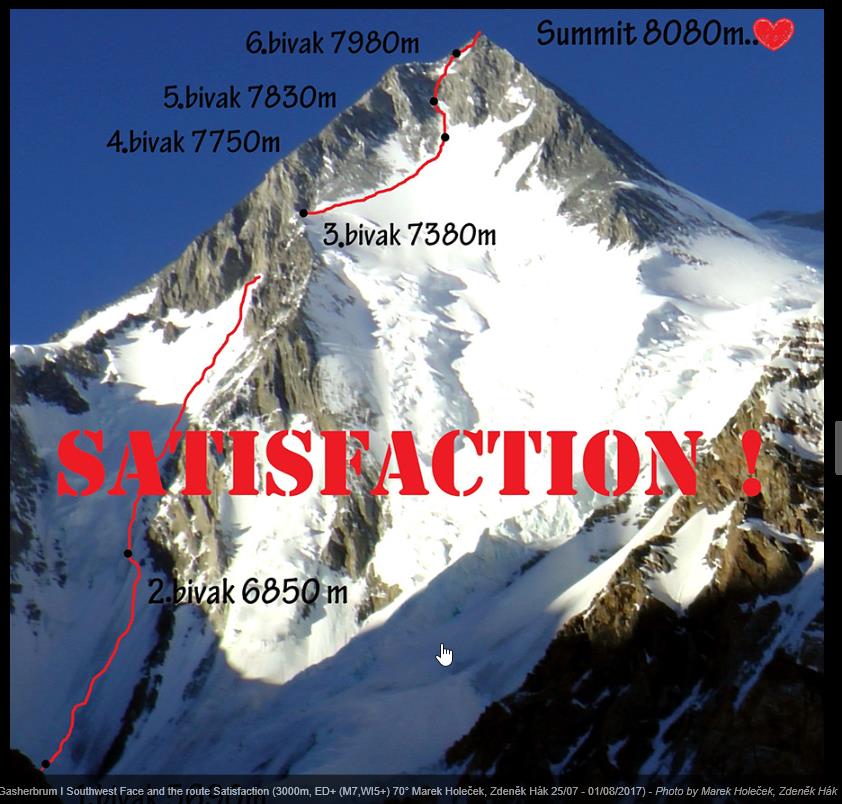 Planetmountain report that Czech mountaineer Marek HoleÄek, climbing with ZdenÄ›k Hák, has finally succeeded – on his fifth attempt - on his major line on Gasherbrum I. The pair summited on July 30th after spending six days on the ascent and two on the descent.

HoleÄek and Hák climbed their new route in alpine style taking the headwall directly. The breakthrough this year came when the pair breached the tricky rock passages above 7700 meters which opened up the summit. The pair reported poor condition: “Thin layers of loose snow and rotten granite proved to be a terrible combination! In some sections the actual climbing was so thin that we had to take off our gloves and look for unstable holds to pull on in order to make slow progress upwards.”

HoleÄek and Hák described the crucial climbing and then the descent: “Climbing the headwall took us three whole days. We made six bivouacs in total, and four days were spent at a critical height between 7400 and 8000 meters. The last bivy found us at eight thousand meters right below the summit.

Despite the heavy snowfall and strong winds on the north-eastern side of the mountain our descent started towards the Japanese couloir and the plateau at 7100 meters. On the next day the weather turned much better and we continued down through the Japanese coulouir, with sections of snow reaching our waists. Despite the acute avalanche danger we had no choice but to continue our descent."

Click through here for the full exclusive report on Planetmountain, including a review of the previous attempts.