Five climbers from five countries across three continents slugged it out over the weekend in Stockholm at what many consider to be one of the best bouldering comps of the year. 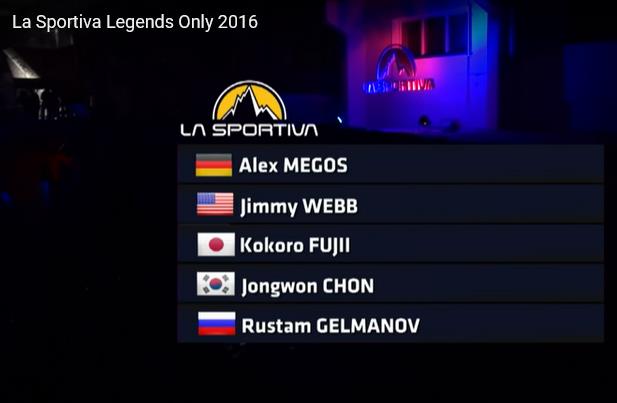 The La Sportiva Legends Only is just that; a bouldering comp sponsored by La Sportiva for legends only. And with a game-plan like that what could possibly go wrong?! Well for starters, there should have been six legends competing for said prestigious prize but sadly Tomoa Narasaki injuried his shoulder the very last day before leaving for the comp but, as they say, that’s bouldering for you!

The sixth year for the comp, the La Sportiva Legends Only is not like other bouldering comps. Firstly, it’s an invitation only event. Secondly, there’s only six climbers – five this year – in the comp. All the competitors attempt the blocs in rotation – meaning if a competitor fails to complete the bloc the next competitor goes next and so on. Finally, it’s a ‘worked comp’ so all the competitors tried the blocs in a specific session two days ahead of the comp.

All the competitors are top boulderers – although not all, Alex Megos and Jimmy Webb for example – don’t compete on the international comp circuit. The other three competitors, Kokoro Fujii, Jongwon Chon and Rustam Gelmanov however, are fully-fledged bloc competitors. Hosted by none other than Jerry Moffatt the five hombres slugged it out on the varied blocs. With commentary by Liam Lonsdale, grab yourself a coffee and pull up a comfy chair and settle down to watch some incredible and gripping action. The full video is below so no results as that would clearly be a spoiler…